Bird used an aggressive attack mode strategy to climb from fifth on the grid to score a ninth career FE win, five years to the day since he scored his first category win in Putrajaya in 2014.

Polesitter Alexander Sims easily held the lead off the line ahead of Mercedes pair Vandoorne and Nyck de Vries, as Bird harried Venturi Racing's Edoardo Mortara for fourth in the early stages.

Bird took his first attack mode activation on lap nine of what would become a 34-lap race, briefly dropping to sixth behind Jerome D'Ambrosio (Mahindra Racing) before getting back by on the following tour.

The British driver used his time in the 235kW higher power mode to shoot past Mortara on the run to the Turn 18 on lap 11.

After his initial attack mode activation ended, Bird was able to stay with the Mercedes pair ahead as they in turn chased Sims.

After catching back up to the top three, Bird used his power advantage over de Vries to take third on lap 22 at Turn 18, the right-hand corner at the end of the main straight that featured the most action.

But it was on the following lap that the defining moment of the race occurred as Bird caught up to Vandoorne, who then launched his own move on long-time leader Sims at Turn 18 that resulted in a slight touch and sent them both deep.

Vandoorne was able to lunge ahead and take the lead, while Bird nipped past Sims to take second.

Two laps later Sims took his second attack mode and dropped behind Lotterer, who had moved past de Vries when the newly crowned Formula 2 champion moved to take his final activation.

Vandoorne held first place until lap 27, when Bird again made a move stick at Turn 18 - muscling by to take a lead he would not lose despite late disruption from a crash involving Daniel Abt and Antonio Felix da Costa. 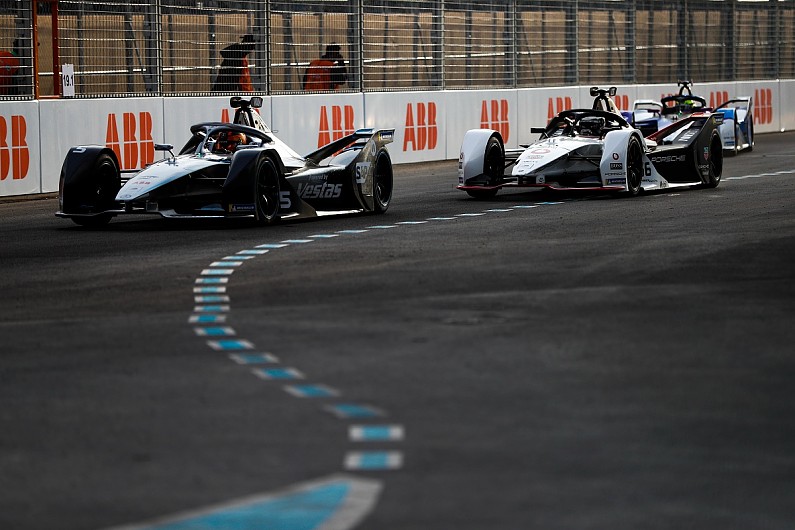 Vandoorne used final attack mode for the last time on lap 30, dropping behind Lotterer immediately, but the race was then suspended as it became clear Abt's car was stuck in the wall at the exit of Turn 5 after his apparent clash with da Costa, which will be investigated after the race.

The race restarted on lap 32 after a four-minute suspension, which resulted in a 4kW energy reduction, and Bird jumped clear - staying ahead of Lotterer to win by 1.319 seconds.

Oliver Rowland battled his way up to fourth late on, coming home ahead of Bird's team-mate Robin Frijns - who benefitted from a late clash between de Vries and Sims that dropped the latter to eighth.

De Vries took sixth on his FE debut ahead of Mortara, who dropped back from the early leaders as he struggled to activate his first attack mode.

D'Ambrosio finished ninth behind Sims, with Mitch Evans rounding out the top 10 for Jaguar ahead of Pascal Wehrlein.

Lucas di Grassi finished 13th from 19th on the grid after a tough race for Audi, with da Costa finishing 14th. Reigning champion Jean-Eric Vergne retired at the end of lap 22 with an apparent steering arm issue.

The other retirement was Sebastien Buemi, who retired in the pits after briefly stopping on track on lap three, while Nico Muller failed to take the start for Dragon Racing.