Jake Hughes took provisional pole for the Macau Grand Prix with the event's fastest ever Formula 3 qualifying lap, in a dramatic session plagued by red-flag stoppages.

Hughes set a lap of 2m06.793s in the HWA squad's first ever visit to Macau, although a second qualifying on Friday is likely to shake up the order when the track is rubbered in.

The new FIA F3 car had already produced scintillating times before qualifying. In the first timed session of the weekend, Ferrari Formula 1 protege Marcus Armstrong set the pace in practice one as the top six all lapped quicker than last year's pole time.

Red Bull Formula 1 junior Juri Vips was the first driver to dip under the 2m07s barrier, setting a 2m06.943s with 19 minutes to go.

But just two minutes later Macau veteran Hughes jumped to the top of the order for his event newcomer team.

Vips's lap was enough to take third for Hitech Grand Prix, after he was jumped in the closing stages by David Beckman. The German driver looks to have rekindled his GP3 race-winning form with Trident, rejoining the team after an unsuccessful spell with ART Grand Prix this season in FIA F3.

Armstrong was the top Prema Racing driver in fourth, as his team-mates both suffered from myriad traffic issues despite showing flashes of pace.

Rounding out the top five behind Armstrong was American driver Logan Sargeant, buoyed by Carlin's improved pace in Macau so far compared with its season of FIA F3 this year. 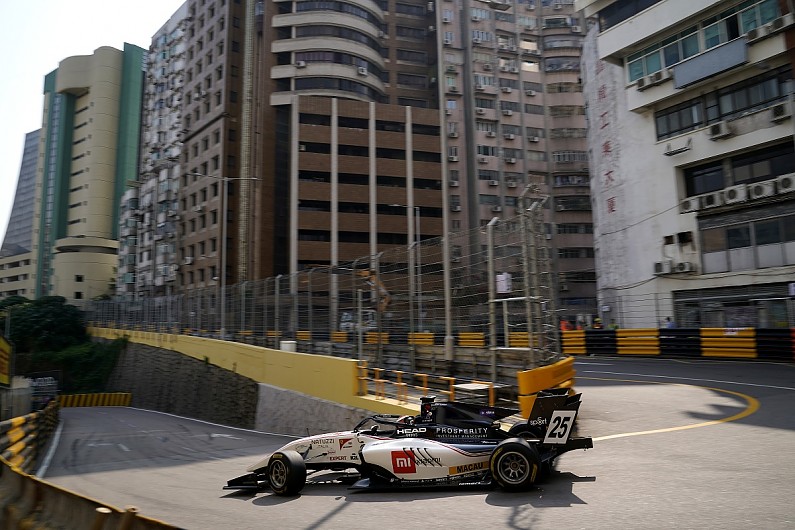 The Ferrari junior had not even driven the FIA F3 car in a simulator before the event.

But he used his experience of four previous Macau GP attempts to immediately get on the pace despite being new to the car, and was sixth in practice before backing it up in Q1.

Behind Vesti and Shwartzman, Renault junior Christian Lundgaard rounded out the top 10 as the first ART Grand Prix driver in the order.

Red Bull and Honda junior Yuki Tsunoda - switching from Jenzer Motorsport to Hitech for this event - had to watch from the sidelines after his car incurred damage in the morning practice session when he crashed at Hospital Bend.

He eventually joined the qualifying session but then crashed again at Maternity, ending the session early and halting Shwartzman's bid to improve for the last time.

Earlier on, Enaam Ahmed of Campos had brought out a red flag with a spin, while Hitech's Max Fewtrell saw red for hitting the wall at Lisboa and Olli Caldwell stopped on the straight after the Fisherman's Bend with an apparent mechanical issue.