Armstrong and fellow front-row starter Leo Pulcini edged away at the start, and with overtaking so difficult at the Hungaroring, both had extra incentive to hold the lead.

The pair pulled away from the pack as Armstrong edged out of DRS range to build a gap, taking between 0.3 and 0.6s for most laps inside the first half of the race.

While Armstrong has already taken a pole this season, he becomes the third of the Prema drivers to take victory and added points for fastest lap, while Pulcini continues his championship resurgence with second.

While Armstrong and Pulcini disappeared, Carlin's Felipe Drugovich - the Brazilian fresh off his first FIA F3 points finish on Saturday - led a train of cars that struggled to get past him in similar fashion to Saturday's race, in which Niko Kari had backed up the pack.

But on lap 14 of 22, championship leader Robert Shwartzman stuck to the outside of Turn 2 and clipped the right-rear of Drugovich, giving the Brazilian a heartbreaking puncture.

Prema's Shwartzman received front wing damage and fell rapidly down the order, eventually retiring for the first time this season.

Second in the championship to Shwartzman, Juri Vips, was the first to pounce by passing the Russian at Turn 2, with Max Fewtrell's ART Grand Prix-run car also following Vips through at Turn 1.

But two laps later, Fewtrell ground to a halt at the exit of the chicane, which allowed Vips to escape. 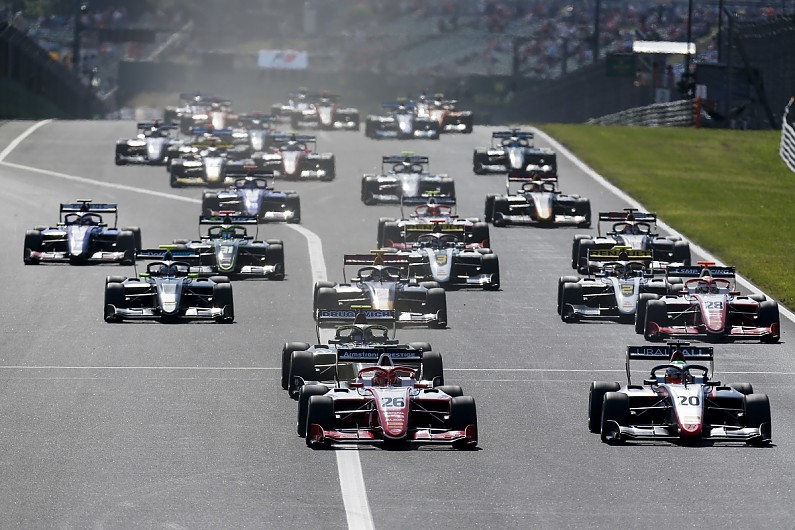 However, just as in Saturday's race, HWA's Jake Hughes erased a huge gap and passed Vips in the final five laps - as he had done for third the day before on the final tour - at Turn 1 to take the final podium spot, and such was his race pace once more that he drove into the distance.

Vips's fourth means the Red Bull junior closes to just 10 points behind Shwartzman after his fourth place in race one.

Saturday winner Christian Lundgaard was rewarded for a patient drive through the field to take fifth - a consolation for ART Grand Prix which lost Fewtrell - and almost caught Vips at the end, while the ever impressive Yuki Tsunoda took seventh.

The Honda and Red Bull-backed junior continues to raise his stock driving for the Jenzer team, in his first season in Europe.

Jehan Daruvala scored points from what has been a nightmare weekend for his championship where he qualified 17th for race one after traffic.

Carlin were given a slight reprieve after Drugovich's bad luck, taking eighth and the final point with American driver Logan Sargeant.

Liam Lawson made it three Red Bull juniors in the top 10 with ninth, ahead of a second HWA entry driven by Bent Viscaal.