The Red Bull junior, winner of last November's Macau Grand Prix, ran in the second group, and after 15 minutes of the 20-minute session he had already bettered first-group-topper Guan Yu Zhou's time by 0.009 seconds.

Ticktum put in another hot lap on the following tour, but narrowly failed to improve - still, it was enough for his Motopark Dallara-Volkswagen to start Saturday's race from pole position.

"The lap was good, it was quick, but there's a little bit more in the high-speed - the next lap I was quicker in the first two corners, but I locked the rears going into Turn 3 [the Pont Oscar left-hander] and then the tyres were gone.

"So I would say there's more to come, although not comfortably more."

Ticktum's lap was never threatened from his group, with a last-lap improvement from Ferdinand Habsburg vaulting the Carlin-run Austrian archduke back up to second, 0.195 seconds adrift.

But Habsburg's brand-new VW engine - with just one day of running on a shakedown - had lunched itself on his in-lap at the end of free practice, meaning he will take a 10-place grid penalty, relegating him to the seventh row of the grid.

Like Habsburg and Shwartzman, Ahmed's best came on his final lap, leaving him just 0.001s behind team leader Palou.

Habsburg's penalty promotes Marino Sato onto the fifth row in his Motopark car. 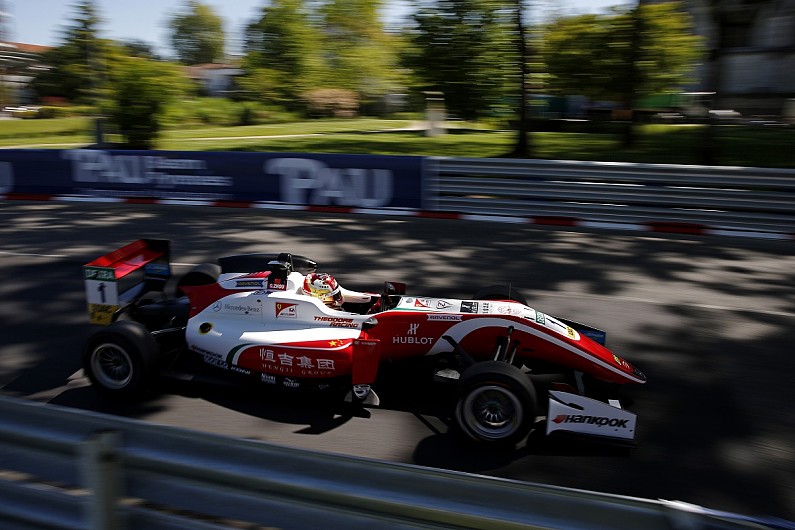 The earlier group featured a much closer fight, with Ferrari protege Zhou demoting Prema team-mate Ralf Aron on the penultimate lap, the Chinese racer defeating the Estonian by 0.039s.

Aron had moved to the fore relatively late in the session, after Carlin racers Jehan Daruvala and Sacha Fenestraz had enjoyed spells at the top of the times.

Fenestraz, who bounced back from brake issues in free practice, ended up on the third row, with Daruvala qualifying on row four.

The third of Prema's Ferrari juniors, Marcus Armstrong, will start from the fifth row.

This group lost free practice topper Mick Schumacher just six minutes in, when he snapped the left-front suspension of his Prema car on the unforgiving Foch chicane kerbs, and helplessly sailed into the wall on the exit.

Schumacher's free practice time remained unbeaten throughout qualifying, but he will start from the ninth row.

Another free practice star in trouble was Juri Vips, who clouted the wall at the exit of Foch in the second group - although he got back to the pits, he could not rejoin and dropped to seventh.