Red Bull junior Juri Vips will remain with the DAMS Formula 2 team for the next round at Sochi and will skip the clashing Okayama Super Formula race.

Vips was drafted into the DAMS line-up for the Spa, Monza and Mugello F2 rounds to replace Sean Gelael, who injured his back in an incident in last month's Barcelona round.

The Estonian driver was unexpectedly available because COVID-19 travel restrictions had prevented him from travelling to Japan for the start of the new Super Formula season at Motegi, where he was supposed to race for Team Mugen.

After failing to pick up any points at Spa or Monza, Vips enjoyed a much more competitive weekend at Mugello, taking seventh in the feature race before going on to claim a maiden rostrum in third place in the sprint race behind Christian Lundgaard and Louis Deletraz.

DAMS has confirmed that Vips will be staying with the team for the Sochi F2 round on 25-27 September, ruling him out of the next Super Formula race at Okayama.

"I'm really happy with the points that the team scored this weekend," said Vips of his Mugello experience. "It wasn't quite perfect, I didn't fully maximise the car's potential as there was the possibility of a podium in the Feature Race and I think we could have won today [in the sprint race] had I made a better start.

"But I'm very thankful to DAMS for this opportunity and glad to repay them with this result. We sorted some of the elementary issues that were present in Spa and Monza while I was still acclimatising, and I was immediately fast in free practice and qualifying, just 0.350 seconds from pole position.

"The pace was there and the car was good, and I'm now really focused on just putting a full weekend together. It's a great pleasure to be continuing in the car for Sochi and I'm hopeful that we can fight for the win." 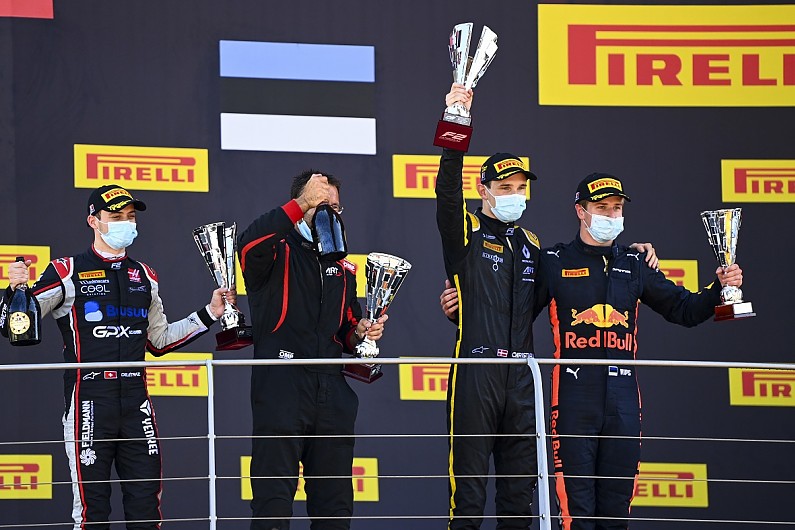 Vips' place at the Mugen Super Formula squad is again expected to be filled at Okayama by Ukyo Sasahara, who made his series debut with the team at Motegi, finishing 11th.

Vips' chances of securing a superlicence needed for a 2021 Formula 1 race seat are receding fast, especially as the Estonian gave up his seat in last weekend's Formula Regional European Championship round at the Red Bull Ring to be present at Mugello.

The 20-year-old added Formula Regional to his 2020 programme as a "back-up" option when it became clear that travel restrictions could endanger his Super Formula commitments, as the two series offer the same number of superlicence points.

Having skipped the most recent round of Formula Regional, Vips now lies 100 points away from the second-place finish he needs in that series to be eligible to race in F1.

Super Formula has implemented a system of dropped scores for 2020, allowing drivers to miss up to two races without harming their title aspirations, but Mugen's lack of competitiveness at Motegi suggests that finishing second in the standings would be a tall order even if Vips is able to contest the rest of the season after Okayama.

The third round of the Super Formula season takes place at Sugo on 18 October.