Matsushita cleared polesitter Nyck de Vries in the final stages of the race to clinch his first F2 victory since 2017, having conserved his rubber to a far greater extent than the current championship leader.

From pole, de Vries fended off Renault junior Anthoine Hubert into the first corner, and pulled a gap as those behind squabbled.

Hubert defended aggressively forcing fellow Renault junior Guan Yu Zhou off the track at Turn 3, and that meant Matsushita was the next challenger for second, a position he took on lap two of 40 at Turn 2.

Before the pit stops for the majority of the frontrunners on lap six, Zhou had made his way past Hubert, but lost out in the stops and then suffered an intermittent gear selection issue a lap later which dropped him down the order.

Zhou's Virtuosi team-mate Luca Ghiotto took up the fight, and after pitting a lap later than his team-mate, jumped Hubert in the pits to secure a podium position behind Matsushita.

In the lap six stops, Matsushita's Carlin squad pulled off a rapid stop to close the gap to de Vries, but the Dutchman eased away, perhaps too quickly.

De Vries reeled in Nikita Mazepin - who led the race after starting on the harder tyre, ruling him of contention - but Matsushita and Ghiotto played themselves into the win battle as they reeled in de Vries at a rate of around 0.4s per lap with 10 laps to go to create a stunning crescendo.

After both had cleared Mazepin, Matsushita eradicated the gap and stole the lead at Turn 1 with five laps to go, followed by Ghiotto at the exit of Turn 4 to take second.

Matsushita was able to build a gap over Ghiotto to move out of DRS range and hold on for his first F2 feature race win, with de Vries the last driver on the podium.

It was still a good race for de Vries in terms of the points standings as the other three drivers in the top four hit issues. 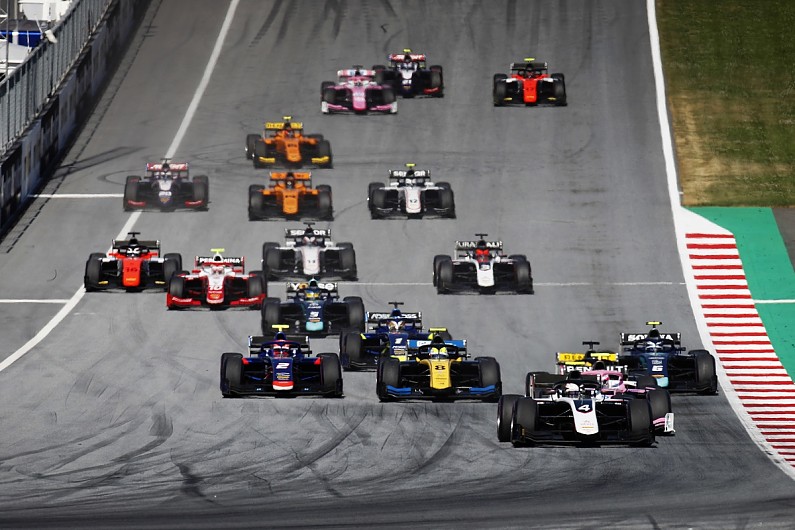 Nicholas Latifi remains second in the points, but was clipped from behind by DAMS team-mate Sergio Sette Camara early in the race and spun while running in the top 10. Latifi came home ninth, as Jack Aitken went off at Turn 1 on the first lap but still managed to recover to 10th.

Hubert struggled to clear traffic as quickly as Ghiotto in the middle of the race, but still moved forward to take fourth in the classification.

Sette Camara set the fastest lap and was stunning in the second half of the race to finish third on the road, passing Hubert and de Vries late on.

But with his Latifi penalty applied, he took fifth ahead of a resurgent Zhou who maintains his top rookie spot in the championship.

Louis Deletraz earned seventh for Carlin, with a penalty for speeding in the pitlane, while Jordan King delivered eighth and the reverse-grid pole for MP Motorsport, ahead of Latifi and Aitken.

Arjun Maini was the top season debutante for Campos Racing in 15th after running the alternative strategy.

But he was disqualified post-race because his tyres were fitted to the wrong side of his car.

That promoted Trident Racing driver and F2 rookie Ryan Tveter to 15th in his first race for seven months.

Ferrari junior and Prema driver Mick Schumacher showed great pace during the race, but at the start of the formation lap he said "nothing works" as he remained stranded on the grid and had to start from the pits.

His only silver lining was that he beat Red Bull junior Patricio O'Ward despite starting from the pits, the latter seemingly struggling with the Pirelli tyres on debut.