Sean Gelael jumped to an early lead for Prema Racing from third on the grid, and survived a restart after a safety car caused by Tatiana Calderon locking up and taking out Ralph Boschung and Louis Deletraz.

But Geleael lasted only six laps in the lead as he suffered with a brake issue that meant his car was locking at the rear, costing him massively in the heavy braking zones at Turn 1 and 2.

He pulled out a five second gap while others squabbled behind, but then Ferrari junior Giuliano Alesi crashed attempting to pass Renault's Guan Yu Zhou, bringing out another safety car on lap 10 of 19.

At the restart, Sauber Junior Team driver Correa locked up, while Renault F1 junior Jack Aitken launched an attack on Latifi, but had to bail out.

Correa held onto second and Aitken attacked at Turn 2 but Correa pushed Aitken wide, and Aitken all but stopped mid-corner.

That caught out Luca Ghiotto in fourth, who crashed into the wall and Nikita Mazepin and Jordan King also followed into the barriers.

Aitken's poor run off the corner gifted de Vries third and then the safety car came out again, for the Ghiotto crash.

That led to a two-lap shootout because the race ran to its 45 minute time limit, and Latifi got a fantastic restart to secure victory, his second of the season which cements his points' lead. 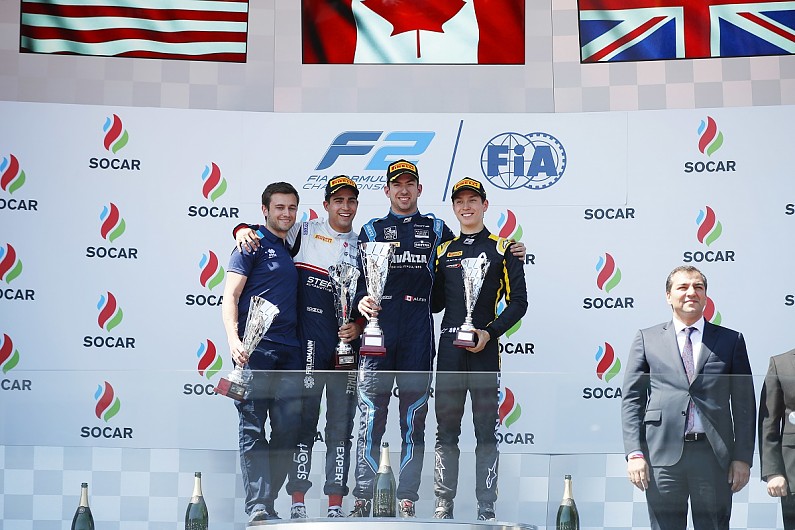 Behind, Correa held on for a spectacular second, in his second race on a proper street circuit, no doubt impressing his affiliated Alfa Romeo team.

"Champagne, baby," he shouted on the radio at the finish.

Campos Racing's Aitken - who had begged the marshals to hurry to clear the Ghiotto incident so the race could get back underway - stole the podium spot back at Turn 1 on the last lap from de Vries to pair with his win on Saturday.

Schumacher took fifth on the last lap, diving up the inside of his Prema team-mate Gelael for his best F2 result so far.

He had spun at Turn 16 in yesterdays feature race while running in the top seven and said he wanted to "save" his weekend after that "costly" shunt.

Sergio Sette Camara of DAMS - taken out in the feature race - and Aitken's Campos team-mate Dorian Boccolacci passed the luckless Gelael on the last lap also.

Gelael did well to hold on for eighth through the old town roads of Baku, to secure a point despite his brake issues.