Images of the MRT07 that emerged last week give a glimpse into what to expect from F1 2017 and the new regulations.

Manor's two chassis had been constructed and were positioned in their respective race bays at the factory but little else was ready - the diminishing cashflow having meant supplier payments were on hold.

The chassis' rear indicates that Manor had decided to run a liquid-air cooler sandwiched between the fuel cell and front face of the engine, following Mercedes' 2014-16 practice.

It is also understood it had decided to move some of the electronics from within the sidepods to this crevice in order to maximise aerodynamic performance from the car's flanks.

The deltoid shaping of the front wing is a requirement of the new regulations, with the addition of a wedge shape forming the leading edge of the neutral centre section.

The wide shallow nose has been set as far back over the neutral section as possible, rather than perched out over it like its predecessor.

The position of the nose tip has been a focus for teams since the neutral section was introduced in 2009.

Its proximity and shape changes how the neutral section behaves, using it to generate downforce and improve performance downstream.

The front wing has been subject to numerous changes, taking into account the increased width and the tyre.

A more aggressive outwash tunnel is complemented by numerous upper elements, with an outward turning 'r' cascade sat slightly inboard of a three-element open-ended cascade, with lower surfaces curved to match those of the flaps below.

This is a design feature used by both Williams and Caterham on the FW36 and CT05 respectively, and has likely been revived by a need to break up airflow across the face of the wider tyre and push it out around it.

The outwardly curved endplate is also furnished with an upwash canard, assisting in this redirection of airflow around the tyre and improving the shape of the wake shed by the tyre.

The main plane is separated into two main elements and supplemented by additional slots above the curvature of the outwash tunnel.

The upper flaps have been redesigned, their tips meeting as the lower of the two is upturned to meet the other. 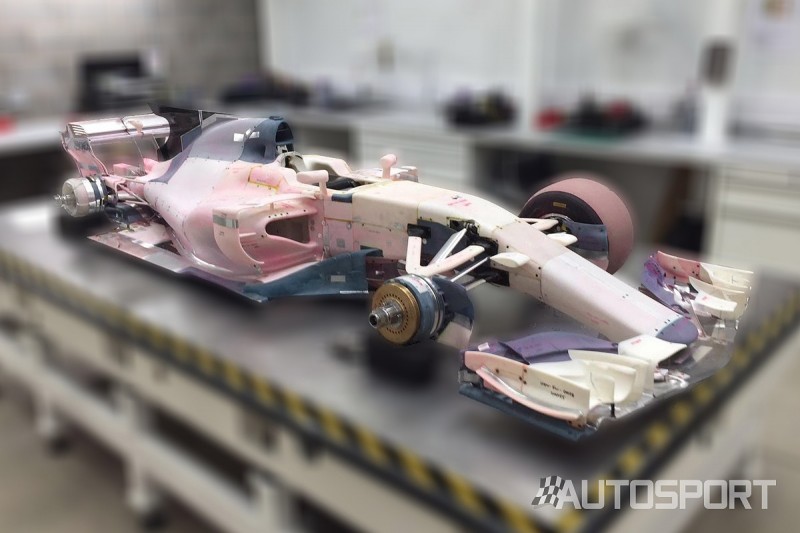 There will likely be moves to employ more complex structural designs to improve aerodynamic impact.

The delta shape of the sidepod has expanded the role of the bargeboards for 2017.

The Manor windtunnel model's examples wrap around the sidepod's front face and meet with an extended axe head section on the corner of the floor.

Their forward most section draws alongside the car's splitter, and the serrations help to improve efficiency while the leading serration curves over to form both a support and a horizontal aero surface.

The sidepods have grown in width to suit the car's overall girth and allow the team to play around with the orientation of the radiators and intercoolers to improve internal airflow efficiency.

They are still flanked by an upper leading edge slat, stretching from the cockpit and mounted astride a single vortex generator, before curving around the sidepod's shoulder and finishing several inches above the floor, in a similar fashion to the appendages used circa 2005-08.

The slat and conditioner sit further away from the sidepod's surface compared to recent years' trends.

Having reached their maximum width at the front, the sidepods swiftly taper around the internal structures toward the cooling outlets, which are raised to improve the undercut and expose the floor.

The tyre squirt deck ahead of the rear tyre has two large L-shaped cut-outs, in order to shape the airflow as it is pushed laterally off the tyre into the diffuser, which starts 175mm ahead of the rear wheel centre line rather than on it like its predecessor. 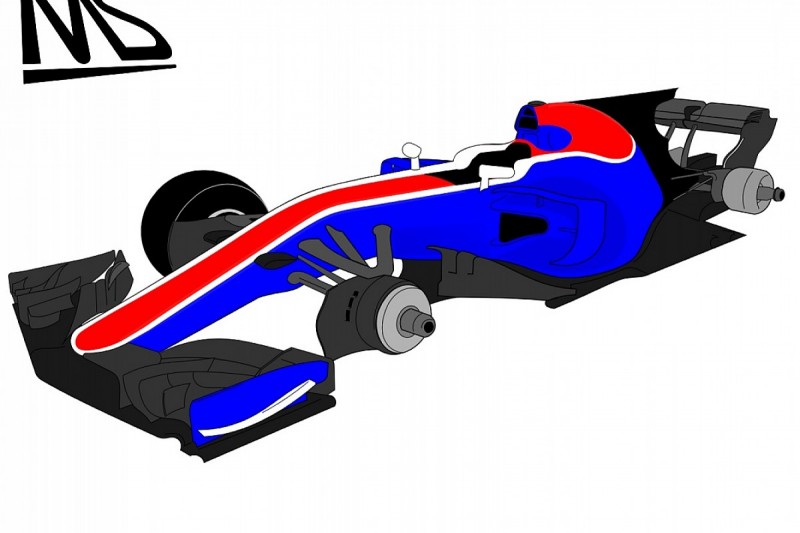 Toward the rear of the car, the 'shark fins' have returned.

The shorter, slanted wings of 2017 will protect the rear wing from turbulent airflow generated upstream that could be problematic to the lower assembly.

The open-ended louvres pioneered by Toro Rosso and used by several teams last season to displace the vortex generated at the wings tips are also present.

With Manor's difficult financial position clear in early January, the team had begun work an interim solution that required modifying the 2016 car to be designated the MRT05B.

It is understood the changes included a revised underbelly and wing pillars for the nose, a revised splitter and plank installation, bargeboards, sidepod upper covers, a new floor, rear wing and revisions to the height of the diffuser.

Manor's planned MRT07 may well have been the car with the fewest details but it does show how complex aero development is likely to be in 2017.

Esteban Gutierrez admits he was 'too confident' over Haas F1 seat

What Ross Brawn needs to do to fix F1