The duo collided at Portier near the end of the race when Button moved down the inside of Wehrlein, touching his right rear wheel and sending him into the wall.

Wehrlein's car flipped onto its side and ended up against the barriers, with the safety car being called so he could be retrieved from the car.

Wehrlein's helmet made contact with the barrier and the German said he will need to have a scan next week to make sure everything is fine following the back injury that led to him missing the first two races of the season.

"He was nowhere, clearly this corner is no place to overtake. It was a silly move," Wehrlein said.

"I touched again the head on the barrier, so I will have to do another scan next week for my back.

"I could jump out myself, so it seems to be OK. Obviously with the injury I had, I'm not too sure.

"I remember everything [of the crash], it was just scary.

Button said he realised too late that Wehrlein had not seen him. 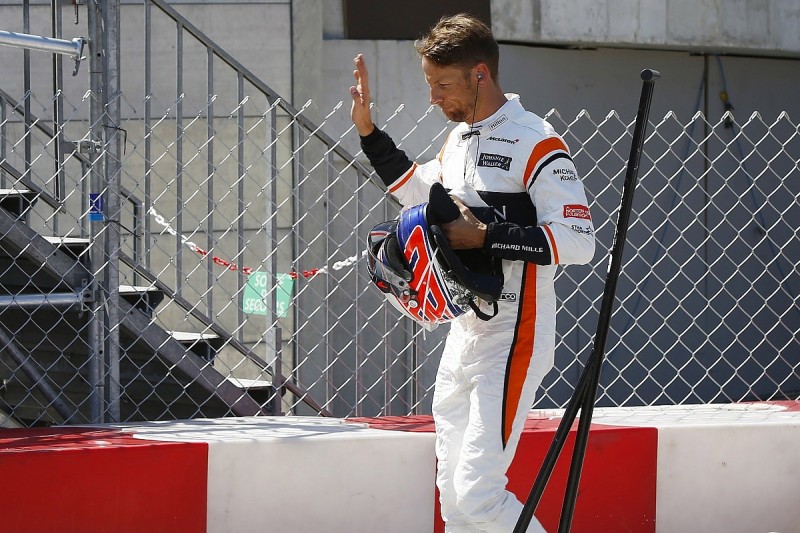 "Obviously I thought it was on because [otherwise] I wouldn't have made the move," he said.

"His tyres were completely gone as he came in on lap one - I thought I was well up the inside.

"As a racing driver it's difficult to just drive around and not have a go, so I had a go.

"I got alongside him, then I looked across and was like, 'he hasn't seen me at all'.

"These cars are so difficult to see out the back of, I've been telling the team and the FIA that this weekend.

"I tried to back out of it, but it was too late and we touched."

The Briton, in his one-off return to F1 to replace Fernando Alonso, admitted it was "horrible" to see Wehrlein's car stuck against the wall.

"I've never seen a car go up on its side before, I don't know if that's the way the tyre is or just unlucky, I don't know," he added.

"I asked as soon as I stopped the car and they said he got out on his own, which is good.

"I saw him earlier, he obviously wasn't happy but he seemed OK anyway."

Sebastian Vettel has denied Ferrari had team orders in Monaco

Button gets grid penalty he may never serve for Monaco collision