Vettel said Ferrari first became aware of the system when onboard images from Lewis Hamilton's car on Thursday morning showed the world champion moving the steering wheel back and forth between corners and straights, after which the front wheels moved.

The four-time world champion, who drove Ferrari's SF1000 for the first time in testing on Thursday after he was removed from the Wednesday line-up due to sickness, questioned how much lap time the innovation might be worth.

"I've seen it and we talked about it at lunch," said Vettel. "It obviously looks interesting.

"I guess the fact that they're running with it means it's legal.

"I don't know if it works. I guess there's quite a lot of work to bring it to the track and it's probably not as easy as it looks for the driver to to work with it.

"We will see, but it was a novelty for us to see." 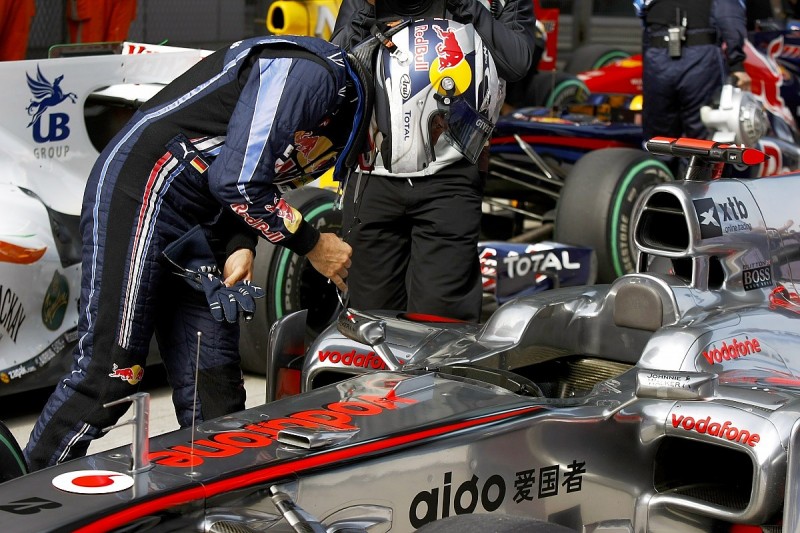 Vettel compared the system with the F-duct solution pioneered by McLaren, which required drivers to use their hands or knees to block holes in the cockpit area for an aerodynamic benefit.

"I think it's quite weird, when you have the feeling all of a sudden, you might have the wheel in your hand," he said.

"I could just imagine it feels weird. But if it's faster and there's no concern you go for the faster option.

"We had the F-duct many years ago, and we drove around with one hand most of the tracks.

"That wasn't safe, but it was fast.

"So you do what you're pushed to do, but then that's why we have the FIA obviously, to look after us and make sure things make sense, and we have got our hands on the wheel."

Elaborating on that comment, he said: "Imagine you're used to running and you put on your running shoes, and then somebody asks you to run with your flip-flops.

"You can also do that, but it just feels very different.

"It's not quite that extreme, but it's just that you add something that's completely new and feels probably strange and weird at first, but obviously if it gives you an advantage, gives you an edge, you can fulfil the task, and you have the capacity to do it and with enough practice, then why not?"

Vettel downplayed the suggestion the DAS could give Mercedes a decisive advantage.

"I think it's much more dependent on what you have around it," he said.

"Maybe I'm underestimating, but I don't think that this is the ticket to win.

"I think there's a lot more elements to building up a competitive car, but for sure it's an innovation, and we will see whether it's something that everyone has to pick up on or not."