The Ferrari driver posted a 1m05.092s, a new fastest lap of the 2.68-mile version of the Red Bull Ring circuit, on ultra-soft tyres to edge out Hamilton by 0.269 seconds.

Hamilton was unable to respond after he appeared to suffer a brake disc failure in the closing stages.

The second Mercedes of Valtteri Bottas was third quickest, 0.423s adrift, with Ferrari's Kimi Raikkonen a tenth further back in fourth.

Bottas then pumped in a 1m05.726s to go fastest, only for Vettel to usurp him by three-and-a-half tenths with a 1m05.726s just before the halfway mark.

Attention then turned to qualifying simulations, with Hamilton the first to head out with a fresh set of ultra-softs - the softest Pirelli tyre in use this weekend.

Hamilton, who topped both of Friday's practice sessions but has a five-place grid penalty for a gearbox change, went quickest with a 1m05.361s.

Vettel slotted into second with his first attempt, 0.023s adrift, but looked set to go quickest after setting the fastest two sector times.

But he caught traffic in the form of Hamilton in the final sector and backed out of the lap, before regrouping to record the session-best time on his next flying effort. 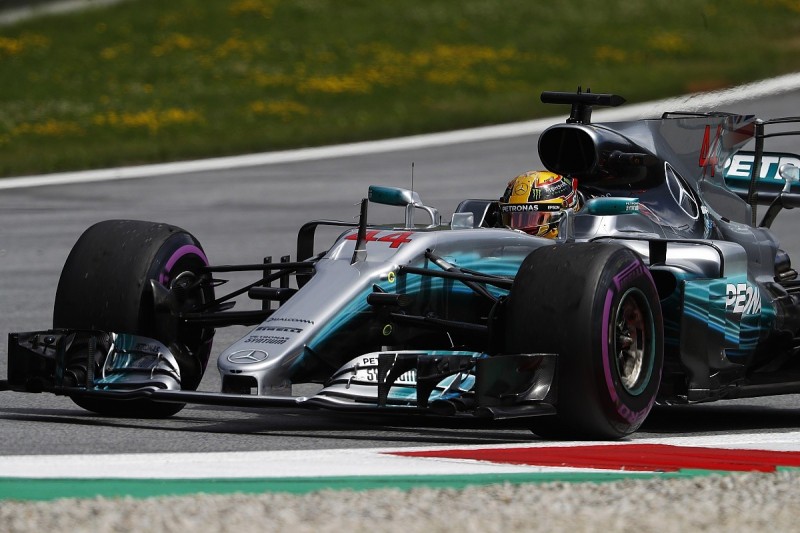 There was late drama for Hamilton when he locked up and went off track at the top of the steep ascent to Turn 3.

Replays showed him appearing to hit the brakes normally on the approach to the corner, leading to a big puff of smoke from the front-right wheel before he headed straight on.

Having avoided the gravel trap, Hamilton recovered to the pits gingerly, with Mercedes detecting a brake problem that ended his session early.

Verstappen beat Red Bull team-mate Daniel Ricciardo to the fifth-fastest time by a tenth of a second, with Haas's Kevin Magnussen best of the rest in seventh.

His team-mate Romain Grosjean was eighth, with the Toro Rossos of Daniil Kvyat and Carlos Sainz Jr completing the top 10.

Sainz had a frustrating start to his session when he stopped out on track just a few moments after leaving the pits, citing an engine problem.

The marshals recovered the car to the pits and the team managed to get him going again, with just under half the session to go.

Stoffel Vandoorne was the leading McLaren in 13th, a fraction ahead of team-mate Fernando Alonso in 15th.

Alonso has reverted to the 'spec 2' Honda engine for the remainder of the weekend after Honda found a problem on the latest spec unit.