Max Verstappen says switching to slicks late in 2022 Formula 1 Canadian Grand Prix qualifying was “never on” for Red Bull, viewing it as too much of a gamble.

Verstappen claimed pole for F1’s first race in Montreal since 2019, as he topped all three segments of a wet-but-drying qualifying session at the Circuit Gilles Villeneuve, while his title rivals Sergio Perez and Charles Leclerc qualified down the order – the former due to a crash and the latter because he did not need to risk an incident given his pre-qualifying engine change meant a back row start in any case.

The field ran full wets throughout Q1, but several drivers headed straight out on intermediates in Q2 – with most staying on the green-walled rubber for the rest of the session even as a clear dry line appeared with rain stopping and the cars clearing water away, particularly towards the end of the Montreal course.

Mercedes driver George Russell did switch to soft slicks ahead of the final runs in Q3, whereas the rest of his rivals in that segment took new inters.

The move backfired for the Briton as he went off at the second corner, where a large puddle of standing water at the slowly-draining apex meant he had to steer wider to the left on the still damp section of track and ended up spinning and sliding backwards into the barriers.

“It was just too wet in some places,” Verstappen said of Red Bull’s consideration for getting off the inters.

“Of course, it was only like 2.5-seconds [away from the predicted crossover lap time], but you cannot take that gamble in qualifying. So, for me it was never on.

“But the other places on the track it was quite dry, so also to manage your inter over a lap was quite a handful." 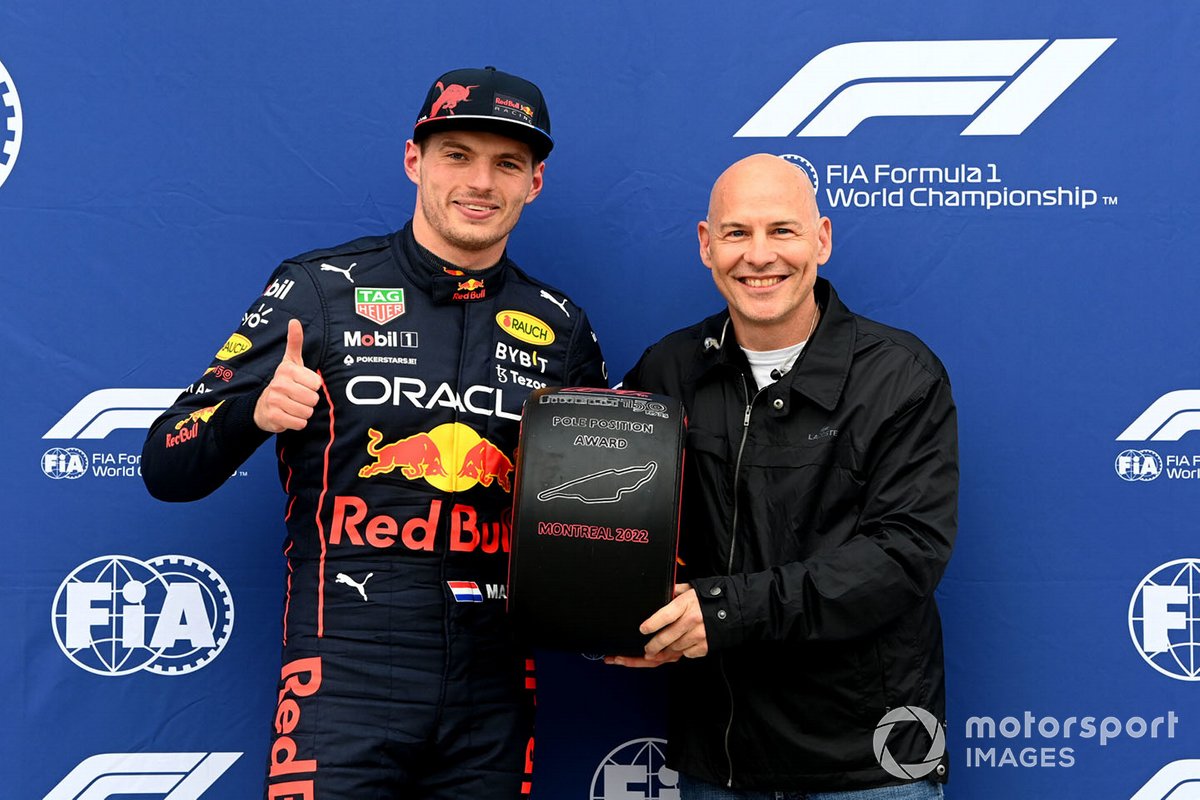 When asked by Autosport how he had driven to keep his inters hot enough to provide good grip through the still-wet opening corners but then not wear them out around the dry latter section late in the final qualifying segment, Verstappen replied: “That was mainly in Q3 just because the track was dry in some places and I felt like actually on the first lap the tyres were in the best condition.

“But, of course, the track keeps on drying, so that’s why on the second lap you improve.

Saturday’s FP3, where he spun off late-on, and qualifying sessions marked the first time Verstappen had driven in the wet in Montreal, but the world champion said just getting the wet weather tyres to work at their best was more important than discovering the grippiest different lines in such conditions.

“Always the first time [driving a track in the wet] you try a few different things where you think the grip is,” he explained.

“And especially also trying to get the tyres to work was the most important thing, not even the line.

“As soon as it started to dry out, then the tyres started to work finally a little bit and it was fun to drive.”