Verstappen: Senna and Prost would approve of my defensive driving

Kimi Raikkonen said the Red Bull driver's defence of fifth position at the Hungaroring last Sunday was "not correct", while Sergio Perez plans to bring the matter up in the drivers' briefing at this weekend's German Grand Prix for further discussion.

But Verstappen described the matter as "pretty clear" and not "dramatic".

"There was nothing said by the stewards so I don't think I did anything wrong," said Verstappen at Hockenheim on Thursday.

"You are fighting - we are not on a Sunday drive.

"That's how I approach it, we are here to fight and there to score points.

"Senna and Prost would have liked it as well.

"We are fighting in the championship with Ferrari so it's not like you open the door and let him go - he didn't do that for me after my first pitstop."

Verstappen cited his behaviour when stuck behind Raikkonen despite having fresher tyres earlier in the race as an example that the chasing driver is also responsible for racing sensibly.

"I don't think it's that dramatic - you know it's hard to overtake on that track," he said.

"You could see after my first stop I was behind Kimi on new tyres and I couldn't get past, but I didn't start to do crazy things.

"I didn't get too optimistic in the braking zones trying to pass because there is no way to get past.

"What I did [when defending] in Budapest is just a racer's instinct.

"There was no front wing or anything next to my car. It was all pretty clear."

Max Verstappen is taking some heat for the way he defended position from Kimi Raikkonen in the Hungarian Grand Prix, despite officials deciding he did nothing wrong.

Raikkonen alleged Verstappen moved "right and then left when I was going there" after breaking his Ferrari's front wing on the back of the Red Bull at Turn 2 at the Hungaroring.

Ferrari went ballistic at the FIA as Raikkonen complained again after locking up and nearly hitting Verstappen a second time at Turn 1.

I've watched these incidents back countless times and find it difficult to agree totally with the argument that Verstappen was completely out of order.

The first incident (at Turn 2) is complicated by Raikkonen's own hesitation. He moves outside, inside then outside again, while Verstappen hovers in the middle of the track then moves to cover the inside.

Granted it's a late move from Verstappen, but there's less chance of contact if Raikkonen is more decisive initially.

In the second incident (approaching Turn 1) Verstappen again jinks towards the inside at late notice, but there's still plenty of space for Raikkonen to go into if he chooses.

But Raikkonen second-guesses again, switches to the outside, locks his brakes and goes wide. He also comes from further back on this occasion.

At no point does Verstappen try to force Raikkonen off the track, but he is clearly trying to 'spook' Raikkonen out of making his move. And it works.

The Ferrari driver pays for not being incisive enough and making his initial move too early, rather than waiting in the slipstream.

The rules state that drivers are not allowed to change line more than once while defending position, and must leave at least a car's width to the edge of the circuit when coming back onto the racing line as part of that move, or if any part of the other car is alongside.

In both cases Raikkonen was never alongside the Red Bull, and it also looked as though there was enough space for Raikkonen to drive into.

But he chose not to. Had he arrived into that space and found it insufficient then Verstappen would surely have been penalised for overcrowding (if Raikkonen ended up off the circuit), or for causing a collision should one have occurred.

You can't criticise a driver for moving more than once when he didn't, and you also can't criticise him for reacting to what the car behind is doing. That's how defending works.

But you could debate the timing of Verstappen's moves, as he jinks towards the inside quite late on both occasions.

Jenson Button argues Verstappen's defending was dangerous for just this reason, because he waited until the braking zones.

But the rules also forbid erratic driving, and any driving that may be deemed "potentially dangerous", so if Verstappen did this he should have been penalised.

From the looks of things he moves fractionally before the braking zone approaching Turn 1, shifting line slightly, then braking hard, then making for the apex.

It looks to me as though Verstappen has driven to the very edge of what is permitted under the regulations.

He hasn't changed line in defence more than once, and he hasn't crowded the other car off the circuit.

But Raikkonen could legitimately argue that Verstappen's late 'jinking' constitutes a breach of Article 27.8, which outlaws "any other abnormal change of direction".

Perhaps this is what the drivers will discuss with Charlie Whiting in the German GP drivers' briefing on Friday.

I would still argue Raikkonen paid a price for showing too much uncertainty in battle, but equally there is probably a case to be made for clarifying exactly what constitutes 'abnormal' or 'erratic' behaviour behind the wheel.

When it comes to wheel-to-wheel racing it's important everyone knows exactly what's acceptable and what is not. 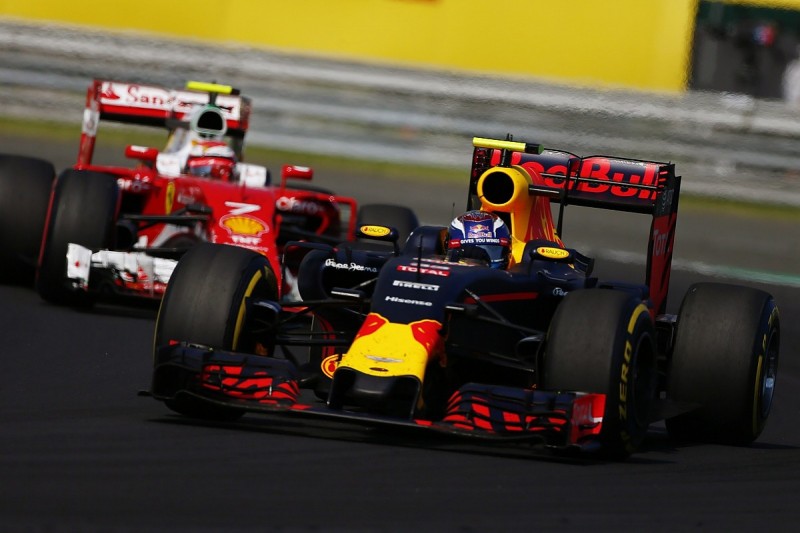