Verstappen lost the rear of his car exiting the Luffield right-hander on his first lap in FP2, with the Red Bull snapping off left and hitting the outside wall with its right-rear corner.

That resulted in a red flag period to allow for the car to be recovered, and meant team-mate Daniel Ricciardo had to shoulder the team's Friday long run work.

"I wanted to be too quick on the hard tyre, so I lost it," explained Verstappen, who earlier lost the final part of FP1 to a gearbox problem. "Unfortunately the way you then hit the wall, it rips off the right rear.

"It's not ideal to lose the second session, but the feeling I had before that was actually quite good.

"I think balance-wise we are not too far off, we are just losing a lot of lap time on the straight."

Verstappen insisted he would have time on Saturday morning to bank some long runs.

"We'll try that [long runs] tomorrow, FP3 is still long enough to get that in, so I'll get some information from that, and anyway I have Daniel's data," he said. "I should be alright.

"I feel good always around this track. Of course it's better to drive a lot, but I feel confident already in FP1 with the harder tyres, I think the pace was good.

"It seems like we're definitely not fighting for pole, but we'll try again tomorrow. At least I have two sets of softs, that's positive." 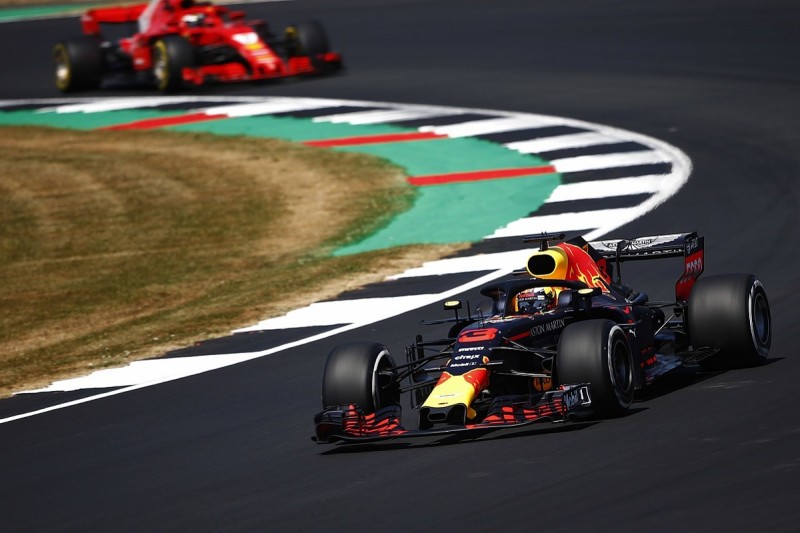 "We are a bit off the pace at the moment," said the Australian.

"Ferrari and Mercedes are strong and hopefully that is not the same for the whole weekend, we are going to try to find a bit of speed for tomorrow and Sunday.

"We just need to manage everything - the temperatures - that'll be key to have a better car on Sunday. Ferrari and Mercedes are too fast on one lap, but for the race we'll try to find one or two little secrets."

Ricciardo pinpointed the team's lack of straightline speed as a handicap.

"We certainly lose a fair bit," he said. "We see on the overlays, some corners we are able to gain a little bit but we lose a bit of that and more [on the straights]. We will do what we can.

"At the moment we seem we seem like we are not on their pace, that is the fact.

"We try to find something that puts us there tomorrow, keeping the tyres in the right condition in these uncharacteristic [warm] conditions at Silverstone is key.

"If we can get on top of that, maybe the longer runs, then maybe things will come to us."