Vettel's team-mate Kimi Raikkonen topped the early stages of the session with a lap of 1m28.591s using the medium-compound Pirellis.

That was before Verstappen's session came to an end on only his first flying lap of the session.

The rear of his Red Bull broke away exiting the long, slow Luffield right-hander and, in correcting it, the car snapped the other way and spun to the left.

Verstappen hit the wall with his right-rear corner, so was unable to participate in the rest of the session and ended up classified 19th ahead only of Romain Grosjean, who did not run thanks to a monocoque change caused by his FP1 crash. 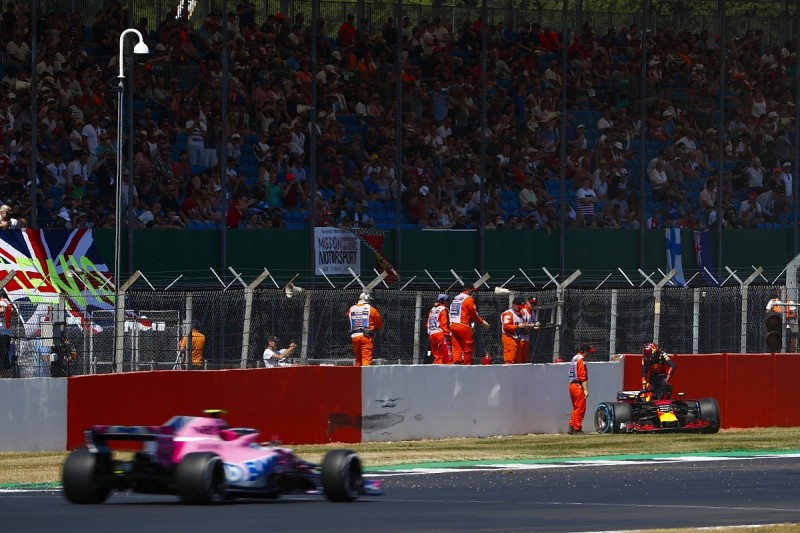 After the restart following a nine-minute red flag, Hamilton slotted into second place on medium tyres with a lap of 1m28.676s completed 36 minutes into the 90-minute session.

By that time, Raikkonen had already bolted on softs and was gearing up for his performance run, posting first a 1m28.525s and, on his second quick lap, a 1m28.045s to consolidate top spot.

Vettel then banged in his quick lap, a 1m27.552s to go fastest - half-a-second quicker than Raikkonen.

Valtteri Bottas was the first of the Mercedes drivers to set a time on soft rubber, setting a 1m27.909s just after the halfway point of the session.

Lewis Hamilton did not set his best time on softs until his sixth lap on the tyre, posting a 1m27.739s to secure second - 0.187s behind Vettel.

Raikkonen was shuffled back to fourth by this, ending up ahead of the only Red Bull to post a time - Daniel Ricciardo, who was 0.856s off the pace.

Renault's Nico Hulkenberg was seventh, half-a-tenth behind Alonso and ahead of Force India duo Esteban Ocon and Sergio Perez.

Charles Leclerc rounded out the top 10, just 0.006s ahead of Renault driver Carlos Sainz Jr - the Sauber driver surviving a spin onto the grass exiting the Brooklands left-hander with 12 minutes remaining.

Pierre Gasly ended the session early with what he said over the radio was a power unit problem, pulling off at The Loop that leads onto the Wellington Straight just before the one-hour mark.

By that time, he had set one quick lap on softs and slotted into 13th between the Haas of Kevin Magnussen and Marcus Ericsson's Sauber.

Williams pairing Lance Stroll and Sergey Sirotkin were 15th and 16th, ahead of the McLaren of Stoffel Vandoorne and Brendon Hartley's Toro Rosso.