Mercedes ran a new floor design at Formula 1's United States Grand Prix, and then swiftly followed this up with some experimental trials in Mexico.

These were fitted to test driver Nyck de Vries' W13 as he completed duties in FP1 as part of each teams' requirement to run a young driver.

With Mercedes now having got on top of understanding the key weaknesses of the W13, it is using this stage of the season to conduct some experiments that can help it plot its best path for next year's challenger.

As a result of its push, the new floor, pictured above, features several optimisations. This includes the geometry of the fences that guard the entrance to the venturi tunnels and the inclusion of a vertical baffle on the forward section of the edge wing, which connects the two sections and prevents the edge wing from moving too much under load (red arrow).

Meanwhile, the scrolled forward section of the edge wing was not only more generously rolled over in the update, because the strike that helps encourage flow direction was also moved and reoriented.

The floor run on De Vries' car didn't feature the design aspects of the new race floor around the edge wing (white arrows, above).

Instead, these appear to be more of an answer to Mercedes' current configuration, with the team focused on the design of the floor and fences upstream. This will in turn have an impact on the performance envelope of the floor and diffuser downstream.

While the underside of the floor is not visible, the outward experiments include a change in profile for the floor and outer floor strake, with the surface more inwardly pinched and the ramp shape altered.

Interestingly this follows a general pattern seen in the back half of the season, with numerous teams, including Alpine and Alfa Romeo, opting to pinch in this section and alter the allowable volume on the underside by raising the ramp externally. 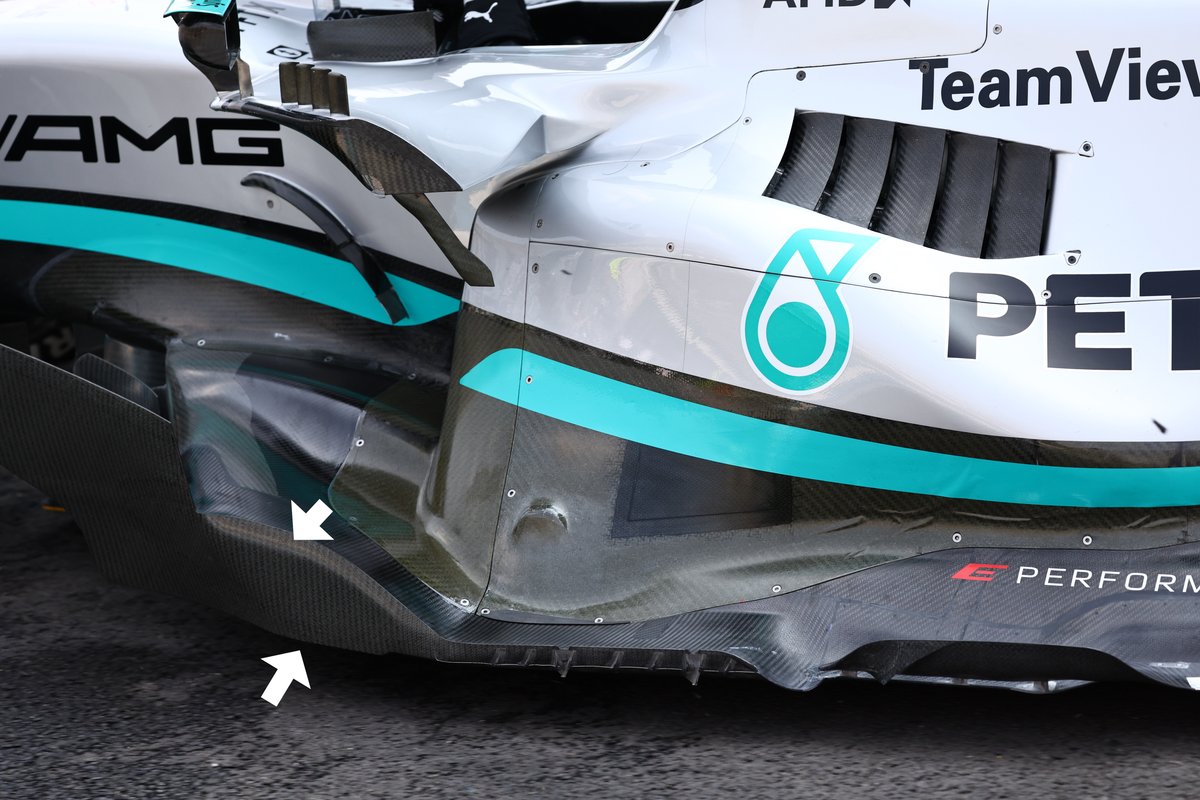 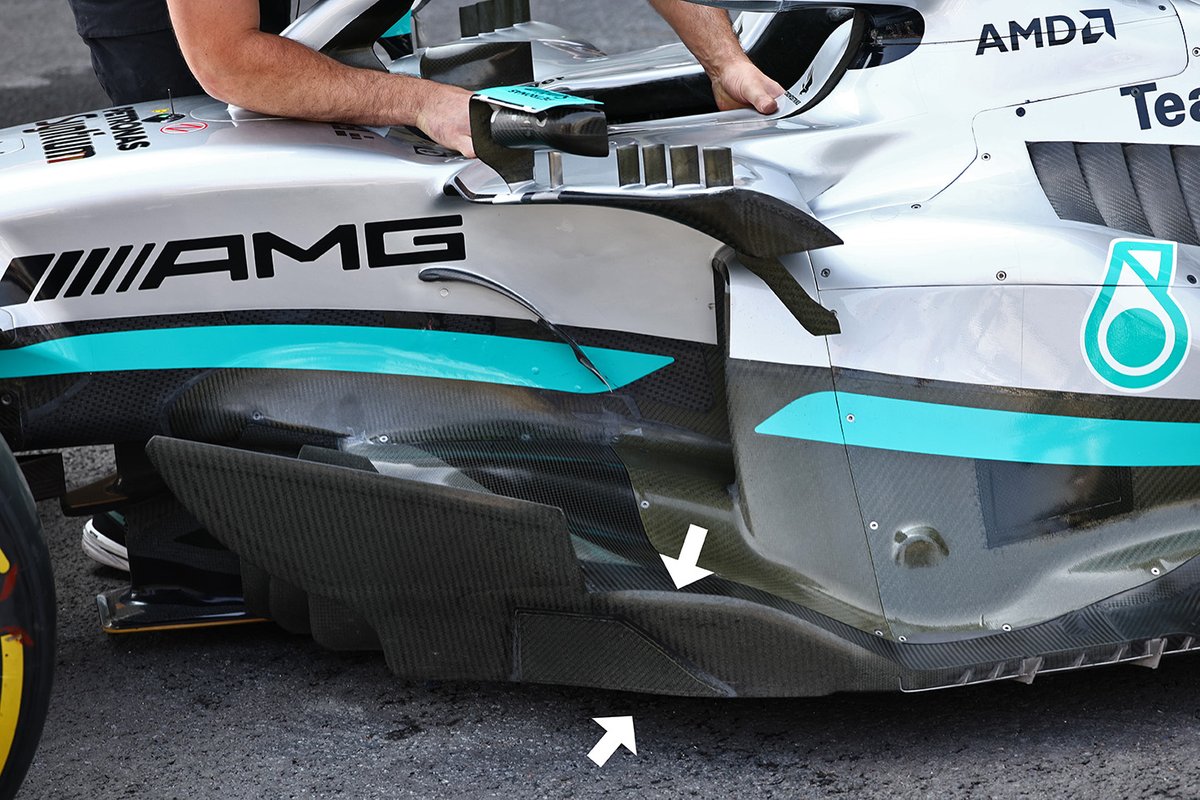 The floor wasn't the only experiment being conducted by Mercedes either, as the team ran both its cars in different aerodynamic configurations during Friday's free practice sessions in Mexico.

George Russell's W13 was fitted with its high downforce rear wing complete with Gurney flap on the trailing edge, plus the newer specification front wing that had first appeared at the United States Grand Prix, minus the controversial slot gap separator brackets. 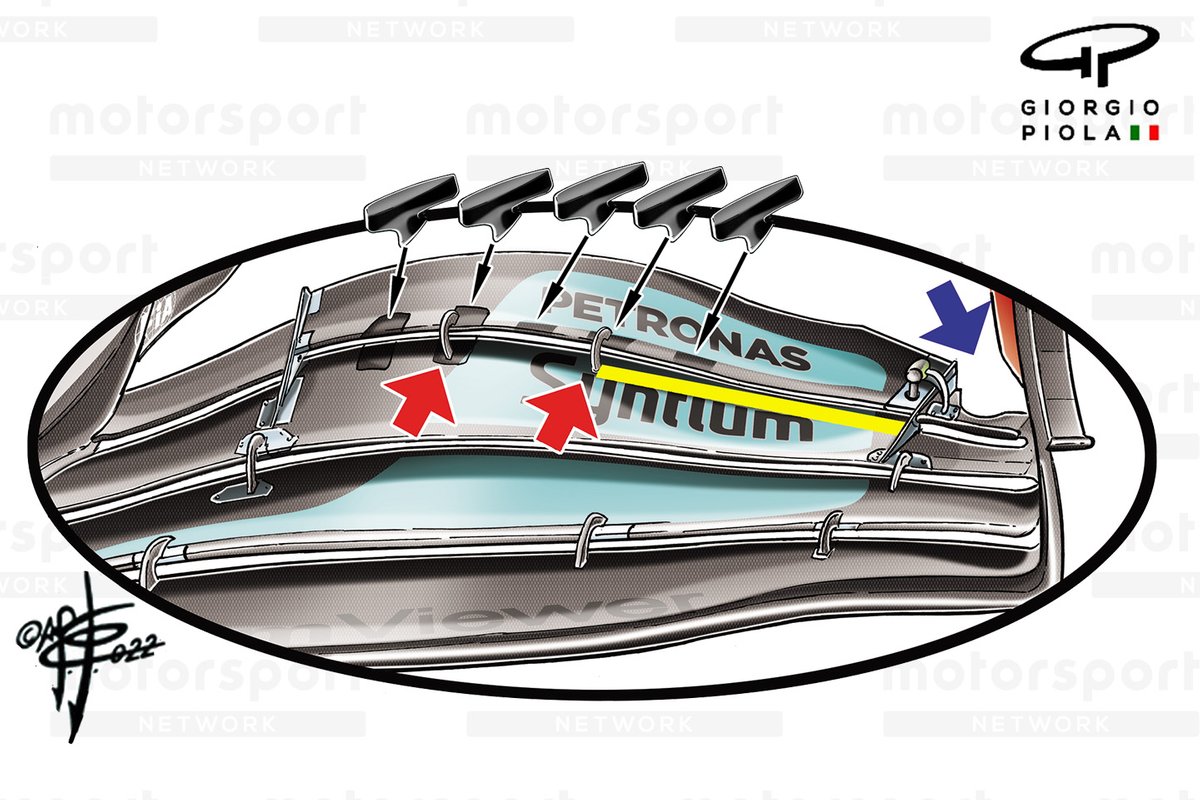 The slot gap separators had been considered to be doing too much heavy lifting from an aerodynamic perspective, with the governing body and the team's rivals concerned this was their primary function, rather than being there to offer support to the two elements they were connected to.

Mercedes had removed the separators but retained the new flap and endplate design, which also aims to increase the level of outwash that can be generated.

On the other side of the garage, the rear wing didn't feature a Gurney on the trailing edge and there were several versions of the old front wing put into action, all with varying degrees of the upper flaps trailing edge cut back.

As the team had gathered the data it required on Friday, it set up both cars with the newer specification front wing and with the Gurney deployed on the trailing edge of the rear wing for qualifying and the race. 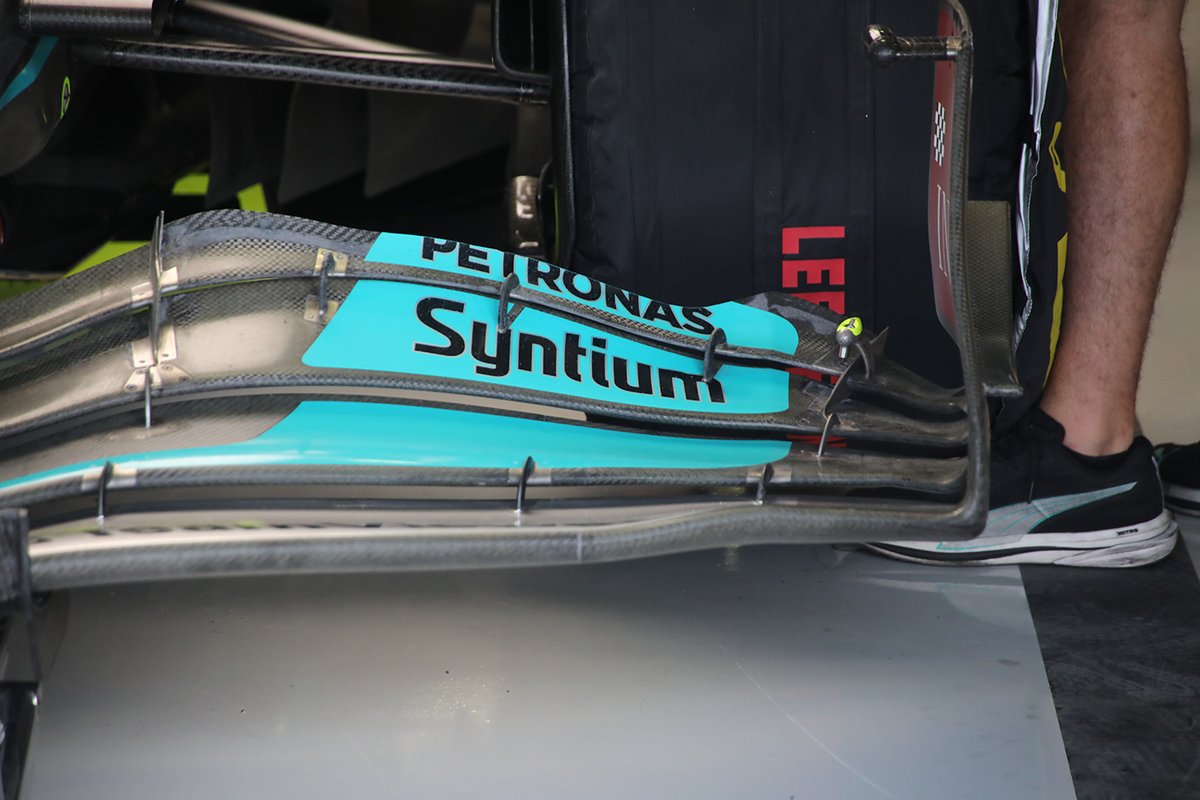