Formula 1 teams will use the British and Austrian GP weekends to prepare for an FIA clampdown on porpoising and grounding that will be implemented at the French GP.

From the Paul Ricard event, the FIA will be measuring what it officially calls aerodynamic oscillations – and cars that do not comply within its limits will potentially face exclusion from races.

At the heart of the FIA's clampdown is a metric in the form of a complex equation that looks like something  discovered by Stephen Hawking or Albert Einstein, and which teams will now have to understand and comply with.

The porpoising clampdown was first signalled in a technical directive issued by FIA single-seater technical boss Nikolas Tombazis on the eve of the Canadian GP, amid some controversy about the timing.

An updated version was issued to teams in draft form on Thursday, and it was missing any reference to the extra floor stays that became such a contentious issue in Canada.

The significance of it being a draft version is that Tombazis remains open to receiving feedback from the teams by 12th July – but he stresses the substance of it is unlikely to change, and thus teams have to prepare for it to come into force for the French GP. 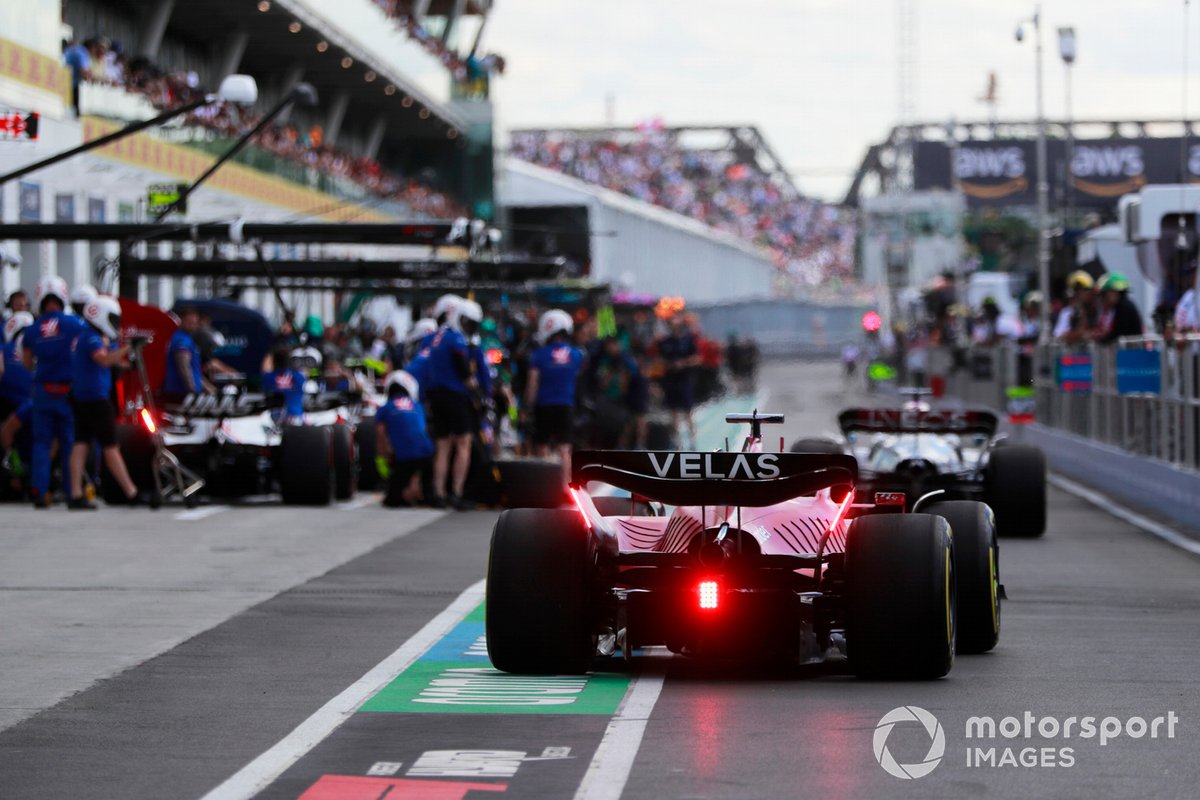 In the TD, Tombazis reiterated what he said in the earlier version, that safety is the key consideration of the exercise and that allows the FIA to introduce rule changes.

"It has become increasingly apparent from driver comments that excessive aerodynamic oscillations and car grounding can lead to severe pain, headaches, or loss of concentration, with the potential to cause a high-speed accident," he writes.

"They may also reduce the controllability of the car, thus increasing the chance of an accident. The FIA has therefore concluded that cars with excessive oscillations or high levels of grounding may be deemed to be of a 'dangerous construction', the term 'construction' here extending to cover matters such as the aerodynamic configuration of the car, or its mechanical set-up."

He stresses that under both the F1 technical regulations and the international sporting code "the stewards may disqualify a vehicle whose construction is deemed to be dangerous."

He then adds: "While in the future the FIA will consider implementing measures that will reduce the propensity of cars to exhibit such aerodynamic oscillations, in the short term, the FIA considers it the responsibility of the teams to ensure that their cars are safe at all times during a competition."

Two measures are being adopted to address the issue. Firstly there will be a stricter interpretation of Article 3.15.8.a of the technical regulations, which relates to plank stiffness and skid wear.

Some teams have been sceptical about how the cars of rivals have been bottoming so much this year and yet still meeting FIA approval post-race, and that some teams may have taken advantage of flexing limits. 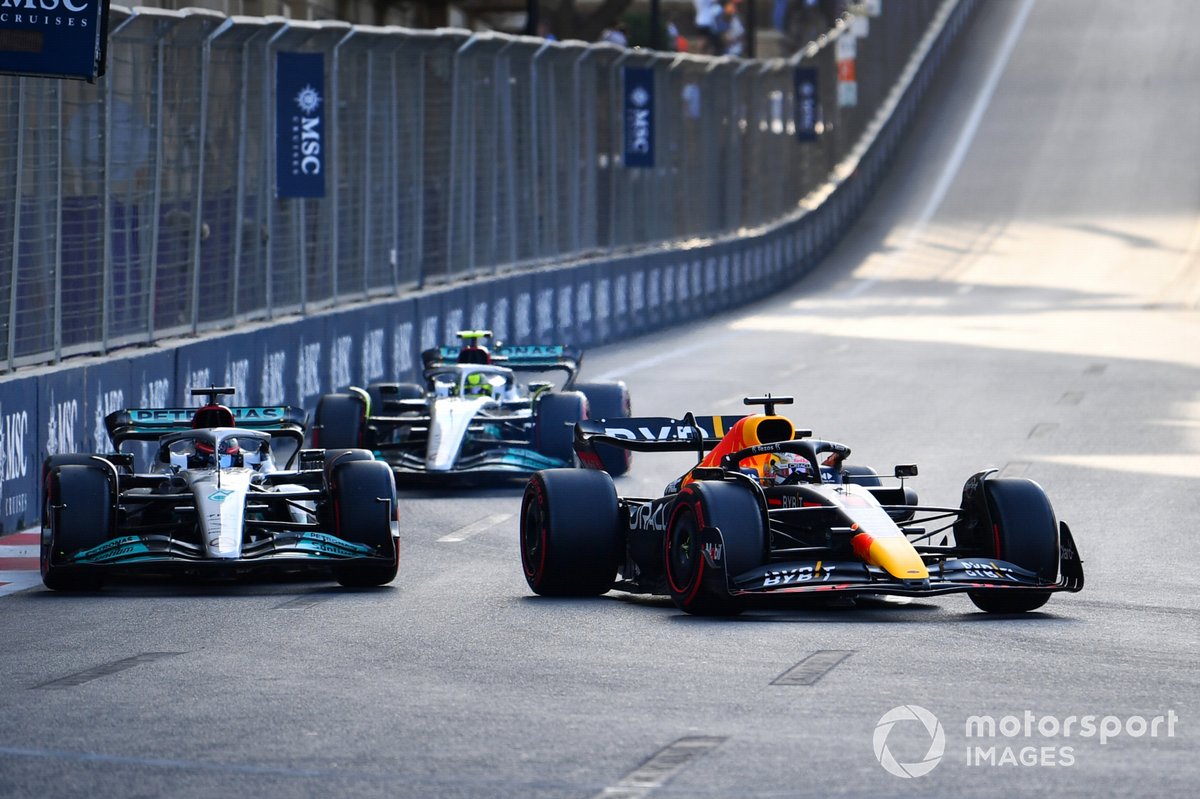 Indeed Tombazis suggests that some teams may have been gaming the rules, noting that "we consider significant deformations over and above those accepted under Article 3.15.8.a…to be contrived to achieve significantly lower rideheights, and hence an indirect aerodynamic gain."

How the FIA will henceforth measure wear and flexing is outlined in great detail, including a draft of planned changes to the wording of the rules – changes that remain subject to approval by the World Motor Sport Council before can be applied in France.

More contentious is the second part of the clampdown, which is the creation of an aerodynamic oscillation metric, or AOM.

After studying the cars in Canada, the FIA has come up with the equation that the teams now have to comply with, which involves parameters such as the length of track used in the calculation, time and the vertical acceleration.

The key to it is the standard FIA external accelerometer that is fitted close to the centre of gravity of each car, and which communicates via the accident data recorder, or ADR.

Its signal will be used "to calculate the metric (AOM), which is a representation of the energy associated with instances of large vertical acceleration and is expressed in J/kg/100km."

The accelerometer will provide the FIA will real time data on the vertical acceleration for each car, and this will in turn be compared with the limit as prescribed by the FIA, which will be known as AOM.

This has been set initially as 10 J/kg/100km, and it may be revised "as more data becomes available, or if driver feedback suggests it is not enough".

In a sprint race or grand prix race the average value of the AOM (or AOMₘₑₐₙ) for each car will be calculated over "all the eligible laps".

Only what are considered to be actual racing laps by the FIA will be taken into account in order to create this average, so it won't include in- or out-laps, the first two laps after the start or a restart, any running behind a safety car or under the virtual safety car, or any laps run on wet or intermediate tyres.

It's made clear that teams face exclusion if they exceed the mandated FIA limit: "Any car whose AOMₘₑₐₙ exceeds the stipulated AOM will be reported to the stewards with the recommendation that they be excluded from the results of the sprint or race." 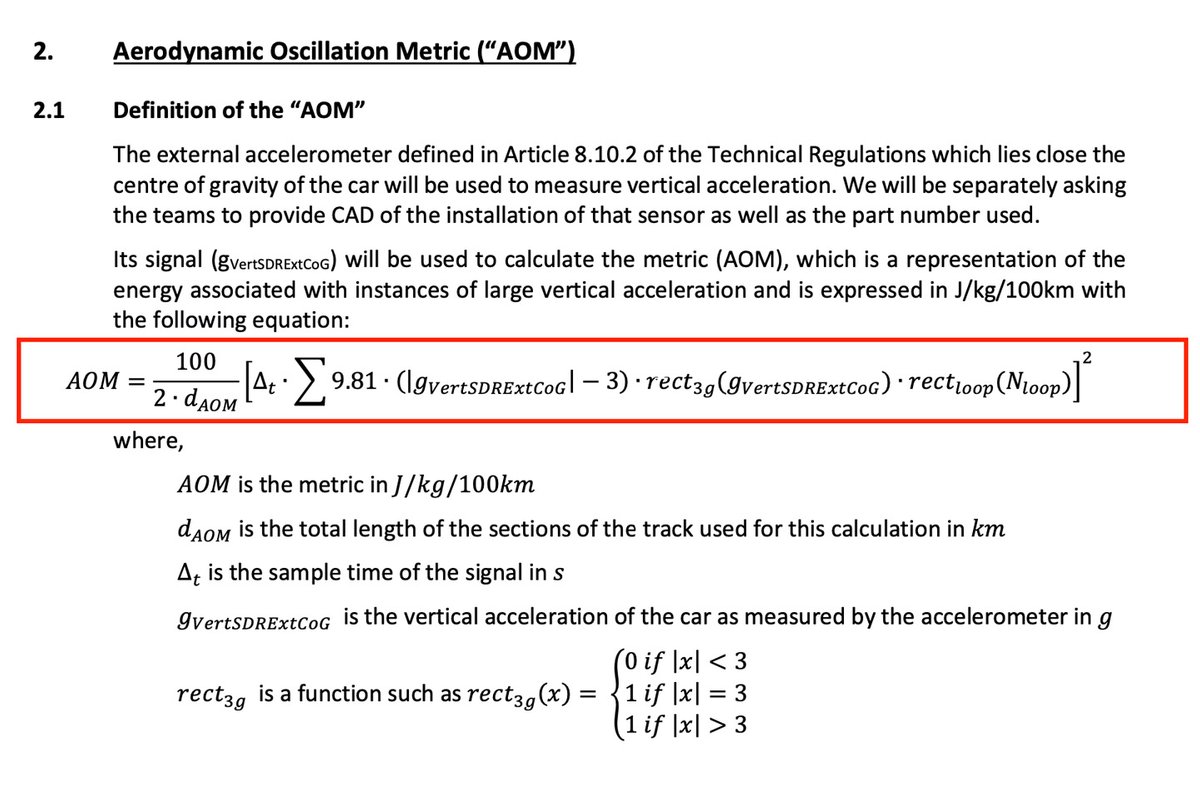 However, in 2022 teams will have three "jokers" to play. They are allowed to exceed the limit by less than 20% at three races without being reported, giving them some extra leeway to get their cars to operate within the limits.

Tombazis conceded it's still early days for this initiative, and that there is still much to learn.

"In this first implementation of the AOM, the FIA recognises that it primarily addresses the issue of grounding, but not the issue of pure aerodynamic oscillations," he notes.

"More analysis needs to be carried out in order to best implement additional terms that will capture aerodynamic oscillations, provided of course they are proven to cause driver discomfort and safety issues.

"We stress that we expect the driving of F1 cars to be a physical exercise and that we are not aiming for what could be considered to be a 'smooth set-up'."

Tombazis also confirmed the FIA is considering the introduction of further sensors in order to get more accurate measurement of oscillations and calculation of the AOM.

It also intends to monitor sensors on drivers, such as in-ear accelerometers, as well as observing face camera images, although those will be for information only and won't have a regulatory impact.

So what of the longer term? The FIA hopes to make rule changes for 2023 that will reduce oscillations, with a downforce reduction understood to be on the agenda.

Tombazis notes: "It remains our objective to implement changes for 2023 which will inherently reduce the propensity of the cars to exhibit aerodynamic oscillations.

"In due course, teams will be asked to support these evaluations in CFD by performing a range of modifications on their car, and reporting back to the FIA their results." 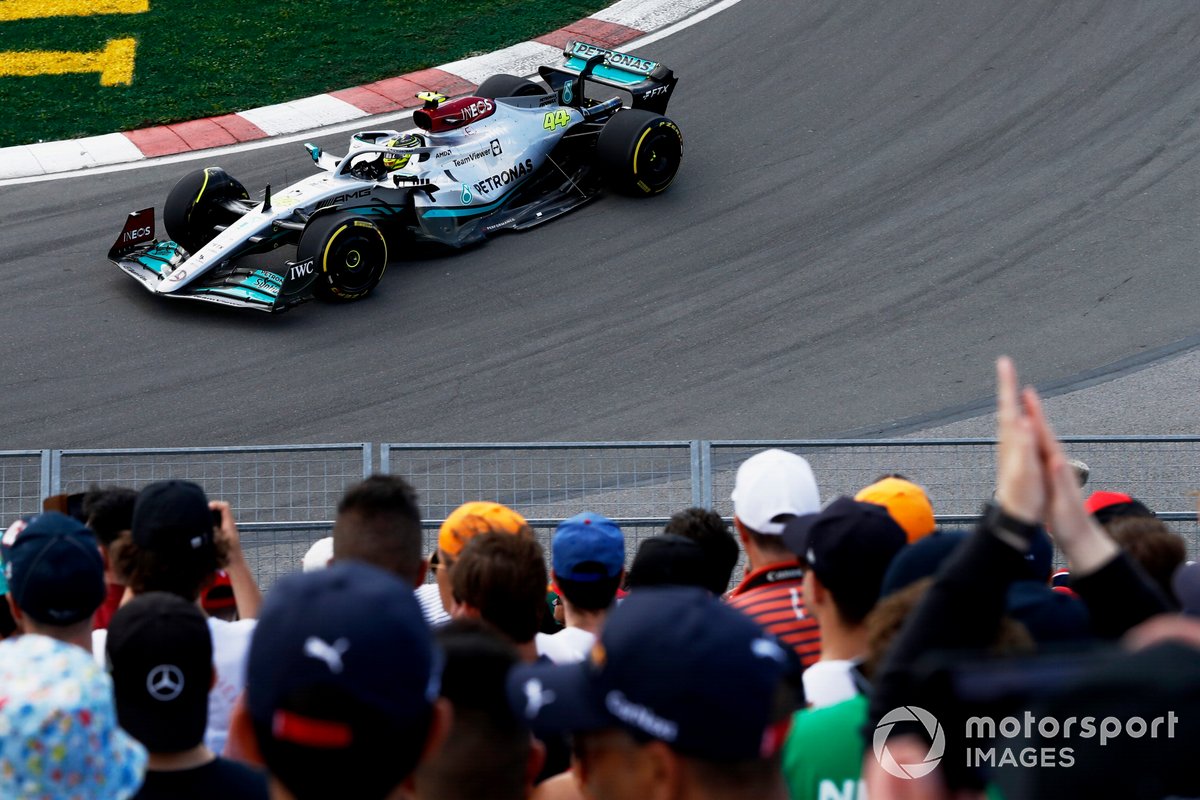 In addition, the FIA intends to take another look at plank wear for 2023 and beyond.

"The plank-related restrictions outlined above aim to provide a level playing field between all the competitors, but it remains desirable to introduce a controlled and fair compliance for the bottom of the car," Tombazis writes.

"Certain competitors have proposed a concept whereby part of the plank could be constructed from a compliant standard material, e.g. rubber.

"We confirm that we remain very open to these proposals and will seek consensus amongst the teams for such a measure."

As noted, teams have the Silverstone and Red Bull Ring races to understand the FIA metric, measure how their own cars compare to it, and prepare to comply with the rules at Paul Ricard.

And assuming that the revised wording relating to planks is approved by the WMSC, they will have to comply with those requirements as well. It remains to be seen if and how any of the changes impact the competitive order - and indeed if all the teams are able to comply.