Vandoorne finished three places and more than a minute behind team-mate Fernando Alonso in 12th after starting 13th. He lost places at the start of the race and drove over the run-off at the penultimate corner on a difficult first lap.

Vandoorne then said over the radio: "Honestly I have no rear grip, is there anything I can do?", before McLaren told him it was "difficult to help him" with the settings.

The McLaren driver said it was a challenging start to his race.

"It was a very difficult start to the race, I think there was some kind of damage to the car or something. At least, [it] was wrong in the beginning," Vandoorne said.

"It really felt like a rally car to drive out there.

"We went into the pits early to change the tyres to assess the damage on the car as well, and after the pitstop we still continued to struggle for a while.

"The pace gradually recovered a little bit but still nowhere near good."

Vandoorne suggested the problem was related to the diffuser, but that McLaren still needs to analyse the cause.

Asked to elaborate on how the car felt to drive, he said: "There was no grip at all for me and a lot of sliding around, it felt like a big problem.

"We have to check the data and see what was wrong."

Vandoorne held his position under pressure from the Haas of Kevin Magnussen and several other cars towards the end of the race and said it became damage limitation.

"I don't know how I managed [to stay ahead]," he said. "I think we maximised more or less everything with what we had today, to see the chequered flag and to keep the cars behind, in the end, was probably the best we could do."

Alonso: We can be proud of Honda partnership

The Abu Dhabi Grand Prix was McLaren's last race with Honda ahead of its switch to Renault power next year, following three difficult years with the Japanese manufacturer.

But Alonso believes that after an "important" final race with Honda, they can be proud of their work together.

"It was an important race for this project," he said. "We wanted to finish in the points.

"We did a solid race and we scored two points, so happy with that."

"[It's been] three years of this project. We should be proud of what we tried to do.

"We didn't succeed in terms of results, but everybody worked very hard.

"We split our ways but hopefully we both find results in the future."

Alonso also admitted his focus has been on 2018 in recent races.

"I've been thinking about next year for a couple of races already. I think podiums, top positions are our aim for next year." 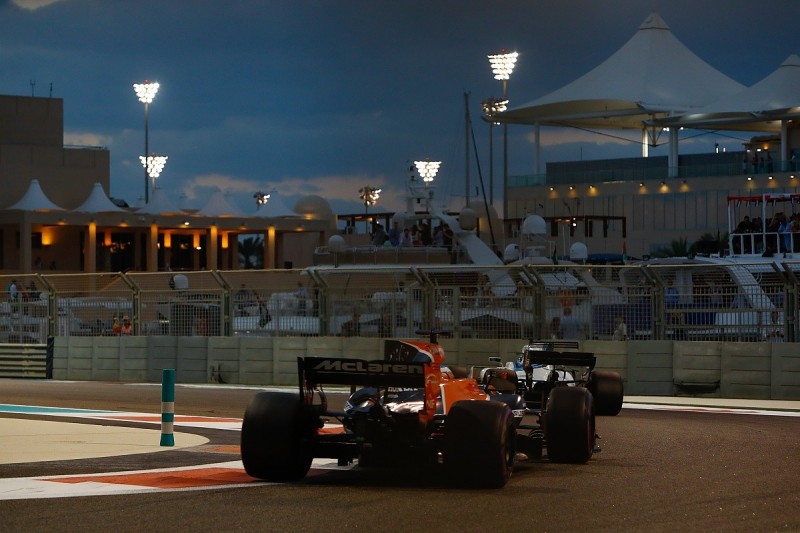