At the Belgian Grand Prix, Romain Grosjean finished 15th place and just 3.9 seconds behind Sebastian Vettel and 1.8 seconds behind Charles Leclerc, having ceded a place to the Monegasque driver in the closing stages of the race.

In the past being that close to the works Ferrari cars would be hugely encouraging for customer squad Haas but Steiner says the circumstances give him no pleasure.

"Obviously you get a little bit of satisfaction out of it, at least you race something," he said when asked by Autosport. "But to be honest nobody is coming here to try to beat someone for 12th or 13th position. That's not why you come here.

"When you're out there on Sunday and you race someone you feel excited about it, but when you think about it, you're really doing something which is not very satisfying, beating somebody who is struggling as well in the moment. I don't get any satisfaction out of that."

Steiner also said the speed deficit of the Ferrari-powered cars at Spa-Francorchamps didn't come as a surprise given the drop in pace Ferrari has endured since the start of the 2020 season following its controversial private engine settlement with the FIA.

"Over the last six races we knew roughly where we were," he said. "What we didn't exactly know was how big it will be. You saw how we were driven by. We experienced that feeling already last year, so we are a little bit used to it.

"You know how I feel, there is no new power coming, the car will stay the same as well. It will be a Deja vu I guess in a week. I don't know Mugello too much, but I think it's less power sensitive. It will be fantastic.

"For sure Monza will be a big challenge. We go into it knowingly and just try to do our best the whole weekend just to get the best out of whatever we have got. That is what we need to do in this position." 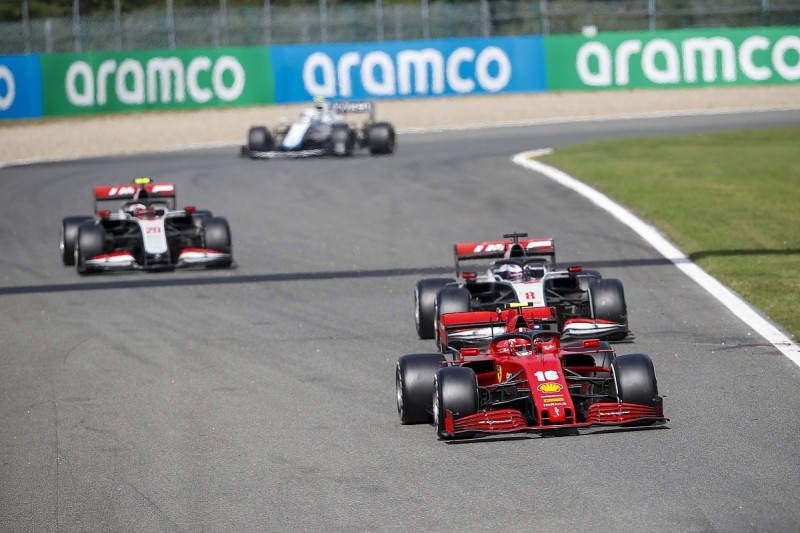 Asked about prospects for the 2021 Ferrari power unit, Steiner said he had posed the same question himself.

"The clock is running, because this year we cannot do anything about the engine," he said. "I don't know exactly where they are for next year. I know that they are working on it, because you can imagine I ask that question every day, every hour.

"I don't have a definitive answer, and it's difficult to be the spokesperson for something you're not in control of. I just relay messages, they are working hard on it because they know it needs to be better. I think the only way to find it out will be when we go back on the track next year."

F1: Giovinazzi losing a wheel in Spa crash is "a concern"