When the safety car came out after the Antonio Giovinazzi/George Russell accident, those in the second half of the field had the opportunity to pit on that lap, and Leclerc duly came in.

However, the team knew that it would be a slightly longer long stop, as the Monegasque driver had an issue with his pneumatic valve system, which needed an air refill - a procedure that all teams practice and are prepared for.

"Both drivers were very near Turn 17 and therefore close to the pit lane entry," said Ferrari head of strategy Inaki Rueda.

"Ideally we wanted to bring them in on the same lap and do a double stop, as we did in the second Silverstone race.

"However, there was an unknown factor to consider, namely the fact that the engine's pneumatic valve system on Charles' car was using too much air.

"His stop would therefore have to be longer, as topping up the system normally adds three seconds."

"F1 engines use air to operate the valves which, as is the case with the oil, can occasionally consume more than normal.

"The air bottle on the car can be topped up by connecting it to the compressed air system and in the case of the SF1000, the connector is on the left-hand side. 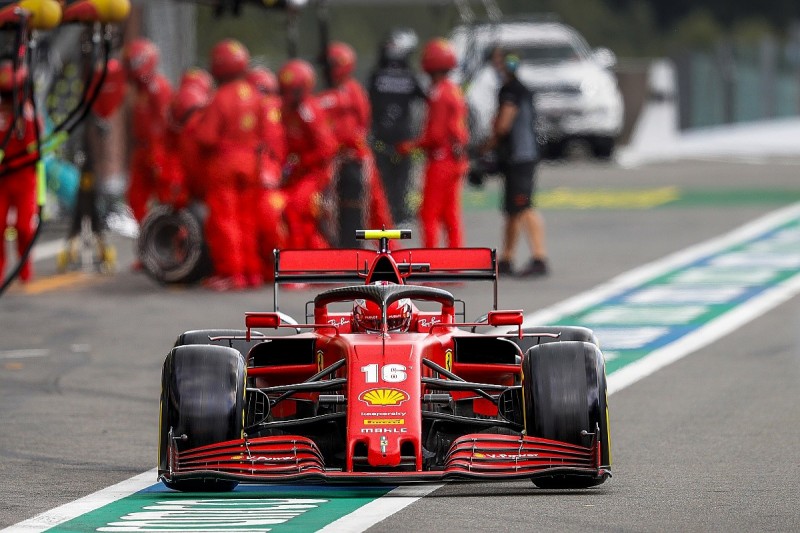 "That's why on TV we saw a mechanic attach to the car a sort of jack with a compressed air bottle.

"These things happen from time to time and we practice these procedures over the course of the race weekend."

This ultimately meant Ferrari couldn't double stack its cars during the round of stops under the safety car, forcing Vettel to complete an extra lap.

"A double stop would have penalised Sebastian, which is why he stayed out for one more lap," Rueda added.

"It meant that Charles lost a place to [Kimi] Raikkonen because of topping up the air, so that Seb was now in front of his team mate."

Leclerc was told of the delay when he drove into his pit box, and he expressed his frustration when he left, saying "Ah come on, for fuck's sake!", without realising that his radio was still on.

Both Ferrari drivers were given hard tyres and were thus able to run to the flag, but eventually the team opted to give Leclerc a second stop for fresh tyres so that the pneumatic system could be topped up again.