Haas Formula 1 boss Gunther Steiner says he has "good hope" about the potential of team’s new car despite a lack of testing laps in Barcelona.

The team finished bottom of the mileage table for the week, with Mick Schumacher and Nikita Mazepin running only 160 laps between them.

The team also announced on Thursday evening it would complete the final day of the test without Uralkali sponsorship or colours, which resembled the Russian flag, following Russia's invasion of Ukraine - with the team set to review the future of its Uralkali title sponsorship deal next week.

The VF-22 suffered a string of problems on the first and third days of the test that kept it in the garage, including an oil leak that was the result of a Ferrari issue and was outside the team's hands.

However, a solid second day on Thursday gave Steiner some cause for optimism.

"Part of it was the floor. But in the morning we had a fuel pump issue, internal leakage in the fuel tank, so the pressure wasn't right. And then we had the battery cooling pipe leaking a little bit, and then the pressure goes away, and you cannot run the battery, because otherwise you burn it out.

"The second day was actually pretty good, we learned a lot, and that's what gives me good hope, if you get a clean day, and you make quick progress. A lot was learned throughout the second day.

“On Friday morning we had an oil leak after nine laps and took the engine out, tried to fix it, put the engine in, and the oil leak was bigger. So that was our day. The verdict on the test is the second day was good, the rest not as much.” 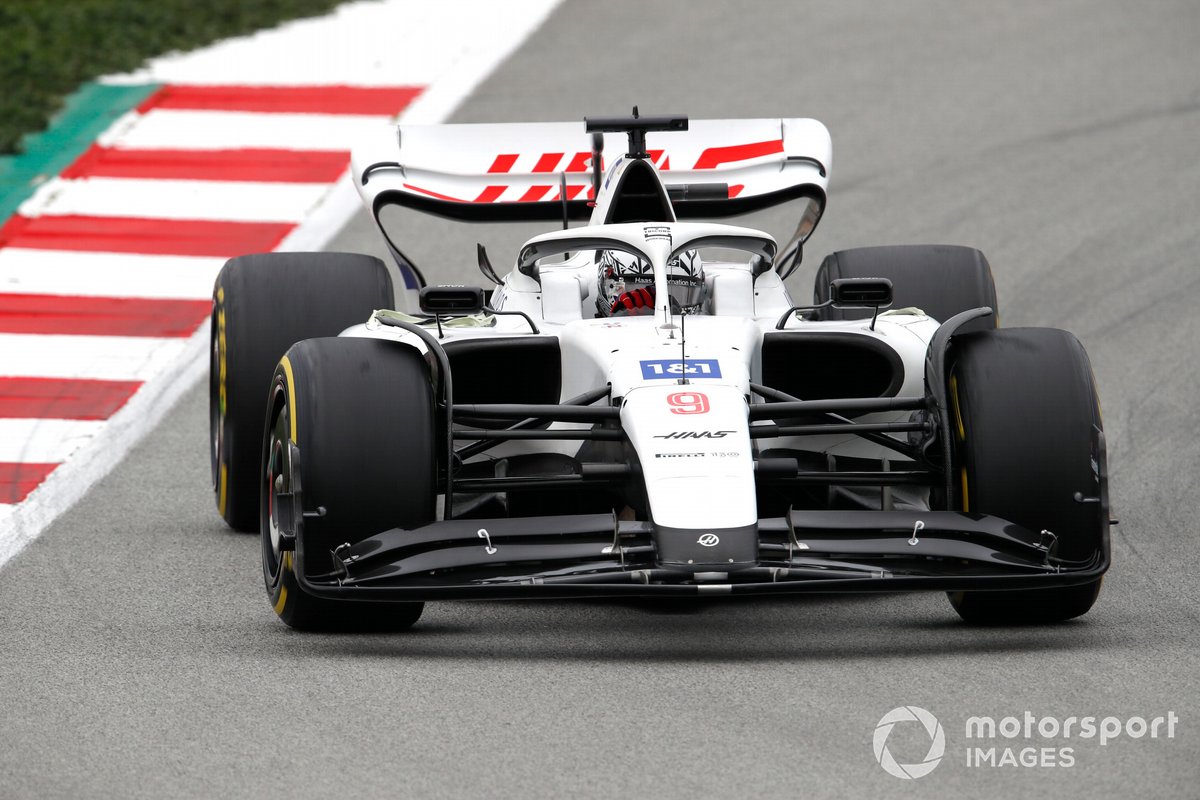 Steiner said the delays in the garage were made worse by the crew not yet being used to the brand new car.

“They are very complicated these cars, and if you take everything out the first time, for the mechanics it's just difficult. So these things, when you've got them the first time, it takes longer to see what it is and then longer to fix, because the guys have been used to a car which was almost three years old, and now everything's new.”

Like other teams Haas suffered from porpoising on the straight. Steiner revealed that the phenomenon first emerged on Monday’s filming day in Barcelona, which at least gave the team’s engineers a head start on addressing it prior to the test.

“Like everybody else, we need to learn about the floor, the porpoising. I think everybody will get on top of it. F1 teams are pretty good to react,” he explained. “We found out at the filming day, and we had staff in the windtunnel the same night. The aero guys were straight into it, to get a little bit of pressure out.”

Regarding feedback on the new 18-inch Pirelli tyres he said: “I have heard very little complaining about the tyres, which is a good thing. No news is good news, especially on tyres.

“And the wear rate is good. It seems OK, but nobody has let their pants down and really got going on it yet, so it's a bit too early to say hallelujah.”

Despite the lack of running Steiner is confident that the team will not be stuck at the back of the field, as was the case in 2021.

He also stressed that the VF-22 design team under Simone Resta is now working more closely with the race team.

“Obviously we need to learn because those guys have been a year almost isolated. They had no input on the '21 car because it wasn't needed, because we didn't do anything.

“And now coming in obviously I think the bond will get stronger over the year, because these guys now will improve this car, they will work directly on the car, while last year they worked on their project and the race team guys just went racing.”