Lewis Hamilton claimed a 100th Formula 1 career pole position as he edged out Max Verstappen to top qualifying for the 2021 Spanish Grand Prix.

Valtteri Bottas claimed third in the second Mercedes, with both Black Arrows cars and the leading Red Bull joining the rest of the Q3 runners in getting through the middle segment of qualifying on the soft tyres, on which they will start the race.

Hamilton led the way after the opening runs in Q3 with a 1m16.741s, with Verstappen slotting in 0.036s behind.

But none of the top three went faster on their second runs, with Hamilton falling from a personal best in the first sector to end up behind overall – particularly losing a chunk sliding wide and onto the big kerb at the exit of the penultimate corner.

That gave Verstappen a chance to steal ahead, but failed to improve on his best times in any of the Barcelona track’s three sectors, as did Bottas.

Ferrari’s Charles Leclerc did set a personal best on his final Q3 lap to take P4 ahead of Alpine driver Esteban Ocon and Carlos Sainz Jr, who had headed Leclerc throughout Q1 and Q2.

Daniel Ricciardo surged back from his Portimao Q1 elimination to take seventh for McLaren and beat Sergio Perez, who spun heading into the downhill Turn 13 right ahead of the final chicane on his opening run in Q3.

Perez had dipped his left-side wheels into the gravel and violently spun around as a result, but was able to get away from the danger spot before Hamilton, who was running behind the Red Bull on his way to set what was the pole time, came through.

Lando Norris finished ninth in the second McLaren ahead of Fernando Alonso.

In Q2, Ricciardo’s improvement on his final flying lap – which included the segment’s best time in the first sector – knocked out Lance Stroll. 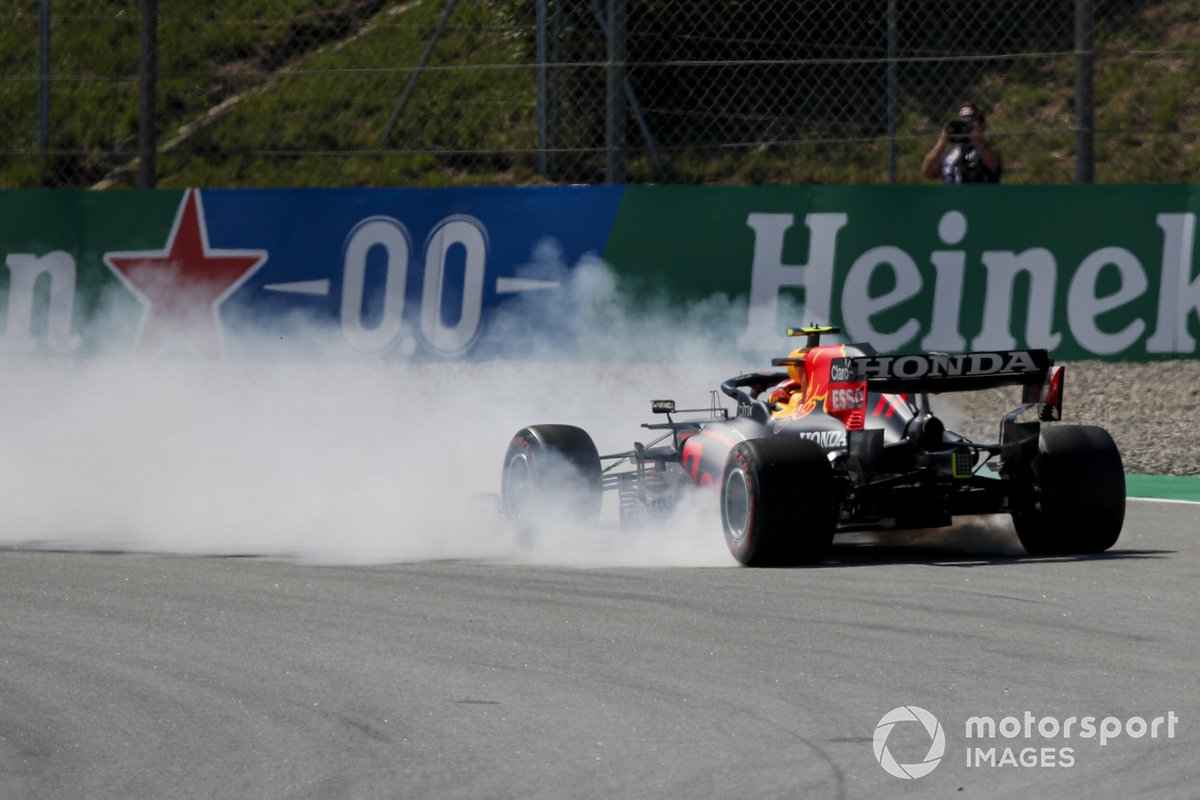 Pierre Gasly had looked rapid in Q1 but was eliminated in Q2 for the first time in 2021, finishing just ahead of Sebastian Vettel, who did not set a personal best with his final flying lap and ended up 13th.

Antonio Giovinazzi beat George Russell to P14 after the pair had escaped Q1 together for the second race in a row.

Russell ran out of sequence with the rest of the Q2 runners, setting his time ahead of the final runs in what was a single effort that was significantly off the pace in the middle part of the session.

Giovinazzi took a sighter on the mediums early in Q2 and then improved when switching back to the softs for a final run in the session’s final moments to comfortably slot in ahead of Russell.

Q1 had several big moments involving traffic backing up ahead of their flying laps. One of which, where Norris was coming to complete a hot lap and caught three cars at the final chicane, is being investigated now qualifying has finished.

Yuki Tsunoda was the shock elimination in Q1, after the AlphaTauri driver had pushed on during his warm-up lap to overtake Leclerc to run at the head of the pack.

The Japanese rookie set a personal best time on his last lap, as did all the other drivers knocked out in Q1, but Tsunoda was shuffled back down the order as others improved, with Russell completing the final flying lap to edge out Tsunoda at the very last moment.

Kimi Raikkonen ended up P17 ahead of Mick Schumacher, who scored his best on-merit F1 qualifying position in 18th (the Haas driver also finished 18th in Imola qualifying, after Tsunoda had crashed out at the start of Q1).

Nicholas Latifi ended up behind Schumacher after damaging his car running heavily over the kerbs at the exit of Campsa mid-way through Q1 – an incident that also smashed the Williams’s left-hand side wing mirror.

Nikita Mazepin brought up the rear of the field.