Rosberg crashed in opening practice, but was faultless thereafter, quickest in the second and third sessions and in a league of his own in qualifying to take pole by 0.531 seconds.

His margin on Saturday over team-mate Lewis Hamilton was 0.704s, although Hamilton did lose track time in practice due to hydraulic and suspension issues.

Wolff joined Mercedes in January 2013 and has since presided over 21 of Rosberg's 22 grand prix victories, and feels his latest win on Sunday is the best of that bunch.

"I have known Nico since 2013 and that is the best Nico Rosberg I have ever seen throughout the weekend since then," said Wolff.

"We have the tendency of saying Lewis has awesome pace.

"This is what we have seen with Nico this weekend - he was just blindingly fast, was [nearly] six tenths quicker than P2 in qualifying in Singapore, something we are not used to seeing at all here.

"In the same way, he drove the race, he had a great start, controlled the race, and on the contrary Lewis didn't have a clean weekend.

"He started off on the wrong foot and couldn't recover, and in Singapore if you are lacking laps in free practice and you are lacking direction where to take the set-up, it is a vicious circle. From there on it went backwards.

"Confidence is key around Singapore, and then if your team-mate gets out of the blocks in the way Nico did, it's difficult." 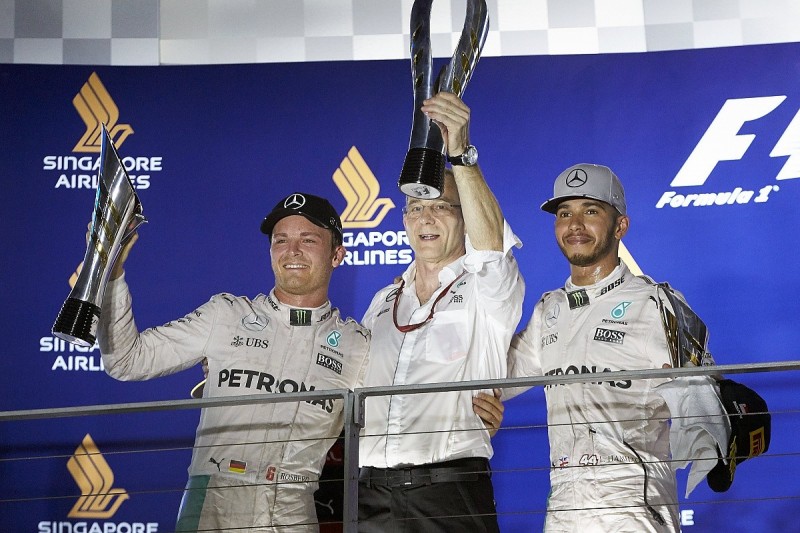 Hamilton headed into the summer break with a 19-point lead on the back of six consecutive wins that wiped out Rosberg's prior 43-point advantage.

However Rosberg has now won the last three races and - after Hamilton finished third to Rosberg and Red Bull's Daniel Ricciardo in Singapore - now leads the championship again by eight points.

The momentum swings have been considerable, and Wolff would not be surprised if the shift reverted back in Hamilton's direction come the next race in Malaysia.

"We have the tendency of talking one up and the other down, and we have had that the last three years since the two of them have been fighting for the championship - we have seen those waves," said Wolff.

"I remember talking about Lewis's momentum a couple of weeks ago, and suddenly we have this mega Nico weekend.

"In two weeks we are going to see whether that changes or stays the same in Malaysia."