Mercedes Formula 1 boss Toto Wolff felt a bit of sympathy for the nightmare scenario Ferrari faced at the Singapore Grand Prix, given some of his team's past experiences

Both Ferraris were wiped out on the first lap of the Marina Bay F1 race when Sebastian Vettel and Kimi Raikkonen sandwiched Max Verstappen's Red Bull.

That left the door open for Lewis Hamilton to seize a win that has given him a 28-point lead in the drivers' championship with six races to go.

Rather than being overjoyed at Mercedes' main rival's disaster, Wolff said it brought back memories of incidents such as 2016 Spanish GP when his own drivers Hamilton and Nico Rosberg came together on the opening lap.

"In the morning we were talking about damage limitation, and we go away from Singapore with a one and three - so from our perspective it's a great result," Wolff said when asked by Autosport for his feelings on seeing the Ferraris crash.

"Once that happens you can kind of feel for Ferrari.

"I've been in the situation of losing both cars, and you can relate how awful that feels for them.

"But I guess we're not here to make prisoners. From that moment on it was clear we were in the lead with Lewis. It was about delivering the best possible race." 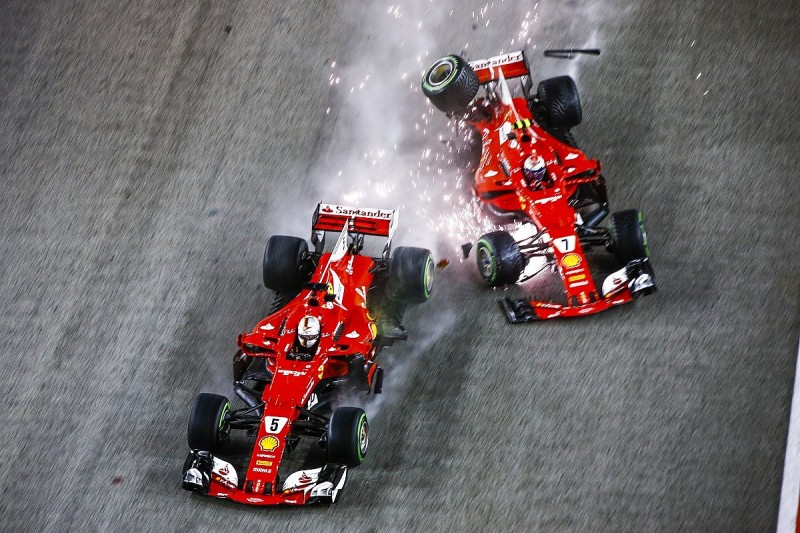 The startline crash was investigated by the FIA stewards afterwards but it was ruled that no driver was predominantly to blame for what happened.

Hamilton reckoned Vettel had been unable to see Verstappen and Raikkonen as he moved across, and Wolff concurred with his driver.

"I think what happened was Sebastian didn't see that Kimi was on the inside," he said.

"It was about defending against Max who was there.

"I guess it is very difficult to see if there's a third car on the left and this is what caused the collision."