This year's Singapore Grand Prix has been cancelled because of coronavirus restrictions, with Formula 1 now looking at alternative options as a replacement.

Authorities in Singapore have decided that it is not possible to go ahead with the race while travel limitations remain in place.

With the city state having kept tight control in restricting the spread of coronavirus thanks to strict entry rules, it was felt that opening up for thousands of people to attend the night race was not possible.

A statement issued by Singapore organisers said the decision to cancel the event for the second year running had not been easy, but ultimately it would not have been right to push on.

Colin Syn, deputy chairman of the Singapore GP, said: “We understand that our fans were looking forward to another edition of the Formula 1 Singapore Grand Prix. To cancel the event for a second year is an incredibly difficult decision, but a necessary one in light of the prevailing restrictions for live events in Singapore.

“We would not be able to deliver a full event experience fans have come to expect over the years, while safeguarding the health and safety of our fans, contractors, volunteers and staff. Ultimately, we have to be responsible, cautious and prudent as safety is our number one concern.”

No decision has yet been taken on a potential replacement, but an F1 spokesperson made clear that the sport's commercial rights holder was working with promoters worldwide to ensure a full schedule could take place.

It is understood that F1 has multiple options to slot in to the vacant Singapore slot, but no decision has been taken yet.

Turkey and China, whose races in the first phase of this year were called off, are contenders, while a second race in the United States could be a possibility. 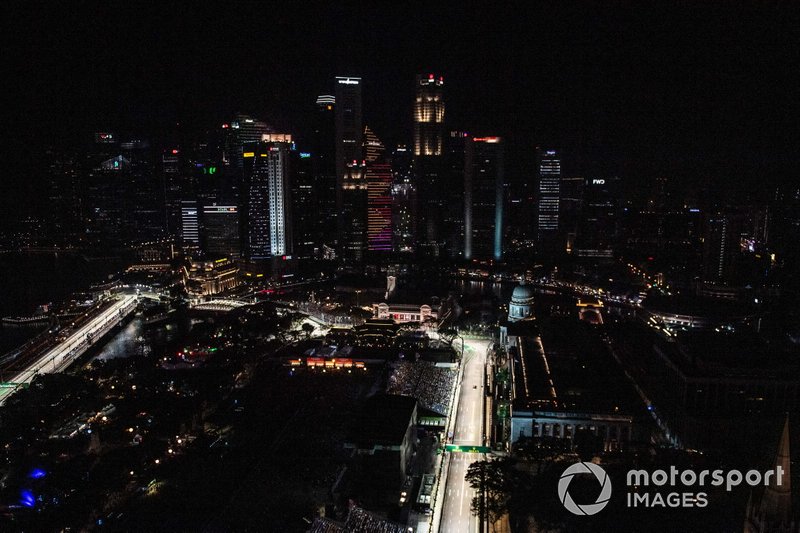 The action as seen from the Singapore Flyer

The Singapore GP had been due to take place on 3 October, as part of a triple header that included the Russian GP on 26 September and Japan on 10 October. Any race taking the same Singapore slot would need to fit in geographically with those two events.

However, another option could be to shuffle Japan forward a week, and then run a second race at Austin on 17 October, one week before the USA GP on 24 October.

F1 looks set to face ongoing challenges with the calendar over the second half of the season, with a number of countries continuing to face difficulties in dealing with the virus, as well as international travel restrictions.

Currently Brazil, Turkey, and the United Arab Emirates are on the UK travel red list, which means that British personnel, where the majority of teams are based, face hotel quarantine on their return home.

Australia has also been cautious about opening its borders to international travel, and that could remain a factor as its 21 November date approaches.

It is thought that the potential for races falling off the schedule in the second half of the year was a key factor in F1 electing to run a double header in Austria again, in a bid to try to get as many races completed as possible.