Sergio Perez believes an "angry" Kevin Magnussen moved over on him on purpose during practice for Formula 1's Belgian Grand Prix, but the Haas driver denies the move was deliberate

Perez had only just let Magnussen past when he tried to get back ahead exiting the Turn 8 downhill hairpin after Les Combes.

He had to back out of the pass, then started to pull alongside Magnussen on the run down to Pouhon before Magnussen moved to the left and forced Perez to slow down.

An irate Perez told his team over the radio that "Magnussen is so dirty, always", and raised the incident with FIA race director Charlie Whiting in the drivers' briefing.

Asked by Autosport if he thought Magnussen's move was intentional, Perez said: "Yes, he knew I was there because he had just overtaken me.

"I don't know what he was angry about but I just don't think it's the way to react.

"We've seen Kevin has reacted that way a couple of times already.

"It's not good, at the speeds we are doing you can cause a very bad incident.

"That's why I wanted to raise a point.

"Hopefully Charlie keeps it in his mind because tomorrow there could be an accident and it may be too late."

It is the second grand prix weekend in a row that Magnussen's driving has been criticised by a rival.

After the Hungarian GP, prior to the summer break, Nico Hulkenberg approached Magnussen in the media pen and called him "once again the most unsporting driver", which led Magnussen to reply: "suck my balls".

Asked by Autosport about the incident with Perez, Magnussen insisted it was not deliberate.

"I didn't know he was trying to get back again, as he'd just let me past," he explained.

"So I started warming up my tyres and he was close, but I hadn't seen him.

"It was not intentional."

Incident added to tricky Friday for both 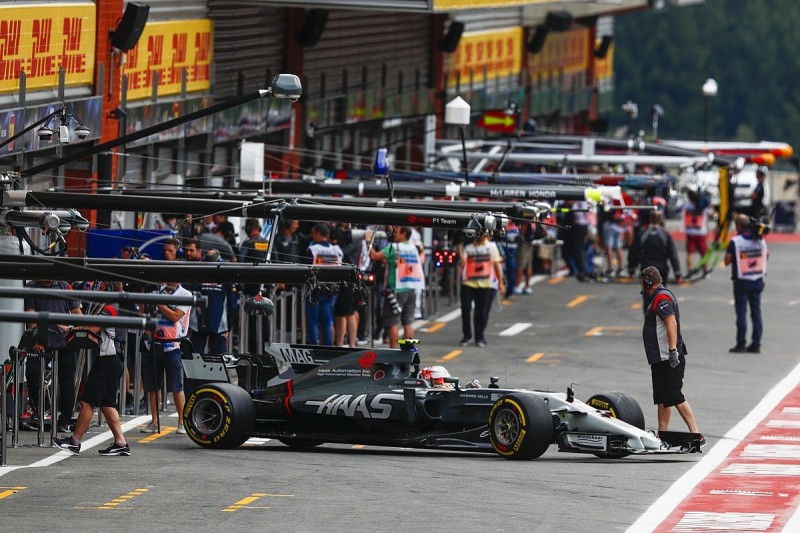 Both Perez and Magnussen had a difficult Friday, finishing practice two 12th and 16th respectively.

Perez said his day was "compromised" by having to do "some aerodynamic test items" in the morning not related to the usual downforce evaluations specific to the Spa-Francorchamps circuit's unique layout.

Magnussen suffered a loose headrest in first practice and also had a problem in the afternoon when his drag-reduction system would not deactivate properly.

Like Daniel Ricciardo and Red Bull, Magnussen said Haas had tried an aggressive low-drag set-up that did not work and would be dropped for Saturday.

"It's never good to run something on Friday that you won't run on Saturday and Sunday but it's not a disaster," he said.

"Spa is always on the limit of whether to go low- or high-downforce.

"I think we need to go back to the high-downforce for tomorrow."