Vettel led away from the start and negotiated one virtual safety car period and two full safety car deployments to secure his third win of the season and fourth in Singapore.

Red Bull's Daniel Ricciardo finished second with the other Ferrari of Kimi Raikkonen completing the podium.

The second safety car reacted to a fan getting on the track, walking on the straight after the Anderson Bridge before climbing over the barriers. 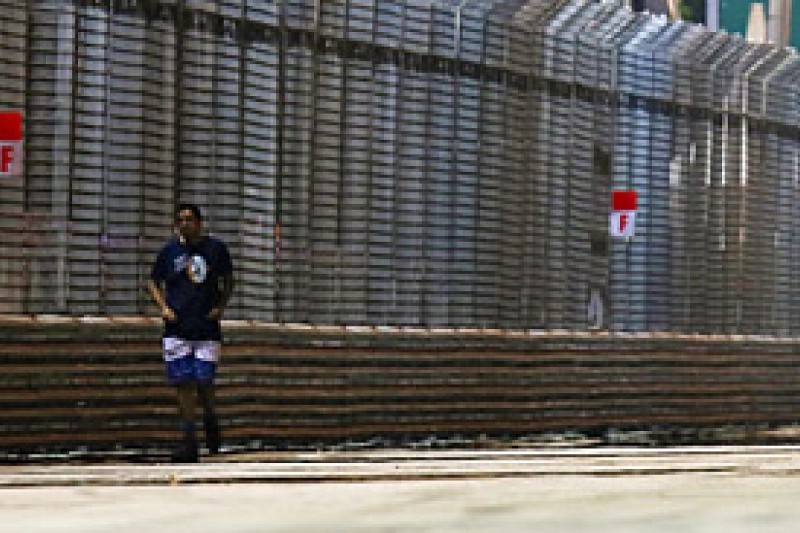 Hamilton was running fourth when he reported a loss of power and though his Mercedes team spent several laps trying to find a solution, it decided to retire the car after the Briton dropped to 16th.

It was Hamilton's first retirement in 20 races, and Mercedes' second engine problem in as many races following Nico Rosberg's fault at Monza.

After a quiet opening stint of the race, and with Ricciardo starting to close on Vettel as the leader's pace dropped away, the virtual safety car was called into action when Felipe Massa and Nico Hulkenberg collided at Turn 3.

Massa had just pitted and was rejoining the track when he met with Hulkenberg at the apex, with the German spearing into the barriers.

The stewards deemed Hulkenberg was at fault and handed him a three-place grid drop for next weekend's Japanese GP.

Massa continued, but had to pit because of a puncture to his front-right tyre before he later retired having reported gearbox issues.

His Williams team-mate Valtteri Bottas survived a gearbox glitch in the closing stages to finish fifth, ahead of Red Bull's Daniil Kvyat who pitted before the virtual safety car and dropped out of contention for a podium as a result.

Force India's Sergio Perez was seventh, holding off Max Verstappen, who fought back after failing to get away from the grid.

Toro Rosso got him going again and though he was a lap down, he was hauled back into contention for points when he was able to unlap himself when the safety car was deployed.

Following the second round of stops, Verstappen found himself ninth and fought his way past Romain Grosjean to finish eighth.

His team-mate Carlos Sainz Jr lost several places when his car dropped into neutral, something that affected Massa and McLaren's Fernando Alonso too, but Sainz rescued points with ninth after also passing Grosjean.

Verstappen was told by his team to swap positions with Sainz on the final lap but did not do so.

Felipe Nasr scored the final point in the heavily-updated Sauber after a late pass on Grosjean with team-mate Marcus Ericsson 11th.

Pastor Maldonado's survived contact with Jenson Button to finish 12th with the other Lotus of Grosjean stopping before the end but classified as 13th.

It was a miserable day for McLaren, with Button and Alonso failing to finish.

The Manors were the last of the finishers with Alexander Rossi beating his team-mate Will Stevens to finish 14th on his Formula 1 debut.