Mick Schumacher has admitted that his “weird” crash in the Formula 1 Monaco Grand Prix was caused by going offline and onto wet patches on the still drying track.

Schumacher's heavy crash caused the Monaco race to be red-flagged, as the gearbox was broken off the back of his Haas car after he hit the barrier in the middle of the Swimming Pool complex and then slid into the Tecpro barrier at the exit.

At the time the German was mystified as to why he lost control so suddenly in the high-speed section of the track, while his engineer suggested on the radio that he might have tapped the barrier immediately beforehand, and thus broken something.

However, having looked at the data, Schumacher now admits that he’d simply gone wide at Tabac and cooled his tyres on a wet patch, and then hit another a few seconds later at the Swimming Pool when he ran just 10cm wider than previously.

"The whole track was quite damp in parts,” he said when asked by Autosport about what the data had revealed. “And some others were quite dry. We came a bit wide in Turn 12 [Tabac] which cooled down the right hand side.

“And then when going through the chicane, I actually took it easy for the circumstances, for the conditions, that there were.

"And I just misplaced it a bit, and was basically 10 centimetres on the wet patch, which then triggers a double wheelspin in that case, because we have so much power. And that kind of then just threw the car into a half-spin, I'm trying to correct it, and it goes into the wall." 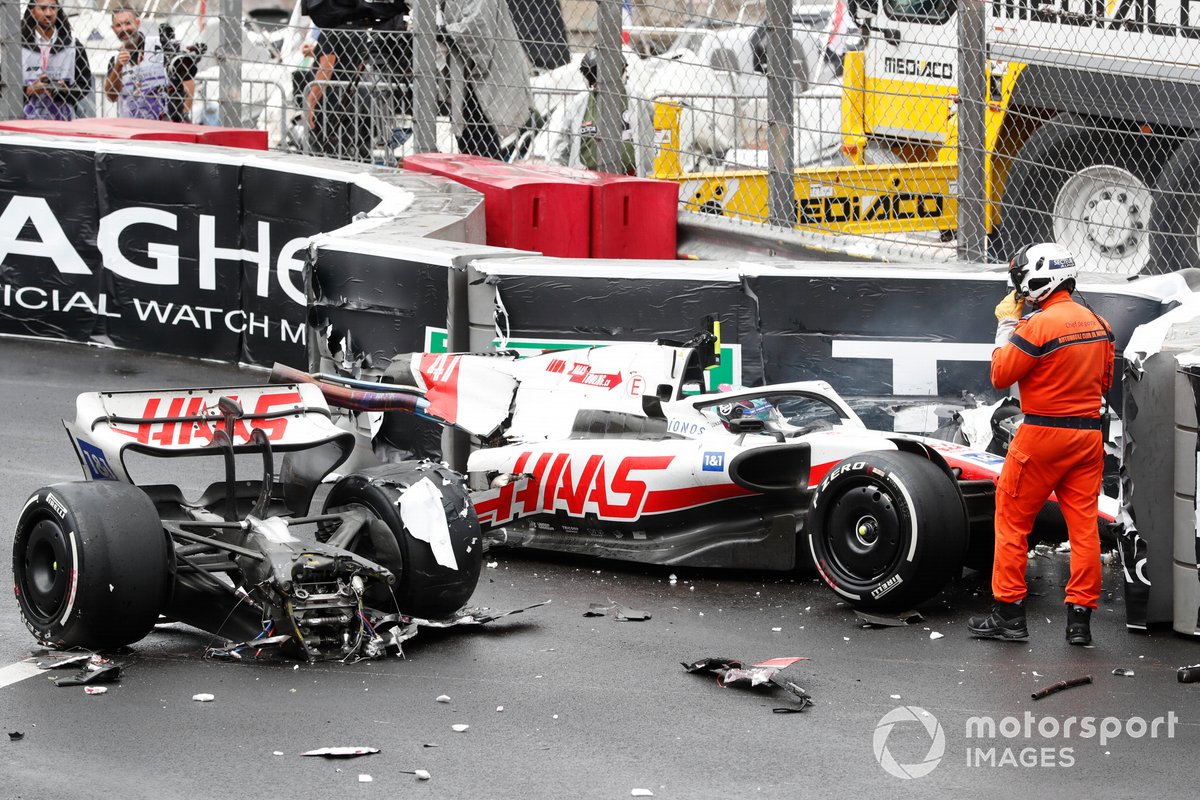 Schumacher insisted he had no prior warning that he might lose the car in such a way.

"No, it came out of the blue,” he said. “And I spoke to other people. Most of the feedback that I got said it does look really weird. So obviously, we can't check if anything broke, actually. But data suggests not, so just seems like a wet patch.

"It was really odd, because also the accident itself wasn't in any way hard. To have it split in two again is quite unfortunate, because obviously it's a lot of damage."

PLUS: The key strength Schumacher can rely on as Haas decides his F1 future

The Monaco crash came just a few weeks after Schumacher had a huge accident in qualifying for the Saudi Arabian GP that caused him to miss the race.

He explained that he has had to take risks in order to get the results that the car is capable of, and admitted that he has to learn how to balance the two.

“Especially in the midfield this year is so tight, so it's just a matter of being 10 centimetres out of place, and things go very wrong. I mean, nobody thought about the kerb beforehand in Jeddah for example, it being a trigger to these accidents. In Monaco, obviously conditions were quite tough.

“There's obviously the evaluation of risk and reward. And we try to obviously be in the points, and therefore we have to go into some sort of risk. But yeah, it's definitely something where I've just got to learn a bit more, and understand a bit more.

"I guess you always, as a driver, try and risk, and get the benefits of it. I mean the midfield is so tightly packed that if you really don't go into the risk, you end up anyways P15 or lower. And that's not where we want to be, we want to be in the top 10.

“So you do have to go to a certain amount of risk. And it's up to me to decide and find the right margin.

“But there are other circumstances also playing a role in that. So it's just a matter of dialling that in.”

Schumacher also suggested that he would be less in the spotlight if he had already scored points in 2022.

“We've had moments before where we had very good races, but weren't rewarded for it. And if I did, let's say get rewarded for it, I think we would have a bit of a different conversation right now about these things. So it's just a matter of time, really."

Schumacher has lost the use of the gearbox that was ripped off the car in the crash, while his chassis is currently under repair at the Haas factory, but his Ferrari power unit is still useable.