Carlos Sainz Jr believes Nico Hulkenberg would stay in Formula 1 "if it was about speed and talent", after Hulkenberg was dropped by Renault and snubbed by Haas for 2020

Hulkenberg will be replaced by Esteban Ocon at Renault after this season and was thought likely to move to Haas instead, but the American team has decided to keep Romain Grosjean.

That means Sainz's ex-Renault team-mate Hulkenberg is at risk of being forced out of F1.

Asked by Autosport for his take on Hulkenberg's situation, Sainz said: "I think everyone knows what Nico brings to the grid, I don't think I need to explain myself much.

"But, as we know, in Formula 1, it's not always the talent or what you're capable of doing on track that is predominant.

"There's a lot of things that can be taken into account, other than your talent and how quick you are.
"If it was speed and talent, he should be on the F1 grid until whenever he wants."

Hulkenberg's options of staying in F1 appear slim, with his best chance apparently to convince Alfa Romeo he is a better choice than inconsistent rookie Antonio Giovinazzi for 2020. 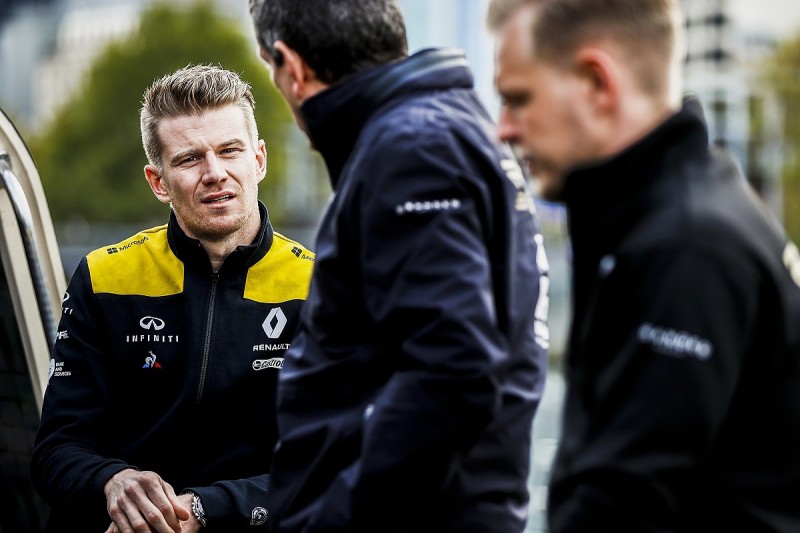 Haas team principal Gunther Steiner said on Thursday ahead of the Singapore Grand Prix that opting against offering a deal to Hulkenberg was a close call and admitted the 32-year-old should be on the grid next season.

"I wouldn't say he was happy, obviously," said Steiner.

"I think he has other options as well. I don't need to know, he doesn't have to tell me that.

"I just informed him we'd gone the other way.

"He's a grown-up, he's done this a long time, he's been here before in this position.

"I hope he finds a cockpit and we've got him around next year in F1 because he deserves to be here."

Sainz partnered Hulkenberg for just over one year at Renault, having moved there for the end of the 2017 season.

The Spaniard has since switched to McLaren, where a multi-year deal meant he was free from the uncertainty of this season's driver market, which he admitted was "really nice" and sympathised with the situation Hulkenberg faces.

"I never felt my career in risk in Formula 1 honestly," said Sainz.

"Every year that I've been with an uncertain future, I was pretty much sure that I was going to get the drive because I was negotiating with other teams.

"It's not nice, I think it's always better for an athlete to be focused on whatever your job is that weekend and [not] look around in the paddock elsewhere.

"I think the performance is always better as a driver, athlete, if you focus on the race then be focusing on something else."