George Russell has emphasised that he will drive for Williams in the 2021 Formula 1 season, calling his post-Sakhir-race comments about potentially joining Mercedes full-time before 2022 a "throwaway remark"

After Russell's starring drive in the second Bahrain race, where he was making his Mercedes race debut following Lewis Hamilton's positive COVID-19 test, he said "from Toto [Wolff's] perspective, hopefully I have given him a headache, not just for 2022, maybe sooner".

This referred to the expected seat alongside Hamilton should Mercedes not retain Valtteri Bottas in the future after signing the Finn to a contract extension for 2021 back in the summer.

When asked about those comments in the pre-event press conference for this weekend's Abu Dhabi Grand Prix, Russell said: "Yeah that was just a throwaway remark in the heat of the moment.

"Obviously emotions were high and what have you.

"But yeah, ultimately I have a contract and I'm a Williams driver for 2021."

Both Russell and Williams had highlighted the benefits a temporary promotion to Mercedes would give the Briton - in terms of learning the ropes at a front-running team and dealing with the increased pressure and scrutiny of racing at the front of the F1 pack - before last weekend's race.

The theory is that he will return to the squad where he is contracted to race for a third season in 2021 as an improved driver, with fresh ideas.

"There is a lot [to report back to Williams]," Russell said, when asked by Autosport if he had already identified lessons that would benefit his regular team. 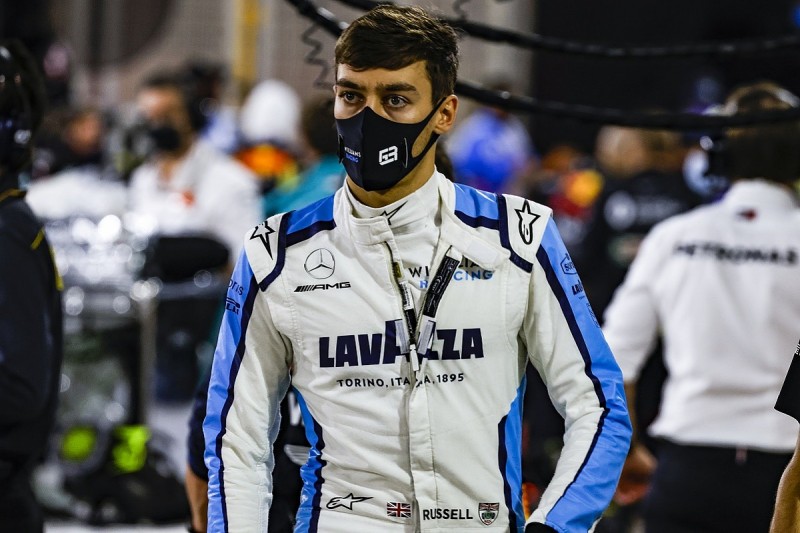 "Obviously not too much I want to say into the media because then I'm just giving that away to the rest of the grid.

"So, there's a number of things that I can go back to Williams with: being a better driver, more confidence and a few things that will help push the team forward."

Speaking in the pre-event press conference for this weekend's Abu Dhabi GP, Russell said his family had responded to the sudden race-losing circumstances he encountered after leading most of the Sakhir race with "equal heartbreak" to his own.

He added: "My mum was in tears afterwards, bless her, and my sister as well.

"You know, we live this together, this sport. And it's so passionate, emotions are so high.

"And obviously, this was my first opportunity to not just a win, but to actually score points.

"That was such a big difference. And having that taken away from us, not once but twice, was difficult.

"But having time to reflect on the weekend. I've left with my head held high and proud of the job we managed to achieve last weekend."

Russell resumes duties at Williams for the Abu Dhabi GP after Hamilton tested negative for COVID-19 and thus could end his quarantine in Bahrain.

Haas unable to give Grosjean farewell F1 test, but hopes Ferrari can