In his first qualifying appearance for Mercedes as Lewis Hamilton's stand-in, Russell missed out on pole by just 0.026s.

It marked Russell's first appearance in Q3, having only previously qualified as high as 11th at this year's Styrian Grand Prix.

Russell said the race weekend had been "incredibly intense" as he got up to speed in the Mercedes W11 car, admitting that it felt "really alien" in his first outings.

He had topped both Friday practice sessions, but was only seventh in FP3.

"It is a really different way of driving, to be honest," said Russell.

"I'm trying to unlearn what I learned at Williams, and relearn how to drive this car fast.

"I tried a lot of things in FP3 and it didn't go well so, to be honest, I'd have been happy just to get through to Q3 after final practice.

"But no, I'm really pleased. We got it pretty much all together on the final lap.

"Obviously gutted to miss out on pole by 20 milliseconds, but if you told me last week I'll be qualifying P2 on the grid next week, I think I wouldn't believe you." 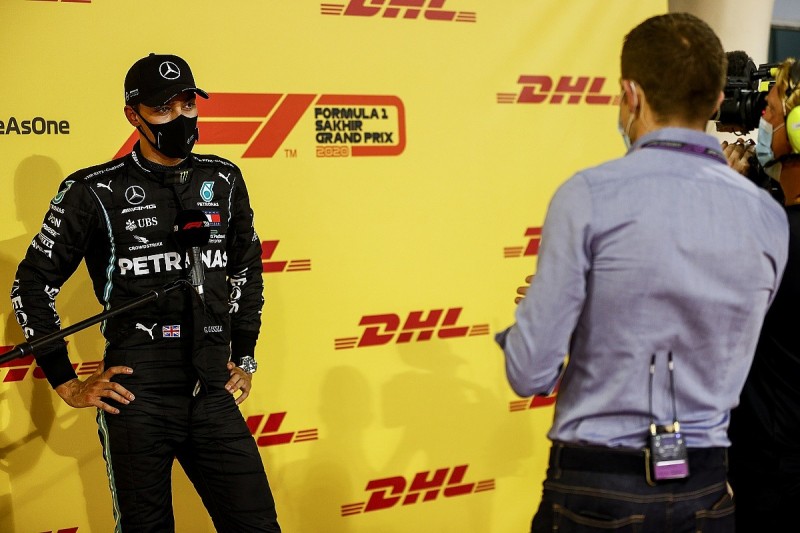 It marked the first intra-team qualifying defeat of Russell's F1 career, having never been beaten by Williams team-mates Robert Kubica and Nicholas Latifi in his previous 36 starts.

But Russell was pleased by how close he got to Bottas, whose qualifying form has been impressive this year against pole record holder Hamilton.

"Valtteri has pushed Lewis a huge amount in qualifying over the years, I think statistically there's only been a tenth between them," Russell said.

"We all know how great Lewis is, so just to be right behind Valtteri, coming in last minute [with] two days of prep I'm pleased, so let's see what we can do tomorrow."

Russell added that he is conscious of the challenges he faces on Sunday, having not started from so high up the grid or fought for a race win since F2 in 2018.

"I've got nobody in front of me tomorrow, which I've not experienced for a long, long time," Russell said.

"It's going to be really tricky. Qualifying is what I feel most comfortable with as it's just balls out, everything you've got.

"Tomorrow, you need a bit more control, a bit more finesse, and I'm just haven't had experience yet.