Current rules obliges those drivers who make Q3 to start grands prix on the tyres with which they qualified in Q2.

In Singapore earlier this month, those who started from seventh to 10th on the hypersoft tyre found themselves at a major disadvantage in the race because they had to stop very early and became stuck behind slower cars that were running long first stints.

They were subsequently leapfrogged by those who had started outside the top 10 on harder compounds.

Although it is unusual for those who start immediately behind the top three teams to be handicapped to such an extent, it also happened this year at the Chinese Grand Prix.

Some drivers are concerned there could be a repeat at Sochi this weekend, where the same compounds are in play that were used in Singapore.

"I think it was a rubbish situation to be qualifying between seventh and 10th, and have to start on hypersofts," said Grosjean.

"Which is a bit sad knowing that P13 has an advantage on P7 on the grid. "I took it very, very slowly initially in the race, I drove like a grandma, trying to take care of the tyres.

"Five laps after the safety car they just went. We had to pit and eventually ended up in traffic, with Sergio [Perez] there and [Nico] Hulkenberg, and we just couldn't do anything." 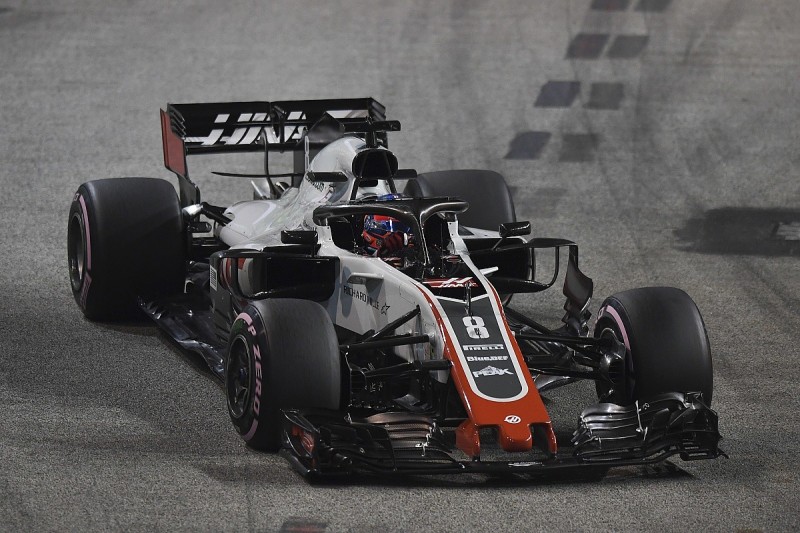 Grosjean suggested that in future he might attempt to avoid making the top 10 in qualifying.

"If here [it's] the same situation we're not going to try to make it to Q3, and I don't think that's great for F1, for the show, and for ourselves either," he added.

"Just thinking I don't want to make it to Q3, it's a real disadvantage. What's the point of qualifying then?"

Renault's Carlos Sainz Jr was one of those who started outside the top 10 in Singapore and ultimately benefited from being on a harder tyre than those ahead.

Sainz said F1 should look into the situation to try to improve it.

"It was a disadvantage for sure for the guys starting in the top 10," said the Spaniard.

"It is also true that disadvantage you're going to get it in some races, and some others [you won't].

"I got it in China, for example, and they didn't. Through the year it should normally be a level thing.

"It is a situation that is quite strange, and probably doesn't make justice to the guys that went into Q3, and it's probably something F1 needs to look into. I think they will for next year.

"It is a subject that has come up in a few meetings now with Charlie [FIA race director Charlie Whiting], and they said they're looking into it."