The Australian acknowledged that Verstappen may have better race pace, but he believes he can beat Hulkenberg, with the German's inevitable lack of race fitness playing a role.

Having been third fastest on Friday Ricciardo looked strong throughout qualifying, and he was as high as third after the first runs in Q3, before dropping to fifth, having been on the medium tyre in both runs.

"Typically, I look at the guys around me," said Ricciardo of his prospects for Sunday.

"Max you'd think will have a bit more race pace, but he's starting on the hard, which looks quite nice, but it might not work for him. He might be in his own little race.

"But I do feel that Nico can be a target tomorrow, for sure. I think even on the fact alone that he hasn't done a race or race distance yet, so for him just to understand the car, and I don't know if there were fans here maybe someone would be lucky enough to catch his head in one of the high speed corners by about lap 20!

"He's obviously got the car under him, but I think he'll have a few other obstacles to face tomorrow, so that that could certainly bring him in the battle, and I think it will be a good one.

"And I think Max is the unknown. We'll see how he goes on the hards."

Both Renault drivers' strategy options for the race were limited by a decision to run a set of hards in Friday. 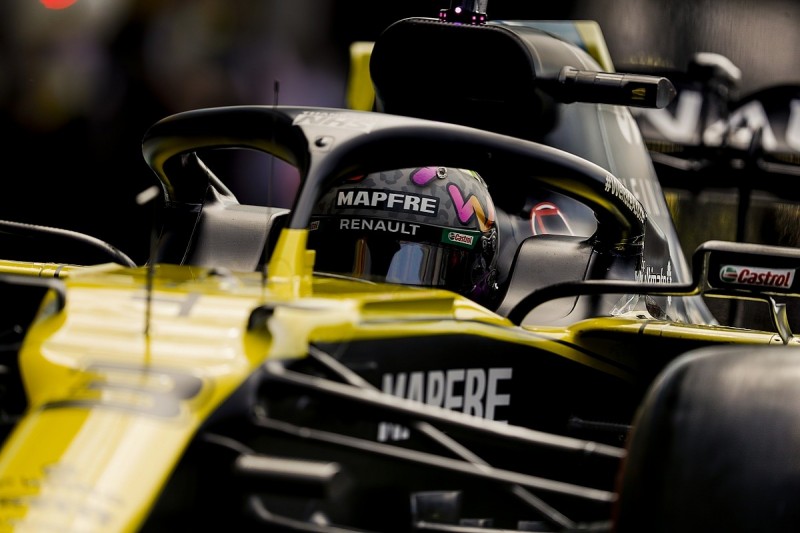 "I actually only was aware of it after like yesterday evening," said Ricciardo.

"I only realised then we were the only ones that put the hard on. I was asking a few more questions after that, even though it was too late!

"But we'll see, I don't want to sit here now and say we messed up. I don't think that's the case yet, but hopefully not.

Ricciardo was satisfied with his fifth place on the grid, despite having been third on Friday and at the start of Q3.

"It was pretty mega, it was really cool," he said of his lap.

"I think we had a bit of hype after yesterday, in second practice finishing top three, I think that got everyone a little giddy.

"But I wasn't expecting a top three today, even though we were close, but to be top five I was really happy.

"The wind did a 180 today, and that changes completely the balance, and it's like driving on a new track nearly.

"[But] I think every lap I did in quali I crossed the line with quite a lot of satisfaction.

"I know we were third for a little bit, but to be honest I think we'll definitely take fifth. I'm pretty pleased."

Ricciardo admitted that the medium-medium strategy in Q3 was probably not the right one, and that he should have taken a punt on softs for his final lap.

"Now, if we were sitting here, in quali after Q3, run one, and we've got maybe 20 minutes of time to maybe make a decision, then maybe we would weigh up and say alright, I was pretty happy with that lap. Maybe there's a tenth in it, but not much.

"We didn't really have the luxury of time, and what I felt and so on the medium that was what I wanted to go for."

F1 70th Anniversary GP: What time does the race start, how to watch & more