The French manufacturer has been the third-best engine supplier since F1 switched to V6 turbo-hybrids for 2014.

Renault allowed its works team and both customers - Red Bull and McLaren - to access more engine performance for the Chinese Grand Prix, after validating reliability in the first two races.

Abiteboul reckoned that translated into "a bit more than a tenth" in qualifying but said Renault's development plan should be worth "more than half a second" in race trim.

"We are talking about a substantial amount of in-season development," he said.
"It is more than the gap we have now, in my opinion, from the top teams, certainly in the race at least.

"But obviously top teams, top engine suppliers, they are not going to stop there."

Abiteboul would not reveal when Renault plans to introduce its performance steps, only that "we have more stuff coming in terms of engine power from race five [the Spanish GP] onwards" and bigger gains will not come until it upgrades hardware later in the year.

Renault fitted two new MGU-H components to the cars of works driver Nico Hulkenberg and Carlos Sainz Jr ahead of the Chinese GP weekend but this was not performance-related.

Part of its upgrade schedule this year will be to introduce the MGU-K it failed to get working properly last year, which will boost the performance of its energy recovery systems.

"There are a couple of improvements in the way we are operating the engine and that's more in qualifying," said Abiteboul.

"There will be a bit more coming, but obviously the next proper improvement will be with a hardware upgrade.

"That's not going to be before we introduce power unit number two, which I hope will be as late as possible." 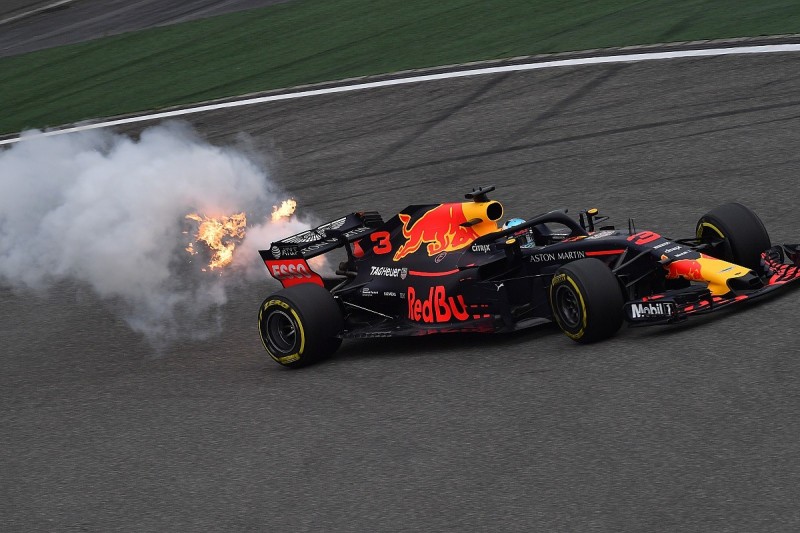 Abiteboul said the execution of Renault's development plan would not be successful if it does not get to the bottom of the turbocharger problem that caused a spectacular engine failure for Red Bull driver Daniel Ricciardo in Shanghai practice.

He said Renault already had "an idea" of the cause during the weekend but remained tight-lipped, only mentioning that McLaren suffered "a similar failure" in testing.

Ricciardo's turbo problem followed an energy store failure on his car on the second lap of the Bahrain GP the week before.

While upping its engine's performance in races will be key to launching Red Bull into the title fight with Ferrari and Mercedes, Renault knows it must address its significant qualifying disadvantage.

"We are exploring every possible avenue to mitigate that deficit," Abiteboul added.

"The first thing is to find what can make the difference there.

"I think the gap in qualifying [in China] was a bit less than it's been before.

"Again, it's still not enough and there is more to come."

Exciting races a warning against 'erratic' decisions for F1's future