Renault is committed to helping Jolyon Palmer recover from his disappointing start to the 2017 Formula 1 season, says its managing director Cyril Abiteboul

Nico Hulkenberg has made a big impact since joining Renault from Force India this season, scoring all of the French manufacturer's 14 points so far with ninth, eighth and sixth in the last three races.

In contrast, Palmer has finished 13th, retired due to a collision and finished 15th in the same events.

Last Friday at Barcelona, Palmer described the opening practice day as his best of the 2017 season, but the Briton was at a loss to explain why his pace evaporated over the next two days and was over a minute behind Hulkenberg in the race.

When asked if he had an explanation for Palmer's struggles, Abiteboul told Autosport: "No. I think during the weekend he had on occasion glimpses of a good performing package overall - a combination of the car, the set-up, the balance and himself driving - we could see that and again in particular in qualifying.

"But I think it's in general on Saturday, that's the issue, we put the car on Tarmac, it immediately works and some of the times you put it on the Tarmac and it doesn't work and you have not changed a lot.

"On Saturday, he was not happy in the morning.

"Going into qualifying it was not better and on Sunday it didn't improve.

"We have to look into that - we are committed to make this work.

"But you know - that's five races into the season, so we also have more statistics to understand what is working and what is not working." 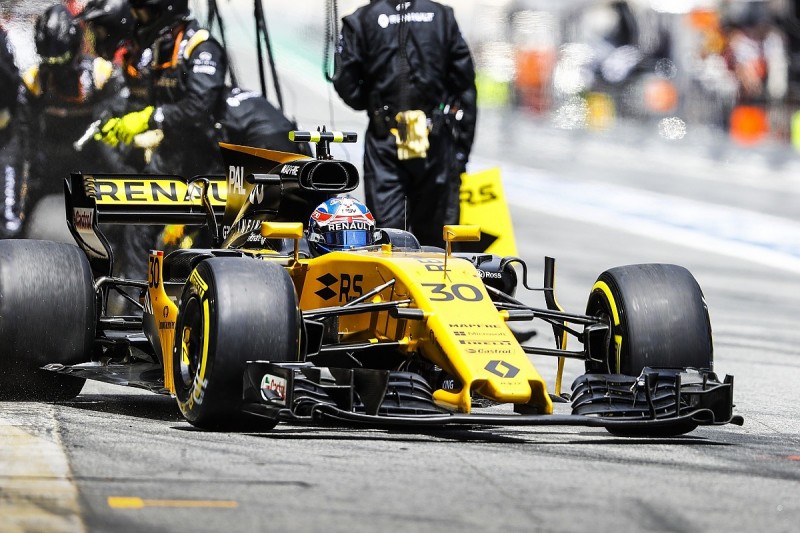 Abiteboul backed Palmer to bounce back, as he did last season when he was much stronger in the second part of the year.

"[Last year] he had a slow start but a better finish," said Abiteboul.

"He can turn it around - that is what we believe and what we are working towards."

Palmer vowed to go away and try to understand where he needs to improve ahead of the next race in Monaco.

"I wasn't able to get the pace out of the car when it was needed, however we were going better on the final set of tyres," he said.

"My job now is to sit down with my engineers and analyse the race while we also have a good look at the car too.

"I'm determined that we will do better in Monaco."