Sainz managed the problem and still finished seventh, but Renault Sport F1 managing director Abiteboul admitted it had previously cropped up in high-load corners at other tracks.

Though a fuel pressure problem also hampered Nico Hulkenberg in Q1 at Barcelona, leaving him only 16th on the grid, the team believes the two issues are unrelated.

"We had a bit of a warning on fuel pressure towards the end of the race," Abiteboul told Autosport.

"And we had to manage it, and Carlos did that by going a bit easy in Turn 3, which is always a very challenging corner for fuel pressure.

"We don't think it was related to Nico's problems because we found an object in Nico's fuel tank which was blocking.

"But it's a problem that we've seen before, and that can happen in high-g corners like Turn 3, so that's something that we need to fix, because there are a couple of races where it's going to bite again."

Hulkenberg was eliminated by first lap contact with the spinning Romain Grosjean in Spain. 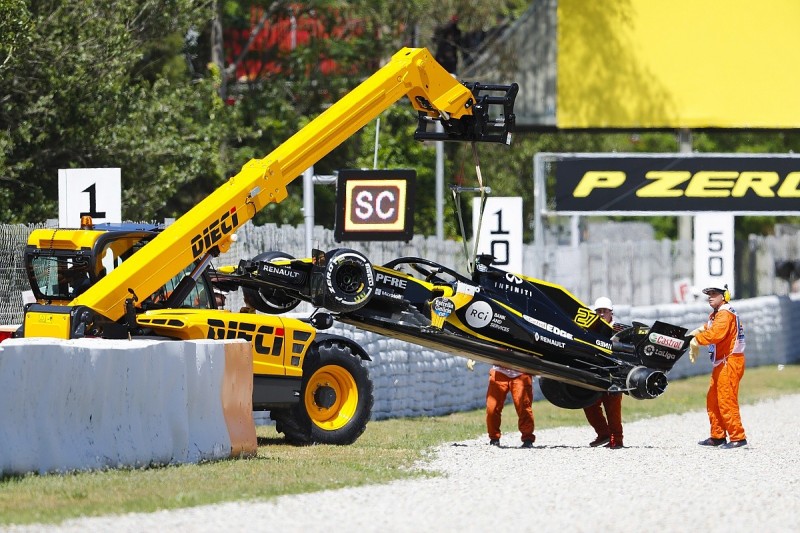 Abiteboul acknowledged that it was up to Renault to ensure that its drivers avoid technical issues and qualify near the front and clear of potential incidents.

"To stay away from trouble we need to qualify where we belong," he said.

"We don't belong to this world [at the back]. We need to give him a car that has no problems on Saturday and we won't be in that mess."

Abiteboul added that a second consecutive good result for Sainz has given him some good momentum after a difficult start to the season. Sainz followed his fifth place in Azerbaijan with seventh in his home race last weekend.

"It looked like it was easy from outside, but inside there was much more stuff going on," said Abiteboul of Sainz's performance.

"I'm really happy to have that sequence of two consecutive races, because I really think that it will help him to build his momentum. You could feel that it was an important race for him."

Abiteboul is confident that the team can do a good job in the next race in Monaco, where outright power will be less of a factor.

"It's always a good opportunity to expect something a bit different, so that's exactly what we are intending," he said.

"We have some upgrades coming for Monaco, we have two drivers who in my opinion are among the best and can always extract something interesting.