The Renault Formula 1 team has rubbished talk the legality of its blown rear wing could be questioned, because it has no doubts the aggressive concept complies with rules

The manufacturer's RS18 and the way its exhaust is angled to direct gases at its rear wing, which is shielded in heat-proof material, has attracted attention.

Although there have been suggestions that rival outfits have begun to question whether Renault's concept goes against the spirit of the rules, its technical director Nick Chester insisted the car is totally legal.

"I haven't heard anything at the moment," said Chester, when asked about rumours that rival teams had questioned the design.

"You can put your exhaust in a bodywork box, and we've just got it towards the top of the bodywork box. So far, [there are] no concerns about that."

In a bid to limit the practice of teams using exhaust gases to blow wings at the rear of the car this year, changes were made to the regulations.

Monkey seats were banned and F1 teams had to locate their exhausts within a predefined area. Teams can also angle the exhaust up to five-degrees from horizontal - something Renault has done.

While there is no regulation explicitly banning teams from blowing bodywork with exhausts, Renault has taken the idea further this year. 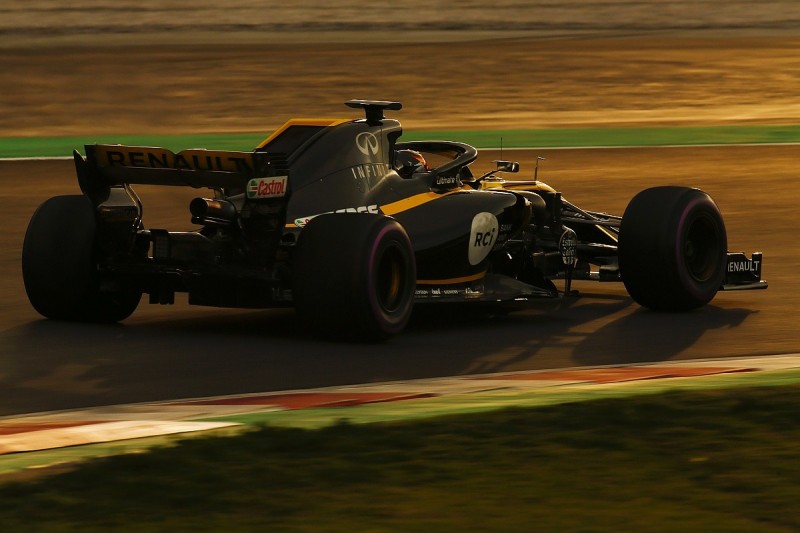 But Chester said it was impossible for teams not to have gases blowing over their rear wings because of where the rules place the exhausts.

"Everybody has to have an exhaust and all exhausts are going to blow the rear wing to a degree," he said.

"The whole reason we came up with the bodywork box for the exhaust was to limit how far you could go.

"If you run to the top of the bodywork box I don't see it as too big a problem."

The FIA had to step in to outlaw teams from using blown floors in 2011 amid claims that using exhausts to blow gases off throttle was illegal.

The governing body's stance was that because the engine was moving to help produce gas flow to aid aerodynamic performance, that was a breach of the long-standing rule that outlaws moveable aerodynamic devices.

Chester said the benefit of the blown wing now was minimal compared to how things were during that diffuser war.

"You have a turbo there and you have to recover energy through your MGU-H, otherwise your battery is going to be flat," he said.

"You are quite limited for what you can do.

"But it's like everything else. If there's a small gain there, we'll have a small gain because it's available."