© 2021 Motorsport Network. All rights reserved.
TV Tickets Fashion Giorgio Piola Jobs
Previous / Fernando Alonso 'should have backed off' in F1 pitlane clash Next / Why Verstappen did nothing wrong
Formula 1 News

Red Bull started the year trailing Mercedes and Ferrari, and Ricciardo feels the Renault power unit - rebadged as TAG Heuer over the winter - has made considerable strides to enable the team's already strong chassis to thrive.

"At the start of the year we went into Melbourne not really expecting much compared to the end of last year," said Ricciardo.

"It's been a nice refreshing improvement on both sides - the chassis is working well with the power unit.

"We're now pretty much on par with the '16 Ferrari [engine], and that's positive. They made a really big step last year.

"We've overtaken the '15 Ferrari that Toro Rosso have, so it's good, it's going in the right direction and that's all we can ask for now.

"As long as we keep seeing improvements then we are going to take what we can." 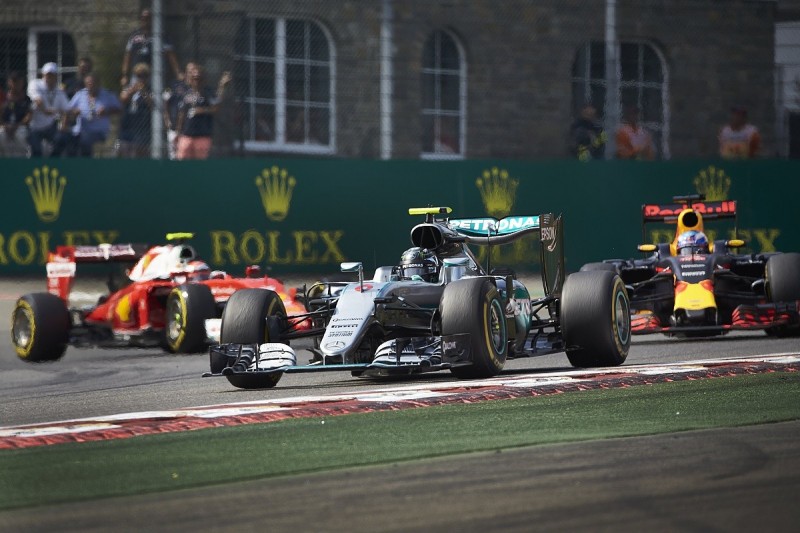 In the last four races Red Bull has turned a 25-point deficit to Ferrari into a 22-point advantage in the constructors' championship, but Ricciardo expects the Prancing Horse to perform well on home soil at Monza this weekend.

"They should be the favourite to beat us at Monza," added Ricciardo.

"But if we can beat them at Monza then that would be quite a good one for us ahead of going to Singapore and Suzuka which, on paper, should favour us more.

"But I'm not going to count them out. Seb [Vettel] can turn it on pretty well, as can Kimi [Raikkonen] on his day.

"We're prepared to be in a fight with Mercedes, but we're also prepared that Ferrari might join in on the action as well."

Fernando Alonso 'should have backed off' in F1 pitlane clash

Why Verstappen did nothing wrong