After a low-key start to the F1 season, in which it failed to run with Ferrari and Mercedes, Red Bull took an updated RB13 to Barcelona and Max Verstappen qualified within six tenths of pole, the closest the team had been all year.

However with Verstappen taken out of the race at the first corner, Ricciardo had a lonely run to what became third place when Valtteri Bottas retired, finishing 1m15.820s adrift of winner Lewis Hamilton.

The extent of the gap suggested Red Bull had made no relative progress, but team boss Christian Horner says factors such as engine settings meant things were not as bad as they appeared.

"If you look at the weekend as a whole, we have definitely addressed some of the issues and definitely made some progress with the car," said Horner, when asked by Autosport about Red Bull's deficit.

"I think Max was unlucky at the start. He picked the outside, Valtteri started off a chain reaction hitting Kimi [Raikkonen] who bounced into Max. 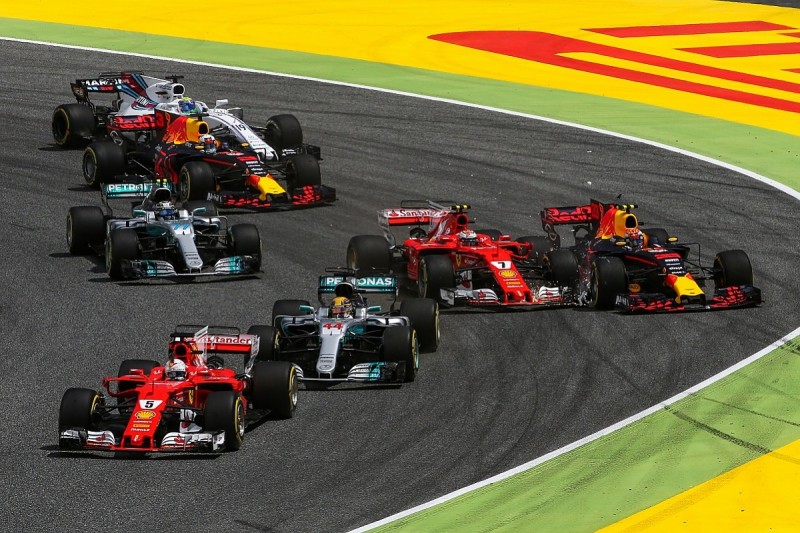 "There was a small chance he was going to come out of that corner in third, but three-into-one unfortunately doesn't go.

"Thereafter, Daniel had a pretty lonely race, benefiting from Bottas's retirement, and pretty much from halfway through the race we turned the engine down to try to save engine life, as obviously it has to do quite a few events.

"The pace to the front-running cars was pretty significant, so we still have plenty to do.

"But we feel we have made some progress. It has given us a very clear development direction and we hope to be able to capitalise on that in the coming races."

Ricciardo was never as comfortable as team-mate Verstappen over the weekend, qualifying 0.469 seconds behind, while Horner said there was also plenty of time to be found by working the tyres better, Ricciardo struggling in the final sector in particular.

"The delta [to the front] looked bigger in the race," he said.

"Daniel didn't look as happy with his car this weekend as Max, but I am not suggesting that Max would have been 20 seconds up the road.

"I think there are still issues, because when you have a gap like that, the way you are working the tyres is a clear element.

"And particularly this track, which is an interesting work out on the tyres.

"It is an area that we are definitely giving away performance. We looked relatively more competitive in the second half of the race than the first."

Hamilton spurns drinks bottle in 2017 F1 Mercedes to save weight