Daniel Ricciardo would not have been able to finish second in the Australian Grand Prix had Red Bull adhered to the FIA's Formula 1 fuel-flow sensor, Adrian Newey has admitted

Giving evidence during Monday's FIA Court of Appeal hearing in Paris, Red Bull has claimed that what it described as inaccurate fuel-flow sensor readings were costing it around 0.4 seconds per lap in Melbourne.

Ricciardo finished second before being disqualified for "consistently" exceeding the maximum permitted fuel-flow rate of 100kg/h, but after being warned by FIA head of powertrain Fabrice Lom about this during the race, the team did reduce it from laps 8-16.

The resulting loss in performance, combined with the fact that Red Bull believed the sensor not to be giving accurate readings, meant that the team opted to switch to its own fuel-flow model.

"When Mr Lom approached us and said that he felt we were using too much fuel, we disagreed with that," said Newey, Red Bull's chief technical officer.

"No team wants to court controversy and then defend itself, so if you can comply with those wishes even if you don't agree with them, then that's what you do and that's exactly what we did.

"The fact is, it then became evident that if we continued to comply, we would lose positions."

Red Bull contends that the fuel-flow sensor was unreliable because it had registered different readings with identical engine settings during Ricciardo's first three runs during Friday's opening practice session and the final run.

The team confirmed that it had received no explanation for this change, although Lom is "highly confident" that the data it was giving during Friday afternoon practice and the race was correct.

"The fuel-flow measurement as we began first practice appeared to be in good correlation with what we estimated would be delivered by the fuel injectors," said Red Bull's chief engineer for car engineering Paul Monaghan. 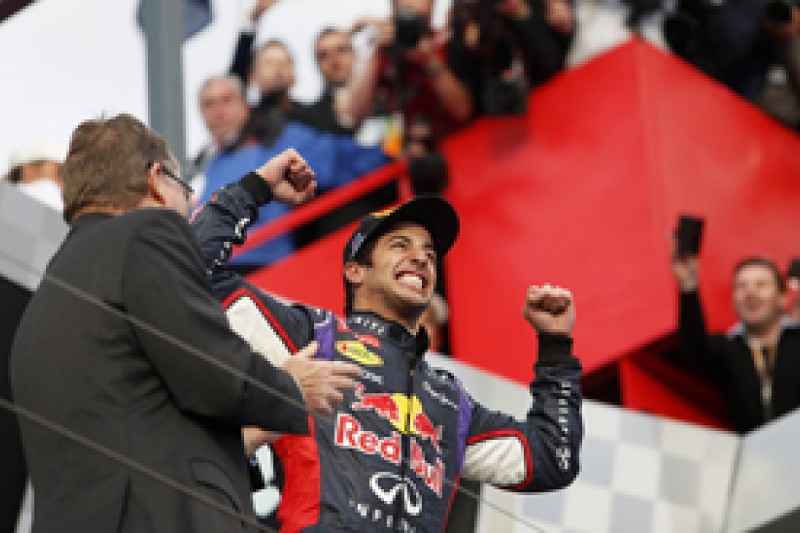 "Without an explanation and without any characteristic changes to the engine, be they measured or inferred by performance or measured by laptime, the FFM [sensor] changed its reading for P1 run four," said Monaghan.

"So we are left with two values for the sensor and no explanation was offered at the time as to why the sensor would change its value."

After using a second sensor during Saturday's running, which did not deliver any signal, the FIA ordered Red Bull to fit the original sensor and, using the appropriate offset, stick to the fuel limit.

Following this first increase in readings, Newey claimed that there was a second step during the race, with the fuel-flow sensor reading a further half-a-per-cent high.

"It was completely unexplainable from our point of view."

However, Lom disputes this interpretation of the data, saying "I don't see this step".

Red Bull contends that it did not exceed the maximum fuel-flow, and that it was justified in switching to its own fuel-flow model because the technical directive that states this can only be done under instruction from the FIA is not of regulatory value.