Water technology company BWT has been affiliated with Racing Point - known then as Force India - since 2017, and the team has run pink-liveried cars as a consequence.

A revised paint job, which will the team will run on its new RP20 this year, was revealed by Racing Point drivers Sergio Perez and Lance Stroll at BWT's Austrian base in Mondsee.

The team will now compete as 'BWT Racing Point F1 Team', and branding for its title sponsor is more prominent on the car and on the drivers' race suits compared to 2019.

The outfit's previous title sponsor, betting firm SportPesa, is no longer listed among the team's backers.

The RP20 is the second car produced by Racing Point since it was rescued by a consortium led by Stroll's father Lawrence Stroll ahead of the Belgian Grand Prix in 2018.

It was announced that the team will be rebranded as Aston Martin next year after Lawrence Stroll bought into the manufacturer last month. 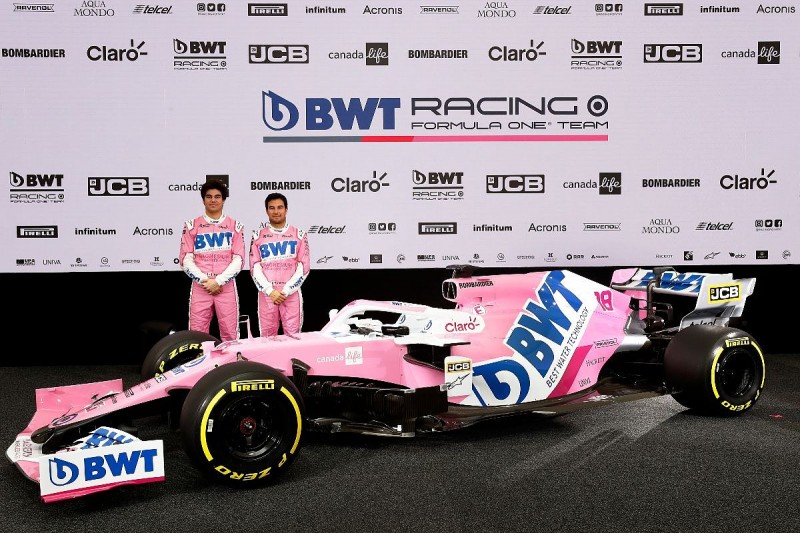 The 2020 season is the second season that Perez - who joined the team in 2014 - and Stroll will be teammates.

They finished 10th and 15th in the 2019 drivers' standings, with Racing Point ending up seventh in the constructors' championship.

"This year we want to be a strong fourth," team boss Otmar Szafnauer said.

"We want to be closer to the top three that we've ever been in the past, and we want to be top of the midfield.

"Last year was a bit of a difficult year for us, we ended up seventh, on the back end of the midfield grid, but this year we want to take a step up and be where we normally can be.

"In order to do that, we've had to do a lot of development work over the winter.

"It's not that easy, the competition is getting stronger: McLaren did a really good job last year; Renault, with the might of the motor company behind them and the 650-plus employees that they have, aren't going to be easy [to beat].

"Even Toro Rosso [AlphaTauri] with the resurgence of the Honda powertrain did really well towards the end of last year.

"But I'm confident that the work we've done over the winter on the new car, and the work that Mercedes, our powertrain partner, has done on the powertrain, and the hard work the drivers have been doing to keep fit and work in our simulators, we will have a good chance to hit our targets."

Drive to Survive: How Mercedes and Ferrari don't hog the limelight