The 1984 Formula 1 world title tussle is remembered for the showdown between Niki Lauda and Alain Prost at the Portuguese Grand Prix, but Nigel Mansell's turmoil at Lotus played a pivotal role at the Estoril finale

As the Formula 1 world remembers Niki Lauda one year on from his death, it has provided a chance to reflect on his greatest moments behind the wheel.

Autosport Editor Kevin Turner selected Lauda's herculean comeback at the 1976 Italian Grand Prix as the Austrian's stand-out moment, returning to action just six weeks after almost losing his life in a fiery accident at the Nurburgring.

But Lauda himself picked the 1984 Portuguese Grand Prix, the race in which he clinched his third and final world title, as his favourite drive for Autosport's 'Race of My Life' feature.

And while that race did feature a stunning fightback from Lauda to deny Alain Prost the championship by just half a point, the final outcome may have been different had it not been for the result of a dispute at a rival team.

The Estoril race in 1984 would mark Nigel Mansell's final appearance for Lotus ahead of his move to Williams for '85, ending an unhappy period in the future world champion's career. His close relationship with Lotus founder Colin Chapman meant a big gap was left for Mansell in the team when Chapman died suddenly in 1982, writing in his 1995 book People's Champion that he "lost my reference point" in a chapter tellingly titled "The Wilderness Years". 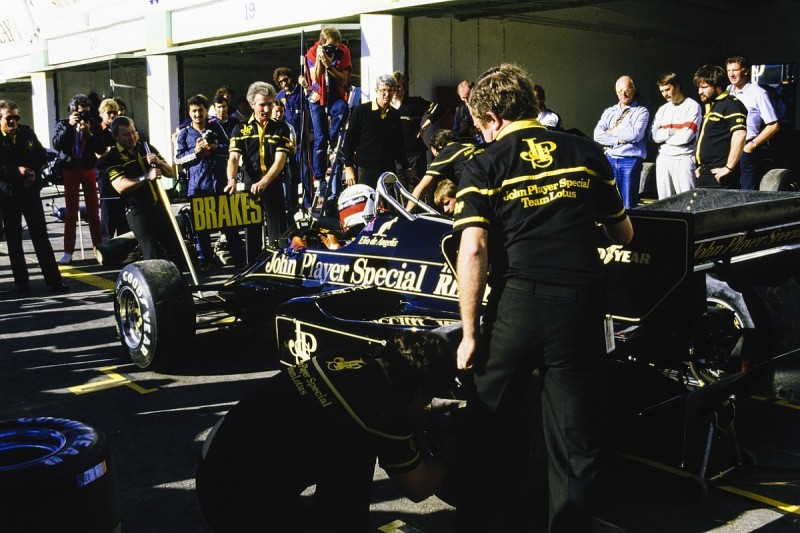 Much of the difficulties were fuelled by a hostile relationship with Lotus team manager Peter Warr, someone Mansell called "without a doubt one of the most provoking people it has ever been my misfortune to meet".

"Right from the off, he took a dislike to me because I had such a clear idea of what I wanted and how I was going to get it," Mansell wrote of Warr, who died in 2010. Chapman had tried to play peacemaker between the pair prior to his death, but Mansell found Warr actively working against him to "undermine" his confidence.

Much of this played out through favouritism to Mansell's team-mate, Elio de Angelis.

"Warr clearly didn't believe in me," Mansell wrote. "He subjected me to the real number two treatment and, by giving me no firm basis of confidence, made me feel as though the ground was falling away from under me. I was desperate, and that is no way to succeed in grand prix racing."

One of Chapman's final deals before his death was to secure turbocharged Renault engines for the 1983 season, but they were only available for one car through the first half of that season. Naturally, they went to de Angelis. Further instances made the games Warr was trying to play clear to both drivers, Mansell recalled.

"My mechanic told him that there was no way I would be able to finish if I didn't have the large set and he got into something of a row with Warr, who said: 'Do as you're bloody well told'" Nigel Mansell

"Elio and I decided to work together a bit more, to pool our information and help each other out," he wrote. "This annoyed Warr no end."

Even in Mansell's final Lotus appearance, there would be a last row with Warr that would sum up his time with the team - or, as he put it himself, "illustrated the hell I had been put through in the last two years".

Behind the wheel of the Lotus 95T, Mansell had scored points in every race he finished, as well as taking podiums at Dijon - shortly after his mother had passed away from cancer - and Zandvoort, and pole in Dallas. He qualified sixth at Estoril, six-tenths off polesitter Nelson Piquet and just 0.028s off de Angelis in fifth. Title protagonists Prost and Lauda started second and 11th respectively, the latter needing a second-place finish to take the title if his McLaren team-mate were to win the race.

Mansell made a good start to rise up to second behind future Williams team-mate Keke Rosberg, but was soon passed by Prost. The trio pulled away from the rest of the pack before Mansell overtook Rosberg, who duly dropped into the close-knit battle behind including Ayrton Senna, Michele Alboreto, Stefan Johansson and, running at the rear of the throng of cars, Lauda. 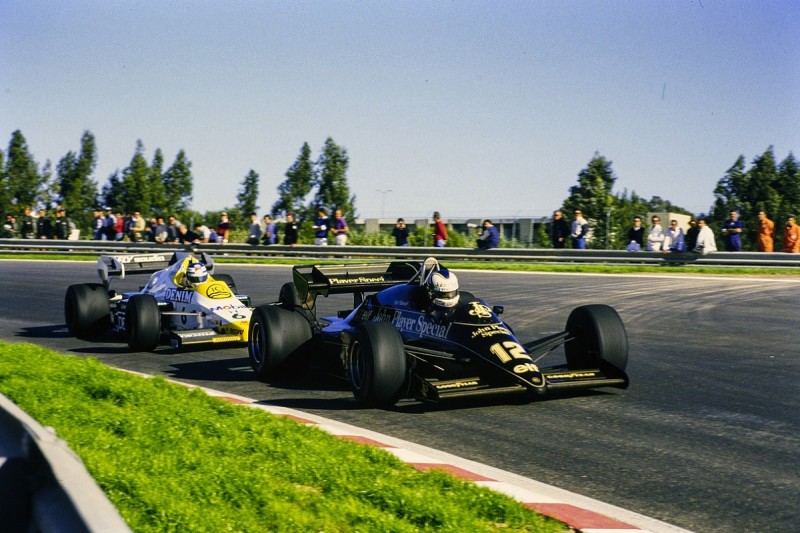 While Prost held a stable lead, Mansell was able to reduce the gap initially, whittling it down to as little as 5.6 seconds as the race neared half distance. On the same lap, Lauda passed Senna to take third and escape the traffic, but now had 37s to make up to Mansell if he wanted to win the world championship.

But then Mansell's pace dropped off rapidly, initially falling three seconds further behind Prost in one lap before a steady loss of time in the laps that followed. It wasn't a case of easing off. Mansell's brakes were causing him issues.

And again, the root of it was a pre-race decision by Warr.

"My style of driving demands very good brakes because I brake harder and later than most drivers and turn into the apex of the corner while still braking," Mansell wrote. "I always use the biggest set of brakes available.

"In Portugal, we had the cars running strongly in qualifying and things looked promising for the race. But there was only one set of large brake pads available for the race, and Warr decided that Elio should have them.

"My mechanic told him that there was no way I would be able to finish if I didn't have the large set and he got into something of a row with Warr, who said: 'Do as you're bloody well told'." 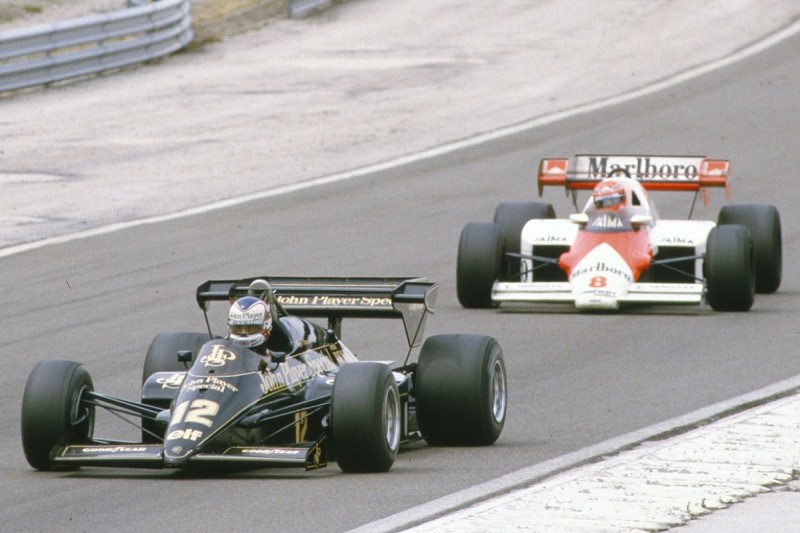 The decision left Mansell struggling with his car running second as Lauda started to make up time. But the gap between them remained huge. Lauda had been able to reduce it to 26s entering the final 25 laps of the race, only for the gap to start rising again as he struggled with a turbo issue and more traffic.

Despite Lauda later stating he believed he would have caught Mansell, second place looked safe for the Lotus driver so long as he could get his car home: "With 18 laps to go I was running very strongly in second place, heading for my best result so far - when my brakes went."

Mansell spun off the track before crawling around the remainder of the lap and eventually peeling into the pitlane to retire from the race.

Had it not been for the bitter spat between Mansell and Warr, Prost may have been drinking in the glory of his maiden F1 title that day

It handed Lauda second and, crucially, the six points he required to deny race winner Prost the world title by just half a point - which remains the smallest margin of victory in F1 championship history. He would cross the line 13s behind Prost with Senna a further seven seconds behind in third, the trio sharing a podium for the first time.

Mansell left Lotus after the race and, now free of Warr, sought refuge with Williams. He later told Autosport's Nigel Roebuck that the "percentage of bullshit was so much less" at Williams.

Warr famously said Mansell would "never win a grand prix as long as I have a hole in my arse". Mansell proved him wrong less than a year later, scoring his maiden breakthrough on home soil at Brands Hatch, and would retire with 31 victories to his name, a tally only bettered by Prost and Senna at the time. 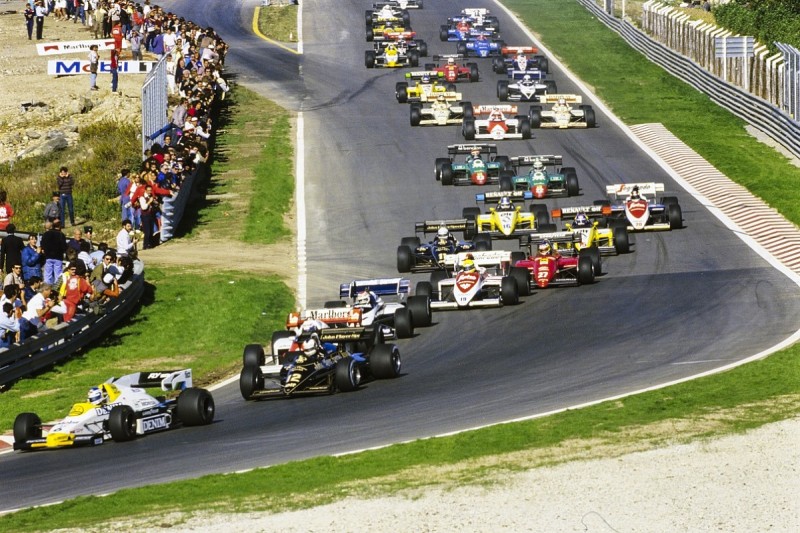 Had it not been for the bitter spat between Mansell and Warr, Prost may have been drinking in the glory of his maiden F1 title that day. But that should not detract from the titanic drive Lauda had produced to fight his way back to victory.

McLaren designer John Barnard called the race "the one time I saw Niki just chuck everything at it and go for it big time", while Rosberg praised Lauda for driving "harder this year than I have ever seen before - absolutely clean, but also absolutely uncompromising".

It was a final show of strength from F1's ultimate fighter to become world champion for a third time, almost a decade on from his maiden title. 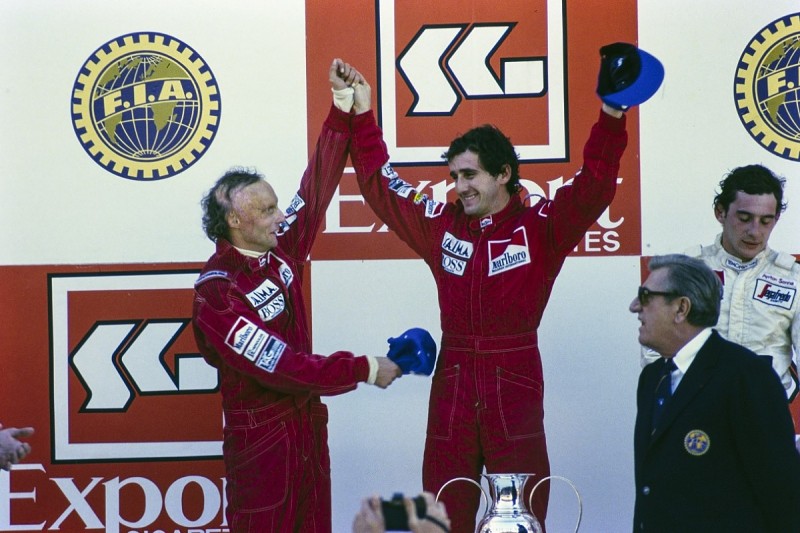