Sergio Perez called it “a bit of a shame” that Red Bull missed out on a 1-2 in Mexico after losing his late battle for second with Lewis Hamilton.

Perez sat within two seconds of Hamilton when Mercedes brought him into the pits, prompting Red Bull to go long with its strategy and open up an 11-lap tyre life advantage.

After pitting, Perez put his fresher tyres to good use, reducing a nine-second gap to less than one entering the closing laps.

But he was unable to make it through despite a late charge as both he and Hamilton struggled with lapped traffic.

Hamilton said after the race that he “didn’t really have much left on the tyres at the end” against Perez, predicting: “One more lap and I think he would have been over.”

Perez conceded that he was disappointed not to have beaten Hamilton to second, believing Red Bull had the pace to sweep the top two positions.

“It was really close,” Perez said.

“There was a lap where it was so critical to do the undercut. Obviously they pitted that lap, so we did the opposite and we went long.

“It was a bit tricky with the lapped cars as well. I reckon we all lost some time there. It was really close.

“Overtaking here is really difficult, given their straightline speed that they were really strong on. I didn’t have the chance. 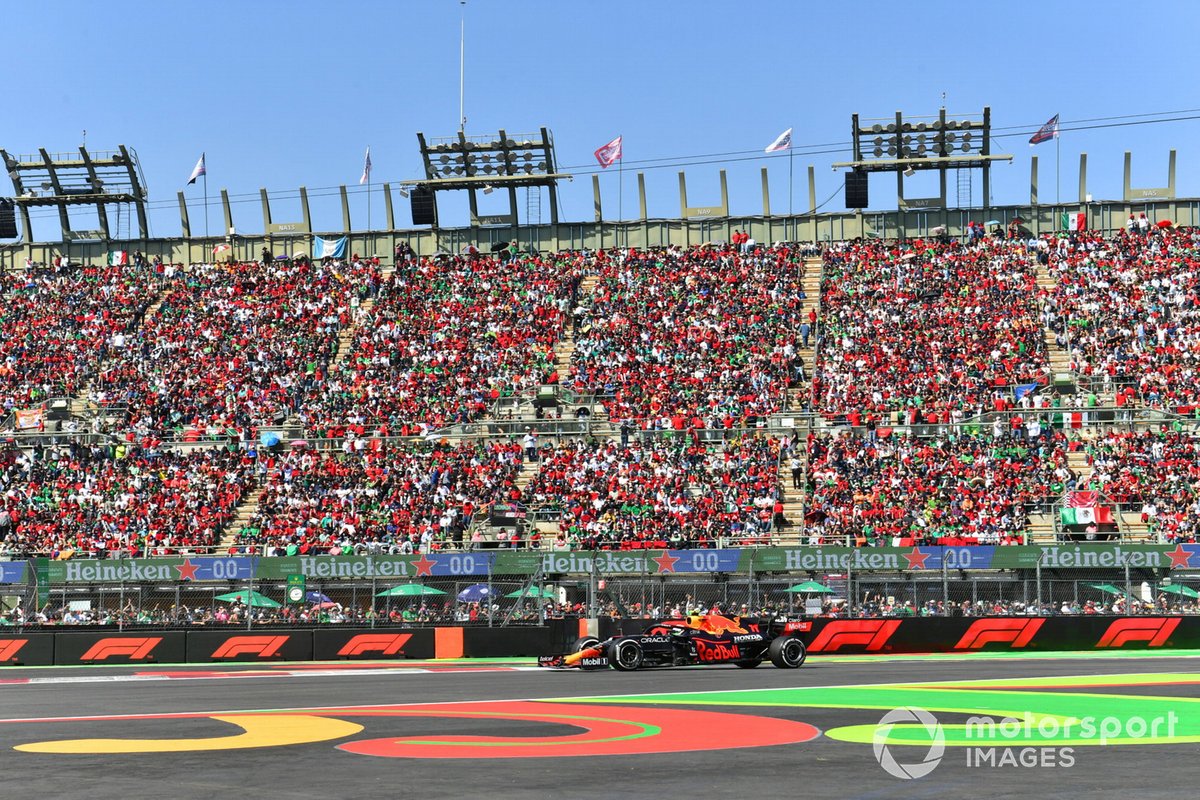 The race nevertheless saw Perez become the first Mexican driver to lead his home grand prix and finish on the podium, sparking wild celebrations in the grandstands.

“Being on the podium at your home grand prix, it’s something very special,” Perez said.

“I wanted more, I want to win the race, and obviously to finish 1-2 for the team would have been amazing.

“At the end of the day, we are such competitive people that if we finish third, we really don’t enjoy it. But today is one of those days that I must enjoy.

“The crowd and just seeing so many people so happy, and especially on the podium, like everyone that has been with me since day one, was on the podium.

“That was extremely special for me.”

The result drew Red Bull to within a point of Mercedes at the top of the constructors’ championship. Polesitter Valtteri Bottas failed to score in the second Mercedes car after being tapped into a spin at Turn 1 with Daniel Ricciardo, sending him to the back of the field.

While Perez was pleased by his recent progress, he felt Red Bull still had to understand why it had struggled against Mercedes in qualifying in Mexico.

“I was very disappointed yesterday, because I felt like we were going into qualifying with great momentum, having had a good FP3 and pace in the car,” Perez said.

“I think we are enjoying today a lot, but we have to understand what went so wrong for us yesterday, because all of a sudden, it swung around and Mercedes was a very strong force yesterday.

“But yeah. What matters is today. There’s still four races to go. Things are getting really tight.”