The FIA has confirmed that Sergio Perez will be allowed to start Sunday’s Formula 1 Belgian Grand Prix from pitlane if Red Bull repairs his car during the rain delay.

Perez looked set to miss the race after crashing during his first lap to the grid, hitting the barrier on the right-hand side of the track at Les Combes after losing control in wet conditions.

Red Bull sporting director Jonathan Wheatley informed race director Michael Masi that Perez would not be racing, only for the start to be suspended after two full laps behind the safety car due to heavy rain.

It prompted Wheatley to ask Masi if Perez would be allowed to rejoin the race if Red Bull repaired his car in time.

Masi initially said that Perez would not be able to as he had received outside assistance to get back on-track, only for Wheatley to reply: “It's not Le Mans, so I think he can do that, and mechanical assistance only counts in the race.”

After checking with the race stewards, Masi told Wheatley that the rules did not preclude Perez from starting, so long as it is from the pitlane.

Article 38.1 of the sporting regulations reads: “Any car which does not complete a reconnaissance lap and reach the grid under its own power will not be permitted to start the race from the grid.” 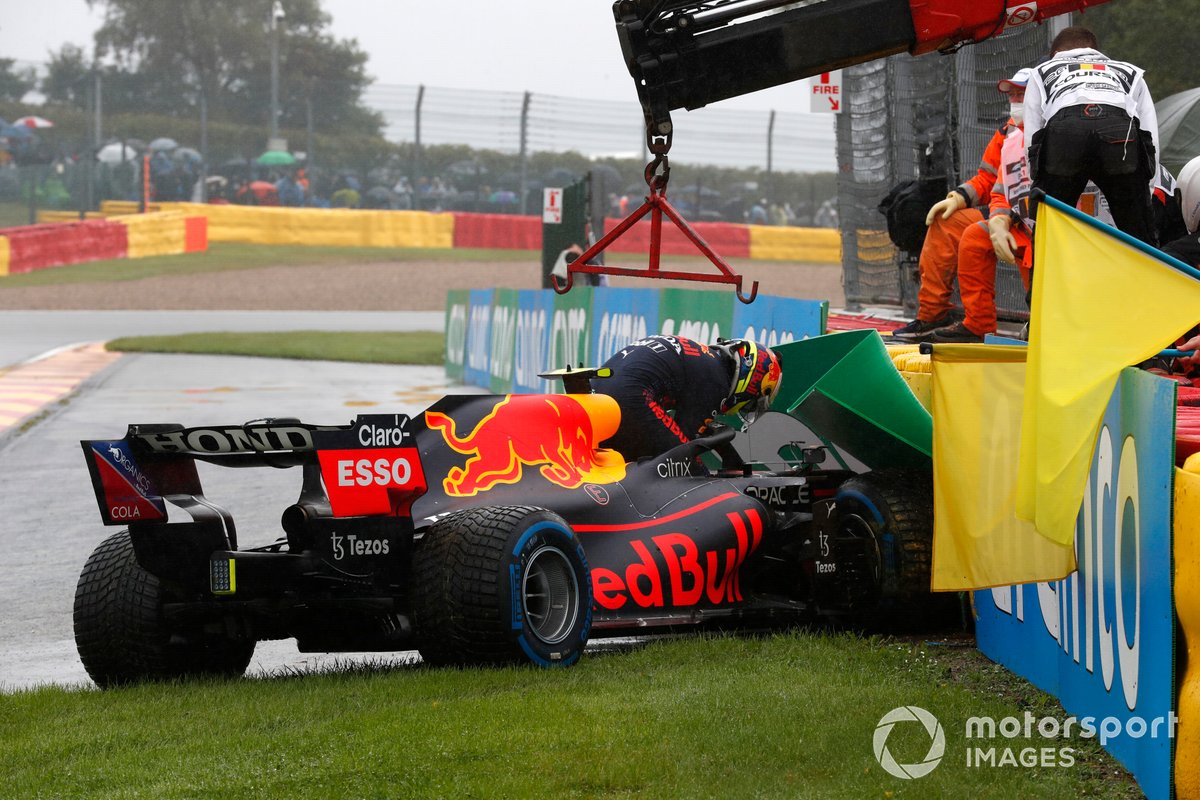 Sergio Perez, Red Bull Racing RB16B, climbs out of his car after crashing on the way to the grid

Red Bull team principal Christian Horner said that his mechanics were “working flat out” and “trying to work a miracle” to get Perez’s car repaired after the crash damaged the front suspension and both front wheels.

“It’s a much bigger impact than Max [Verstappen] had in Hungary [in 2019], so at the moment, we’re throwing everything at it,” Horner said.

“I hope if this race does restart, and who knows, it could be another hour or so delay, we could have him back in the race.

“It should be about a three or four hour job, because it’s both front corners, it’s steering rack, it’s the whole lot, so it’s a big old job. But if anybody can do it, these guys can.”

The race remains under a red flag due to the wet weather, but Masi has confirmed that the three-hour timer started at 1500, meaning there is a cut-off of 1800.