Palmer: Everything conspired against me in Australian GP qualifying

Palmer was eliminated in Q1, lapping 3.269 seconds slower than team-mate Nico Hulkenberg, who ended up qualifying 12th, after managing just 22 laps during practice on what he described as a 'strange' weekend.

The 26-year-old was happy with the performance of the car prior to his crash at the last corner during Friday's second free practice session, but struggled for performance on Saturday.

"Everything has conspired against me," said Palmer, who also failed to set a time on his first run in Q3 thanks to a fuel surge problem.

"I made my own bad luck [by crashing] in FP2, I'm the first to say, but for some reason we've turned up today and I thought I could salvage it from yesterday, but we're missing something.

"Today, from the word go, I've not been happy with the overall grip.

Palmer is unsure of the exact reasons for the transformation in the car's performance, but accepted that the crash is the root cause.

"Clearly, the crash has had a impact on the performance because pre-crash, the pace was strong.

"Post-crash, I've obviously got a lot of new components on the car and the performance is not strong.

"So from me crashing, I've lost performance."

Palmer believes the lap he was on in Friday's second practice session up to the point where he crashed would have been good enough to make Q2 had he done it in qualifying, despite running on super-softs and with 30kg of fuel at the start of the run.

HULKENBERG COULD HAVE MADE Q3

Hulkenberg revealed he wasn't completely happy with his qualifying performance, suggesting he could have reached Q3 with a perfect lap.

He lapped 0.094s slower than tenth-placed Carlos Sainz in Q2 and suggested that extra time was potentially in the car.

"I think there was," he said when asked if there was a tenth or two left on the table.

"But the conditions were changing a bit from the beginning of qualifying, the overcast [conditions] came and it started to get a bit windy.

"It seemed to affect us a little bit and we lost a bit of performance. I was struggling more with the car compared to this morning.

"I'm not 100% happy, but I think it was a decent first qualifying in the new team.

"It's very tight, obviously, a margin of one-tenth missing to make it into the top 10." 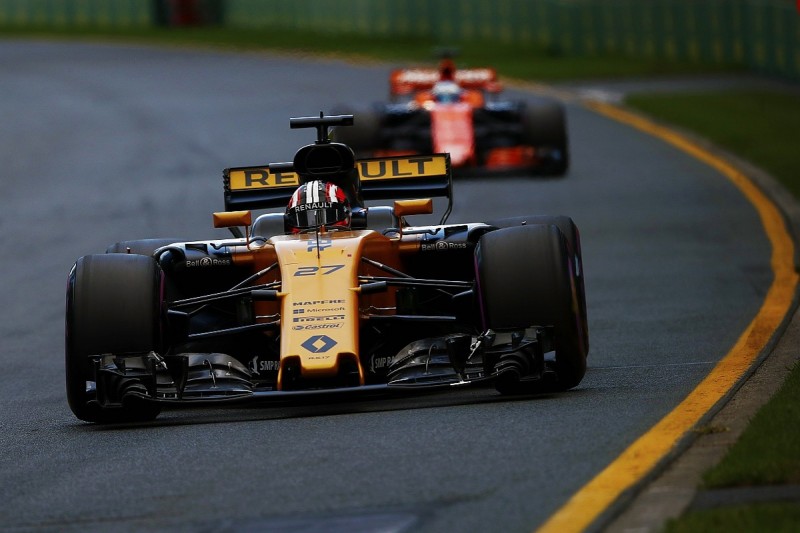 The key technical developments from Australia