The 2017 cars are faster and wider than their predecessors, with more aerodynamic performance and more grip from bigger Pirelli tyres.

Hulkenberg was quicker than Force India's Esteban Ocon in the closing stages of the race but said he could do nothing to get past.

"I was hoping he would have a little bit of a problem on the soft and I was obviously on the ultra soft," said Hulkenberg.

"But quickly I understood that it wasn't going to happen.

"And these cars, the dirty air is huge, so overtaking - almost impossible.

"I probably could have gone more than a second quicker, but it's just not in there."

Hulkenberg and Ocon were involved in a spectacular three-wide moment on the run into Turn 1 during a battle with Fernando Alonso's McLaren-Honda.

However, Ocon said it was only made possible by an unexpected error from Alonso.

"Me and Nico were a lot faster than Fernando, but we couldn't get close so that was very tough," he said.

"He did a small mistake out of Turn 12 and I managed to get close and get my shot."

Hulkenberg said that was the highlight of his race, adding: "It was bloody fast there, it was like flying because these cars give quite big tows. 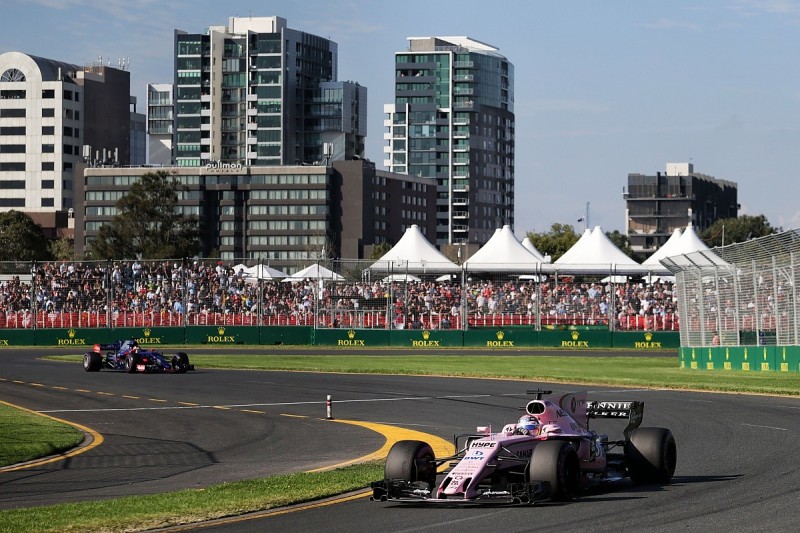 Sergio Perez passed Daniil Kvyat on the first lap and Carlos Sainz Jr round the outside at Turn 3 when the Toro Rosso was on an outlap.

The Mexican said you could follow cars closely but drivers would need a huge pace advantage to overtake in normal conditions.

"It's harder to overtake because you have shorter brake distances, shorter grip-limited zones, less degradation," he said.

"If before 1.5 seconds was enough, probably now you need two seconds."

Drivers at the front joining the midfield runners in voicing their concerns.

Lewis Hamilton said the overtaking problem is "probably worse now than it's ever been" and fears it will stay the same for the season.

Red Bull driver Max Verstappen caught Kimi Raikkonen over the final third of the grand prix but started to struggle as soon as he got "within two seconds" of the Ferrari.

Raikkonen called for patience and perspective, saying it was "never going to be easy" to overtake in F1.

"It's only one race and this circuit is far from let's say a normal circuit," he said.

"Some circuits will be more easy, some more harder in a year.

"We have to see how it goes in the next races."

"Let's wait for China and Bahrain, which are two of the more easier circuits to overtake at, before drawing any judgement."

Vettel and Hamilton relishing prospect of fight for Formula 1 title