Norris: Racing Point will be harder to beat in F1 Spanish GP

Norris will start the Barcelona race from eighth on the grid, a place behind his team-mate Carlos Sainz Jr, while Racing Point's Sergio Perez and Lance Stroll qualified strongly in fourth and fifth respectively.

In previous races the McLaren drivers have often shown better race pace than Racing Point but with the Silverstone-based team focussing on long run performance in Barcelona, Norris anticipates a tougher challenge taking on Perez and Stroll in the Spanish GP.

"I think from the race pace we saw in FP2 they looked definitely a bit stronger than us," said Norris. "But I don't think we can rule out [beating them]. We seem to be able to focus on our start, get a good start, and hang on.

"I don't think it's the easiest track to overtake on. So [it is] unlikely that if we are just in the middle of the race and I'm behind them to get past them on pure pace. I think it's going to be a bit more down to the strategy, a good lap one and a good start off the line if you want a chance.

"The characteristic of their car is similar to a certain other car, and they were very quick last year, so I don't think it's a surprise to us. They just seem to have done a good job here, and they seem to suit it a little bit more than some of the other tracks we have been to lately. 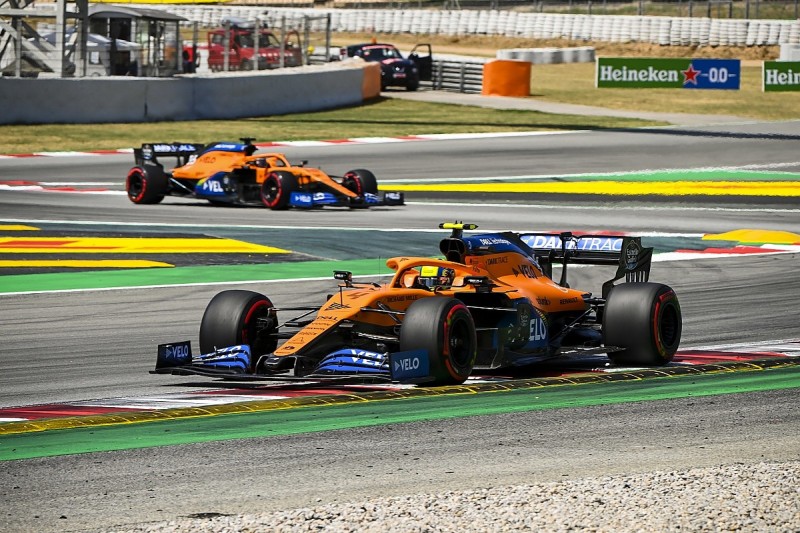 "We pretty much ran the same car as we did in Silverstone here," Seidl said.

"So obviously great to see that we could be behind the three teams that clearly have a higher-performing car than us, Mercedes, Red Bull and Racing Point, and that we could actually be the fourth quickest team at least in qualifying.

"It was great to see the job the team did overnight in order to improve the car, because we were struggling a lot yesterday. But I still think that a track like here in Barcelona with these high temperatures, and also with the winds, is not something that suits our car. And to be honest I expect a difficult race tomorrow.

"But at the same time starting in P7 and P8 obviously still puts us in a good position to fight. Hopefully we can put up a good fight and score some good points again.

"I think simply a track like Barcelona, especially in the third sector, is a track where we know we still have deficits on the car side. Something we know, and we are working on heavily as a team.

"And we made a good step here over winter with the car, especially in low speed. But of course, as always it's never enough, and we keep working on it, and hopefully we can reduce this deficit towards the following races, or until the end of the season."