Rosberg enjoyed what Hamilton termed "a Sunday drive" en route to clinching victory at Spa Francorchamps while chaos unfolded behind him on track.

Hamilton battled his way through from 21st on the grid after serving a raft of penalties for three power unit changes, his progress assisted by numerous incidents.

The reigning champion had climbed to fifth by the time the race was red-flagged on lap nine following Renault driver Kevin Magnussen's heavy shunt, before then claiming a podium place come the finish.

While applauding Hamilton for "a great job to come all the way through", Rosberg also expressed amazement at how far his team-mate had progressed.

Asked whether he was surprised at seeing Hamilton in fifth when the race was stopped, he replied: "That I didn't see. I just saw at the end.

"After the chequered flag, I looked at the results and I knew Daniel [Ricciardo] was behind me, and then I see 'HAM' in P3 and I was like 'What? Seriously?' I didn't know until after the race where he was."

It meant that instead of significantly eating into Hamilton's pre-race 19-point lead, and potentially even overhauling it, Rosberg heads into this weekend's race in Italy still trailing by nine points. 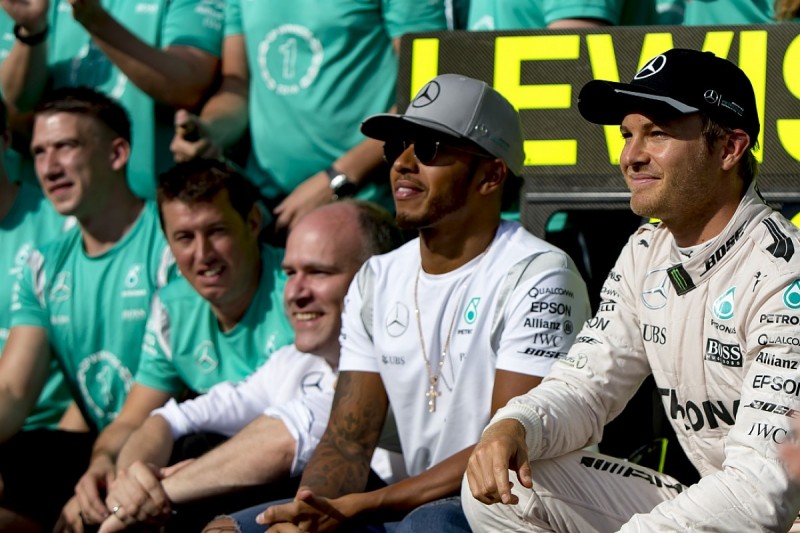 He denied he had anticipated getting closer than that given Hamilton's circumstances.

"That's not what I'm focusing on. I came here wanting to win," Rosberg insisted.

"The opposition was unusually close this weekend, not eventually in the race, but up to that they were very close.

"I'm just very happy, a perfect weekend for me.

"We did great selecting the right tyres. We were the only ones who really got it nailed with the tyre choice. Our race, the medium, was the right tyre. It worked out really well."

Rosberg also attempted to brush aside the advantage Hamilton now has in terms of additional engine components to see out the remainder of the season.

Hamilton headed into the weekend in Belgium with only one system he claimed was "on its last legs", but now has three fresh and updated engines after Mercedes used five development tokens for an upgrade.

"I don't think of it [that Hamilton has an advantage] in that sense," said Rosberg.

"I am aware of that, but he had the big disadvantage at the weekend.

"I'm just focusing on my thing and that's it. I don't think it's going to make a big difference anymore, after this."

How Spa became pivotal in the title race