Mercedes and Ferrari were outpaced by the four Renault-engined cars, but opted not to use an extra set of hypersofts in the opening session.

The usual frontrunning teams occupied fifth through eighth, headed by F1 points leader Lewis Hamilton, as they set their fastest times on ultrasofts.

Ferrari duo Kimi Raikkonen and Sebastian Vettel were the session's early pacesetters with inaugural runs on hypersofts, the fastest of Pirelli's 2018 compounds.

Sainz and Racing Point Force India driver Sergio Perez each moved to the top of the times with their own laps on the hypersofts before Red Bull took a stranglehold on the session.

Verstappen jumped to first place on a 1m18.588s, with Ricciardo lapping just over a tenth slower.

Hamilton put Mercedes on top with his best hypersoft lap, three tenths quicker than Verstappen, but after the usual mid-session lull the Red Bulls returned for another hit of the hypersofts and went even faster.

He pumped in a 1m16.596s that, even with a further improvement from Ricciardo, left him almost half a second clear at the top of the times.

Sainz claimed third on a 1m17.926s, sneaking ahead of team-mate Hulkenberg on his second run by a tenth - although Sainz was called in before the end of the session with an apparent issue. 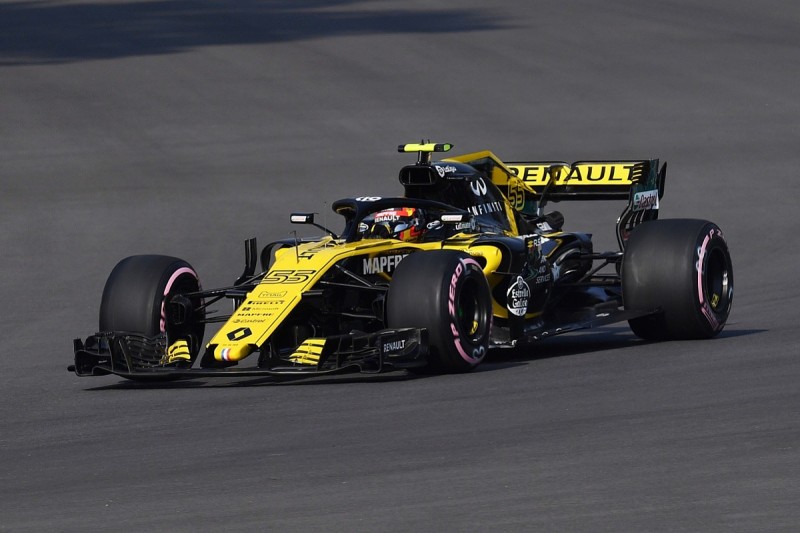 Raikkonen was eighth, having eventually improved on the ultras despite spinning on his first flying lap of the run.

Nicholas Latifi completed the top 10 on his practice one outing for Force India, using hypersofts to outpace ultrasoft-shod team-mate Sergio Perez by a tenth.

Pierre Gasly ended the session with no time and two laps to his name after completing installation laps with another new version of Honda's upgraded engine.

He will revert to a previous-spec for the afternoon having sacrificed first practice to add the new engine to his pool of available units for the final two weekends of the season.