Hamilton and Rosberg have chosen just four sets each of the super-soft compound, the fewest of any team, compared to Red Bull's six and Ferrari's seven.

Hamilton has picked six softs, one more than Rosberg, with Max Verstappen and Daniel Ricciardo choosing just three each and the Ferrari pairing going for five apiece.

Kimi Raikkonen and Sebastian Vettel have gone for just one set of the medium, with Verstappen, Ricciardo and Rosberg choosing four and Hamilton three.

Like Ferrari, Williams has selected seven sets of the super-softs, which is the most of any team, plus three softs and three mediums.

Its rival for fourth place in the constructors' championship Force India has gone slightly different, with Nico Hulkenberg and Sergio Perez taking one fewer super-soft set in favour of an extra set of softs.

Not for the first time this season, Sauber pairing Felipe Nasr and Marcus Ericsson have favoured the softer rubber, choosing just one set of mediums plus five softs and seven super-softs.

Aside from Mercedes, Haas is the only team to have its drivers on varying tyre strategies with Romain Grosjean choosing an extra medium and one fewer soft compared to Estaban Gutierrez. 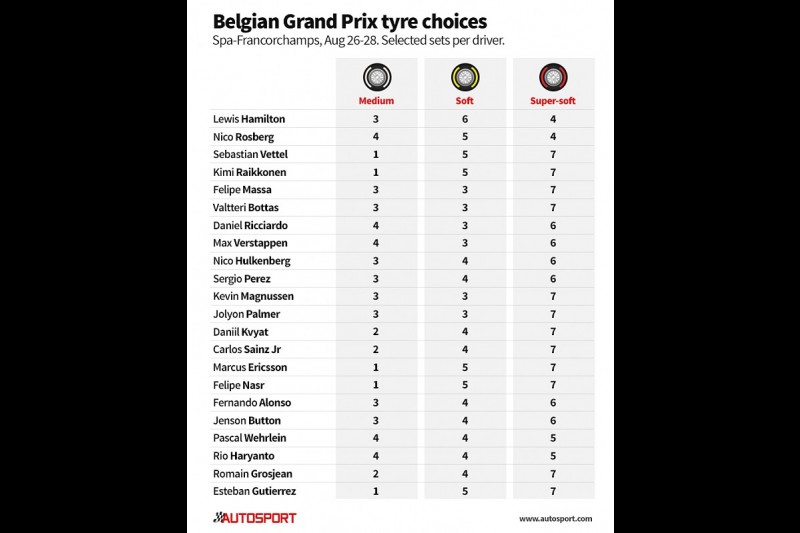